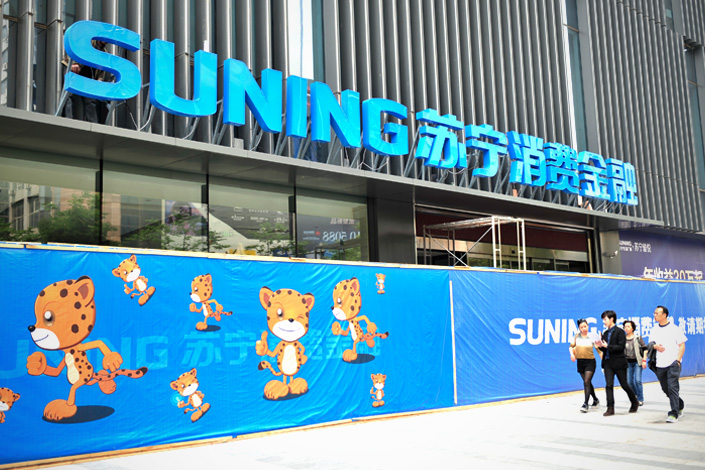 A branch of a Suning home electronics store prepares to open in Nanjing, Jiangsu province on April 25, 2015. Photo: Visual China

(Beijing) — Two investor groups, one including retailing giant Suning and another with filmmaker Enlight Media, have become the latest recipients of new private bank licenses under a Beijing program to invigorate a financial services sector dominated by state-run companies.

Suning, best known for its national chain of brick-and-mortar home electronics stores, said it will hold 30% of the new Jiangsu Suning Bank, while solar company Solareast will be another major shareholder with 23.6%. The bank will have registered capital of 4 billion yuan ($576 million).

Enlight said it will contribute 396 million yuan for 9.9% of the new Zhongguancun Bank, named for a famous high-tech Beijing suburb. That shareholding will equate to a total capitalization of 4 billion yuan for the bank. Another stakeholder will be OriginWater, which said in a separate statement it will hold 27% of the bank.

The new banks are part of a central-government program begun in 2014 aimed at allowing China's dynamic private sector to open banks. The industry traditionally has been dominated by state-run institutions, which are often slow-moving and beholden to local government stakeholders.

Such traditional banks also have limited experience lending to private-sector companies, creating a vacuum that has been filled by a boom in gray-market lenders. Beijing worries that such lenders could pose a huge risk to China's financial sector because they often raise money from ordinary investors and lend it out with little or no regulatory supervision.

Two of the earliest private bank license recipients were groups that included Internet titans Alibaba Group Holding Ltd. and Tencent Holdings Ltd. But progress for the former's MyBank and the latter's WeBank has been slow, partly due to stiff restrictions that limit the new lenders to online-only operations and so far have prohibited them from raising money by taking customer deposits.

The latest two licenses bring the total awarded under the program so far to about a dozen.