WeChat Cracks Down on Online Donations for Unauthorized Religious Services 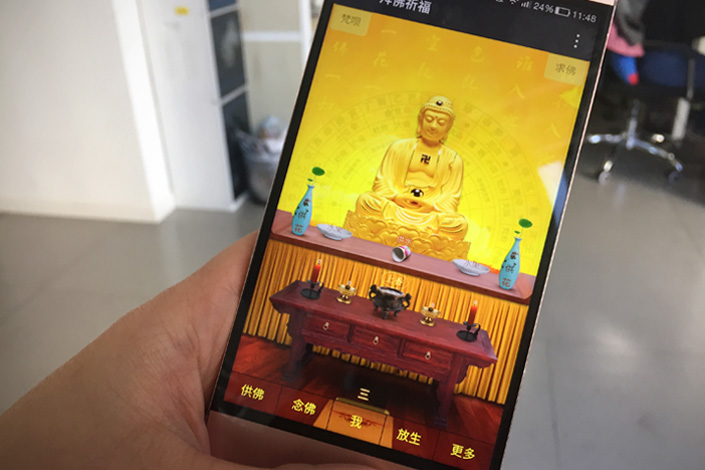 Public accounts on Wechat pass themselves off as religious organizations and seek donations from users. Tencent's WeChat team said in a statement on Monday that the company will ban links for providing such donations. Photo: Caixin

Users who are not registered religious organizations are no longer allowed to solicit donations to perform virtual or real rituals, Chinese tech giant Tencent Holdings Ltd., which owns WeChat, said in an announcement Tuesday.

Many public accounts on WeChat that link to Buddhist temples allow followers to pay for religious services such as lighting candles, offering incense or releasing live animals, which in Buddhism are meritorious acts. These services, which are sometimes free but can cost anything from a few fen to hundreds of yuan, are meant to be either performed in real life by monks or owners of the public accounts, or placed on a virtual-altar interface.

Some accounts offering such services are affiliated with legitimate religious organizations. However, many are run by commercial entities or individuals looking to take advantage of devotees, Beijing News reported.

A few of the accounts found by Caixin to be offering virtual religious rituals, such as Baifoqifu ("Worship Buddha and pray for luck") have now disabled the paid sections of their donation platforms. The paid services offered by some accounts, such as Wanrenbaifopingtai ("Ten thousand users' worship platform"), have been blocked by WeChat and replaced with a warning that the account had been used illegally and had been "flagged by multiple users."

WeChat's announcement comes after widespread complaints on social media by many users that their middle-aged parents were getting scammed by religious donation platforms. In October, Minghua, a user on China's biggest question-and-answer site Zhihu.com, wrote a post detailing how her mother was regularly paying small sums of money to fake religious organizations on WeChat.

"My mother thought that whenever she purchased a ritual online, someone would perform it in real life, offline," Minghua said. WeChat religious donation platforms, especially those equipped with virtual "altars," do not always state clearly whether a devotee is paying for an offline service or a virtual one.

WeChat, which people in China use for services as diverse as online shopping and paying electricity bills, has become an increasingly popular platform for organizations or individuals to raise funds. But regulating millions of user accounts has proved a tremendous challenge.

Earlier this month, a family in southern China raised over 2 million yuan ($288,000) after posting a story on WeChat about their 5-year-old daughter who had been diagnosed with leukemia. The amount raised was far more than the 36,000 yuan they needed for treatment, and the donations poured in despite the app's daily cap of 50,000 yuan per individual recipient for online donations. WeChat later attributed this to a temporary glitch in its system, which failed to raise an alarm and stop transfers once the daily limit was reached. The family was also found to have falsely stated that the child's treatment was not covered by insurance.