By Han Wei and Liu Shuangshuang 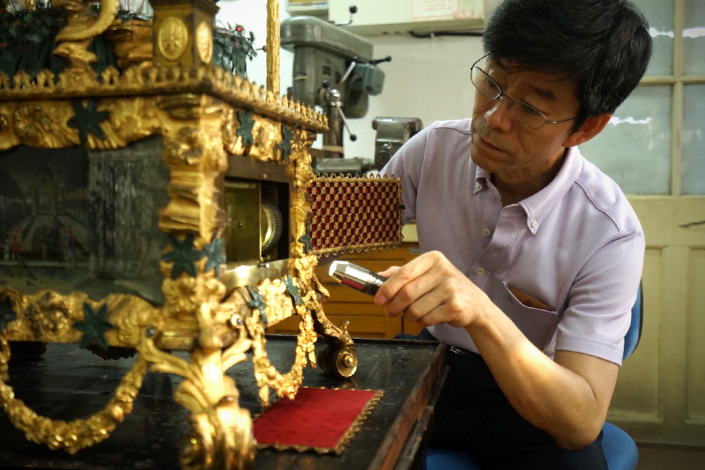 Wang Jin, a craftsman at the Forbidden City, restores a clock which used to belong to Emperor Qianlong. Photo: IC

On the same day that veteran director Zhang Yimou released his big-budget historical fantasy The Great Wall, a documentary by a lesser-known filmmaker hit the big screens. Masters in the Forbidden City, which follows the lives of relic restorers in China’s imperial palace who are painstakingly piecing together antiques thousands of years old, made a strong box office showing despite being shot on a shoestring budget of 1.5 million yuan ($216,000).

The film, which took director Xiao Han nearly five years to make, is a big-screen adaptation of a documentary with the same name that went viral online after being aired by state broadcaster China Central Television in January 2016.

The 86-minute feature film, which lacked the multimillion-dollar marketing budget of its rival Hollywood blockbuster, has still managed to win a cult following among millennials and has even spawned an internet meme. The “spirit of craftsmanship,” which forms the central theme of the movie, is now widely used on the Chinese internet to mean “the lifelong pursuit of beauty and perfection.” The original three-episode TV documentary attracted over 2 million views and led to a flood of applications for jobs at the Palace Museum, with over 20,000 applicants gunning for 100 vacancies.

The film takes viewers into a courtyard named Xi San Suo in the Forbidden City, where most of the antique restoration work is now carried out. The director follows a small group of artists, including 38-year-old Qu Feng, who have been breathing life into countless treasures tucked away in boxes covered in dirt and mildew.

Qu joined the team to restore sculptures after he graduated with a doctoral degree in Chinese arts. Critics say the filmmaker’s unvarnished portrayal of the life of these artists is one of the reasons for its popularity. For example, Qu complains that he felt disgruntled at the start of his career because he felt more like a carpenter. But years of working in the Forbidden City have taught him to be patient, Qu said.

“Many people think restoring artifacts is only about fixing antiques, but it is not that simple,” he says in the documentary. “Restorers need to understand the object and communicate with it during the process.”

Qu says it took him years to understand this “spirit of craftsmanship,” which involves both patience and persistence. It is a theme that runs throughout the movie along with anecdotes showing the virtues of self-sacrifice. For example, all textile restoration experts are young women, and they are prohibited from wearing makeup, perfume or nail polish because chemicals can damage the brittle textiles.

The quiet lifestyles of these artists and the sense of timelessness in the work they do has endeared them to netizens born in the 1980s and 1990s, who are complaining about the hollowness and fast pace of modern life.

“These restoration workers are careful and meticulous just like the craftsmen in the old days. They seem to be out of tune with modern times. But they are witnessing history as it unfolds,” wrote one internet user.

“By showcasing the daily life of restorers in the Forbidden City, the series demonstrated the refined and focused character of craftsmen,” wrote another internet user writing under the pen name “Mack” on Douban.com, a popular movie and book review site.

The Palace Museum is home to China’s largest collection of relics, with over 1.8 million documented pieces collected during the Ming and Qing Dynasties between 1420 and 1912. After China’s last emperor, Pu Yi, was overthrown by revolutionaries, this once-impenetrable imperial palace was turned into a museum in 1925 and opened to the public.

Ancient bronze vessels and porcelain, traditional paintings and masterpieces of calligraphy, as well as delicate wood carvings dating back hundreds of years draw over 10 million visitors from across the world each year to the Palace Museum.

Restoring these artifacts and preserving them is a mammoth task. And most of the time, restorers need to follow ancient techniques that cannot be learned from books. Xiao’s work shows how restorers spent months or even years repairing a piece of old furniture, testing the best materials and carefully selecting the most appropriate techniques. It also shows how it may take months for a conservator to slowly remove a fragile painting — hundreds of years old — from its old frame to clean it and restore it.

Many of the young restorers in the group, like Min Junrong, incorporate the knowledge passed down from old masters in their daily work. Generations of conservators have worked in the Palace Museum in the nine decades since the Chinese monarchy collapsed. Many master craftsmen from the previous generations had joined as apprentices in their teens and had followed old rules passed down from generation to generation, mainly as an oral tradition. But Xiao’s documentary focuses on young restorers who were born in the late 1970s and 1980s, some armed with college degrees and comfortable using both modern technology and ancient techniques in their preservation work.

Min, in his 30s, joined the Palace Museum in 2004 to restore lacquerware. He started off as an apprentice and worked his way up to become the head of the lacquer restoration team and has repaired over 100 pieces of lacquerware in the past 12 years. From the concentration of glue to the use of fillers, Min says it took him years to understand how to preserve antiques with the least damage to the original.

Xiao’s team shot nearly 120 hours of footage for the original documentary, which also digs deeper into China’s diverse craft traditions, some of which are now on the verge of extinction. Although documentary filmmakers have received a particularly raw deal in China, with just 14 films making it into theaters in 2014, Xiao said the unexpected success of Masters in the Forbidden City may signal a growing interest in works that showcase China’s history and traditions.

In an interview with Caixin, Xiao said he sometimes “felt sad” about China’s documentary industry as it is so marginalized in the country’s culture scene. “This is abnormal,” he said.

Born in 1971, Xiao graduated from the China Academy of Arts, with a degree in traditional Chinese painting. He started directing documentary films in 2010. One of Xiao’s best known works is Himalaya: Ladder to Paradise, released in 2015. For that film, Xiao’s team spent four years in the mountainous regions of Tibet filming a group of young Sherpas at a mountaineering school, who wanted to become assistants to Mount Everest climbers. The film raked in 11.6 million yuan at the box office, better than the average earnings for most documentary films released in China.

Xiao equated the long, hard road to making a documentary to the years of patience needed to restore an antique. “I witnessed how clock restorer Wang Jing spent 200 days to reassemble an exquisite ancient clock with over a thousand broken parts, and making it tick the way it used to hundreds of years ago,” he said.

“It is a process of countless repetitions. The restorers deserve respect because we are in a time where patience is in short supply. But we must learn to be patient,” Xiao said.