By Wang Jing and Coco Feng 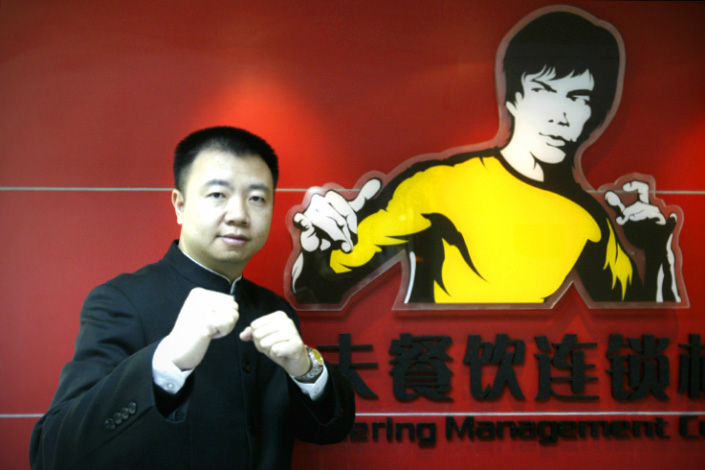 The High People’s Court of Guangdong Province ruled in December that company Chairman Pan Yuhai should return an equity transfer fee of 75.2 million yuan ($10.8 million) to his predecessor, Cai Dabiao, as well as pay interest based on real-time loan rates.

The case began in 2010 when an equity transfer contract between Pan and Cai was signed. The latter made payment two months later, only to find that the transfer hadn’t been processed until recently.

Pan didn’t let the transfer go through, arguing that Cai was involved in a criminal case. Cai was arrested in 2011 after Dou Xiaolei, Pan’s wife and a supervisor at Kungfu, told the police Cai and several other executives were allegedly embezzling from the company.

Cai’s case ended in 2014 when he was sentenced to 14 years in prison for misappropriation of funds and embezzlement. Cai also had 1 million yuan worth of personal assets confiscated.

In order to fund the 75.2 million yuan deal, Cai took out bank loans worth more than 40 million yuan and borrowed more than 30 million yuan from the company — but he had been unable to return the money since he didn’t own enough equity, a source close to Kungfu told Caixin.

Cai and his family organized auctions to sell some of his equity in the company to repay the debt, but two such events were canceled. A spokesperson from Kungfu said the company didn’t agree to the equity spinoff being sold at auction, the Southern Metropolis Daily reported.

The source close to Kungfu said it was uncertain how and when Pan will return the money.

“If the judgment has to be forced to execute in the end, we will apply to the court to sell Pan’s equity at auction,” the person said.

This is only part of a decadelong dispute between the two, who co-founded the company in 2004. The conflict surfaced in 2006 when Cai divorced his wife, Pan’s sister, and began bringing in new funds and kicking out management personnel who had been close to Pan.

The conflict even influenced Kungfu’s IPO process, where plans to buy another company to launch a backdoor listing were shelved in 2009 due to the ongoing feud.

“Disputes among executives do influence the development of a company,” Huang Xiaobin, CEO of catering consulting firm Bestown, told Caixin.

Huang added that Kungfu’s success over the past 10 years had largely been a result of its focus on brand marketing as well as investment in research and development of catering technology, rather than through any real innovation.

Kungfu did not reply to Caixin’s request for comment on the court ruling.