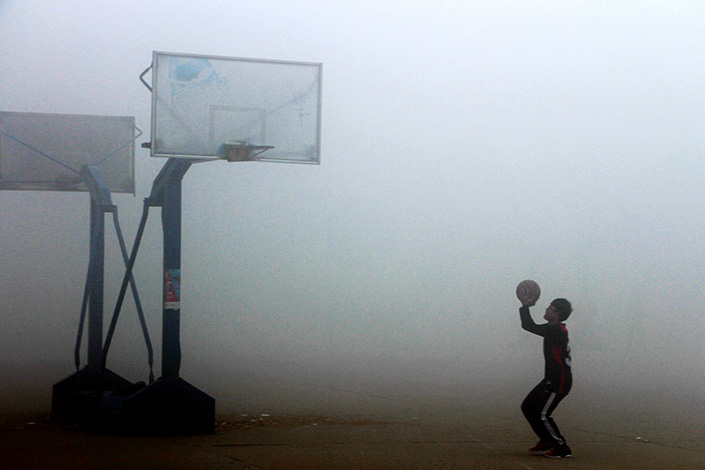 A student plays basketball during a hazy day in Liaocheng,Shandong province, on Dec. 23, 2015. Education authorities in Beijing have picked 13 primary schools for a pilot program in which classrooms will get ventilation system to fight smog. Photo: IC

(Beijing) — Education authorities in Beijing have launched a pilot program to install smog-filtering ventilation systems in classrooms at public kindergartens (preschools) plus primary and middle schools amid pressure from parents as air pollution in the Chinese capital worsens.

Authorities in Haidian, a popular school district in northwest Beijing, have randomly picked 13 schools and kindergartens for the trial, according to a person briefed on the plan.

The Beijing Municipal Education Commission said it will offer subsidies to these schools to install the expensive ventilators without specifying a sum, in a brief statement released Thursday via its official social media account on WeChat. Authorities said all public kindergartens and schools in the city will be fitted with such facilities after a review of the pilot program. But the commission stopped short of saying how long the trial will last.

For months, parents have been calling on authorities to provide the necessary protections to students in schools against severe bouts of smog. Air pollution levels have worsened in winter as coal is burned to provide citywide heating. Some concerned parents have even requested permission from regulators to buy air purifiers themselves for their children’s classrooms.

A post from a parent in Beijing that urged the local education commission to install anti-smog ventilation systems in all Beijing public schools has been widely circulated on social media platforms such as WeChat since Wednesday.

However, such pleas have largely fallen on deaf ears until now, and the commission did not explain what prompted its sudden change of heart.

The proposed ventilation system will suck in air from outside, filter out pollutants such as cancer-causing PM2.5 particles, and blow clean air into classrooms. This option has been selected over air purifiers which can remove pollutants only when used inside an enclosed space, preventing the circulation of air.

Authorities need to spend at least 10 billion yuan ($1.45 billion) to install such systems at all the public schools and kindergartens in the capital, said Tao Guangyuan, head of the China-Germany Renewable Energy Cooperation Center. The municipal government has not indicated whether parents will have to pitch in to cover the cost.

These systems require regular maintenance, and their effectiveness depends on the timely replacement of filters, said Lu Jianguo who is in charge of home appliance testing at the China Home Electric Appliance Research Institute. The cost for replacing filters as required will be massive, he said.

The middle school affiliated with Tsinghua University has installed these systems donated by a local purifier manufacturer in 11 classrooms, the school said in a statement last month.

Each classroom needs to be fitted with two sets of filters, which cost a total of about 40,000 yuan, according to a sales representative from the purifier maker.

The company produces two systems, according to the representative, and one can push the concentration of PM2.5 particles down to 35 micrograms per cubic meter of air, the benchmark for clean air according to the World Health Organization.

The other system can maintain indoor PM2.5 levels at 75 micrograms per cubic square meter of air, which is considered “good” under the Chinese government’s standard for air quality, the sales representative said.

The Chinese capital has been choked by several bouts of heavy smog in recent months. On Monday, Beijing issued an orange alert — the second-highest smog warning issued after the official Air Quality Index records a reading above 200 to 300 for three consecutive days. This level of pollution is expected to last until Saturday.