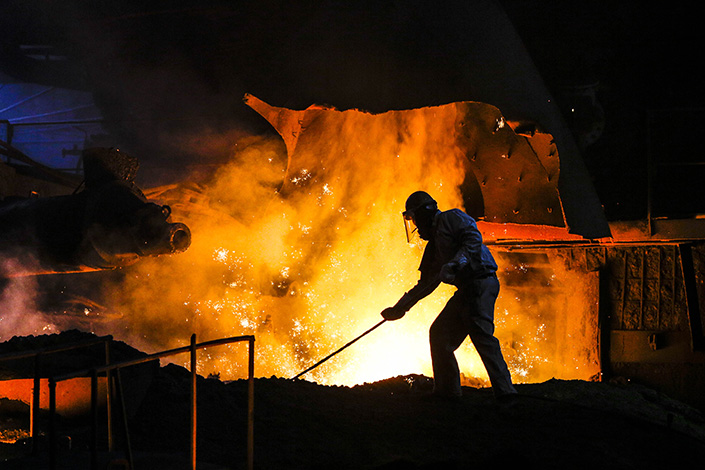 A steelworker labors in a steel factory in Lianyungang, Jiangsu province, on June 9. The Chinese goverment has said it will close all substandard steel makers by the end of June. Photo: IC

(Beijing) — China aims to eliminate all substandard steel mills by the end of June, a senior official said, in a move expected to further push up prices that are already seeing an upward trend after the central government’s overcapacity cut squeezed supplies.

The central government has sent supervisors to different provinces to ensure that all producers of so-called ditiao steel be closed by June 30, said Lin Nianxiu, a vice chairman of the National Development and Reform Commission, China’s top economic-planning agency, at a meeting on Tuesday.

The term initially referred to products that are recycled from scrap iron and steel, whose chemical composition cannot be controlled effectively. It has now been broadened to include all substandard steel products that are made without refining equipment to remove impurities and whose quality is difficult to control.

Most of these low-quality materials are made into rebar, or construction, steel, and their use in buildings has stoked safety concerns because of their poor weight-bearing capacity.

Beijing had issued similar orders previously, but the latest move was “unprecedented” in terms of its aggressiveness and broadness, “reflecting the government’s determination to deepen supply-side reforms,” Zhongtai Securities analyst Du Hui said in a report Monday.

Production of substandard steel had ground to a temporary halt in February due to sluggish demand and lower prices of better quality products, Liu Yongchang, an adviser to the China Chamber of Commerce for Metallurgical Enterprises, said in a previous article.

But output rose rapidly in July after Beijing’s drive to reduce excess steel capacity since last year sent prices higher, he said. For example, the average spot price for hot-rolled sheets, which had declined for five straight years since 2011, soared to $538.20 (3,727 yuan in today’s prices) per ton in 2016 from $307.40 per ton in the previous year, data from Bloomberg LP showed.

Substandard steel mills operate stealthily and they are not included in China’s steel capacity of 1.13 billion tons as there is no official data about their capacity or output.

The central government sent out investigators in late October to get a clearer picture of the sector, according to Chi Jingdong, a vice chairman of the China Iron and Steel Association, an industry group. Data collected recently by local authorities in Jiangsu and Shandong provinces in the east, Sichuan in the southwest, and Tangshan city in the northern province of Hebei showed that total capacity in these areas exceeded 80 million tons.

Knocking out the entire substandard steel sector within half a year is likely to hit the market hard, an industry insider who declined to be named told Caixin.

China in February announced the goal to remove up to 150 million tons in steel overcapacity within five years and officials have said that 2016’s target of 45 million tons had been achieved by the end of October.