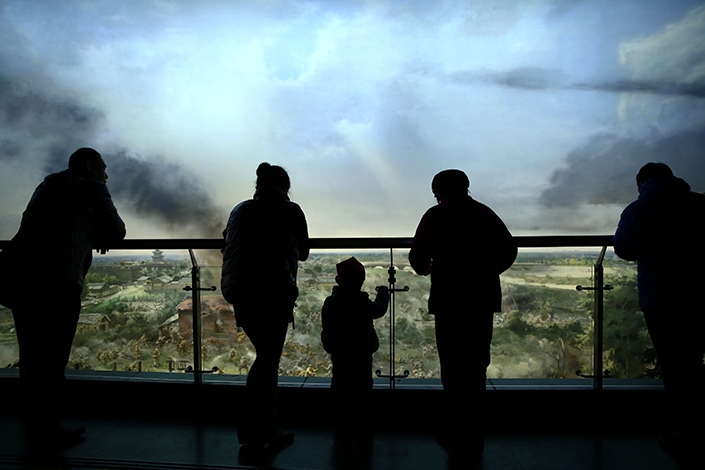 Visitors at a Beijing museum in December look at an exhibit about the 1937 Lugou Bridge Incident, also known as the Marco Polo Bridge Incident, when Japan launched an all-out invasion of China. The Chinese government is revising textbooks to state that 1931, not 1937, was when the War of Resistance Against Japanese Aggression began. Photo: Visual China

(Beijing) — China’s Education Ministry has ordered publishers to revise all history textbooks used at schools and universities to restate the date that the War of Resistance against Japanese Aggression began.

The move reflects a change in the official account of the period linked to World War II, although many Chinese historians and textbooks to date have argued the war with Japan lasted for eight years.

The ministry has issued a letter telling local education authorities to make the change in textbooks before the new semester starts in late February, after the Chinese New Year holiday, a spokesperson said.

“It is necessary to stress the 14-year history of Chinese resistance against Japanese aggression after the ‘918 Incident’ in order to fully reflect the crimes Japan had committed during its invasion of China,” the ministry said in a written response to a Caixin inquiry on Tuesday.

The 918 Incident refers to the attack of a Chinese garrison by Japanese Imperial Army troops in Shenyang, present-day Liaoning province, after an explosion on Sept. 18, 1931, near a Japanese built railway line in a rural village in the area.

Historians commissioned by the ministry to review this period had reached a consensus that the incident marked the beginning of the Japanese invasion and occupation that lasted 14 years, it said.

The ministry did not offer a reason for the timing of the change. It only said it was following instructions from the Central Committee of the ruling Communist Party issued in 2015, when China marked the 70th anniversary of China’s victory in the War of Resistance against Japanese Aggression.

Chinese President Xi Jinping explicitly referred to the war as “an excruciating 14-year-long struggle” during a speech at a military parade to mark the victory in September 2015.

Japanese trooped marched in to northeastern China as early as 1931, which led to resistance from small pockets of guerrilla fighters.

An all-out war between Chinese resistance forces and invading Japanese troops did not break out until July 1937, when the Japanese military crossed the Lugou Bridge, also known as the Marco Polo Bridge, in a southern suburb of Beijing.

Academics have been divided into two camps over how long the war lasted, with those opting for a 14-year period growing more vocal amid frosty relations between China and Japan.

Hong Yuanshu, a member to the top government advisory body from the northeastern province of Heilongjiang, proposed a revision to textbooks in 2016 to recognize “Chinese people's sacrifices during the early years of resistance against the Japanese invasion.”

To refer to it as an eight-year war is not historically accurate because it amounts to dismissing resistance fighters who began fighting in 1931, said professor Guo Dehong at the Central Party School in Beijing.