By Pan Yujing and Dong Tongjian 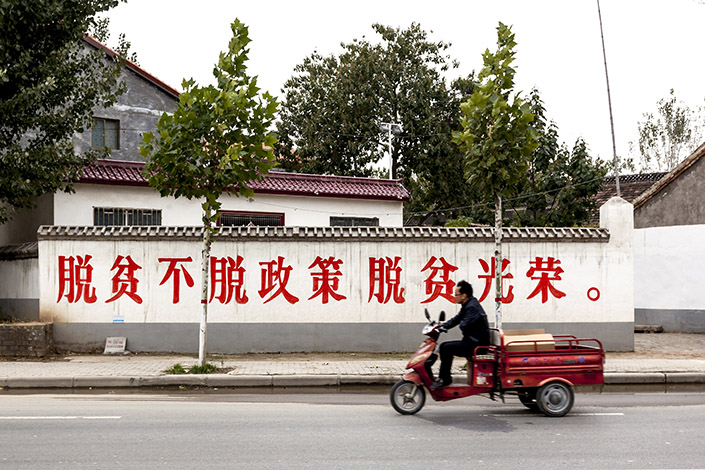 A sign in Lankao county, Henan province, in October says people should be proud to be lifted out of poverty. The Lankao government vowed to get about 80,000 people out of poverty by 2016. Photo: Visual China

(Beijing) — Sometimes poverty isn’t all it’s cracked up to be.

Poor areas in China have become magnets for companies wanting to fast-track their initial public offerings (IPOs). That’s because the government now allows companies that are located in one of the nearly 600 impoverished regions in China to jump to the front of the long waiting list of firms that want to go public in Shanghai or Shenzhen.

The idea behind the policy, which was rolled out in September, is that new businesses would help boost economic growth.

Luoyang Aojite Mushroom Co. Ltd. thought it saw an opportunity. The company, based in Henan province, was listed on China’s over-the-counter market, but wanted to raise funds from an IPO and get listed on an exchange.

The normal waiting list for IPOs has 600 companies on it, and getting IPO approval can take months or even years. So the mushroom planting and sales company relocated to impoverished Lankao county in the same central province to take advantage of the government’s poverty-alleviation policy.

Trouble is, the poverty-alleviation office of the Henan government proposed on Monday removing Lankao county from the list of poverty-stricken regions, pending public review until Sunday.

Lankao, a well-known county that has been fighting poverty for decades, had only about 7,400 impoverished villagers, or fewer than 1% of the county's population, by the end of 2015. The local government had vowed in 2016 to get all people above the poverty line by year-end.

Currently, the national poverty threshold is 2,855 yuan ($412) in annual disposable income per capita, a level the central government set in 2015.

The poverty-alleviation policy had worked for other companies. In October, two companies registered in Tibet got the nod from the stock issuance commission of the China Securities Regulatory Commission to go public about 10 months after filing the application. So far, two dozen companies have announced they are relocating to take advantage of the policy.

An Aojite company statement on Jan. 5 said that it took no more than two weeks for it to complete all the administrative paperwork and relocate its business.

Aojite has little chance of benefiting now from the poverty-alleviation policy because it states that among other conditions, the firm must have paid at least 20 million yuan in taxes in the impoverished region the previous year.