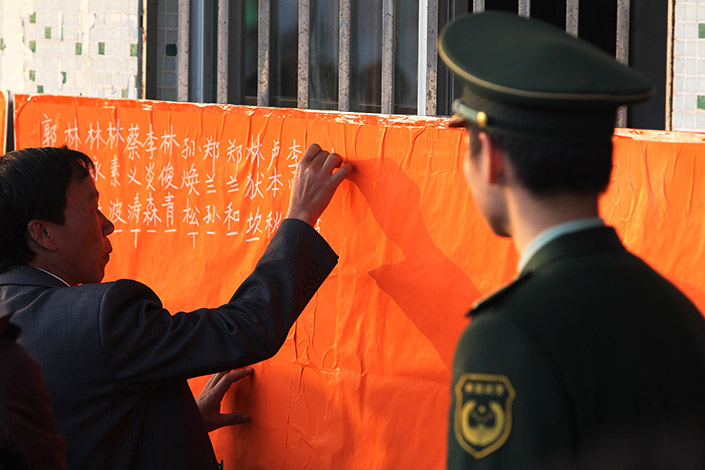 A police officer watches votes being counted after a village committee election in Wukan, Guangdong province, in February 2012. Supreme People's Procuratorate President Cao Jianming vowed over the weekend to crack down on rural village officials who abuse their power to grab land and force residents from their homes. Photo: Wu Jiang/Visual China

State prosecutors should reach out to local legislators, government advisers and public representatives to help settle disputes linked to forced relocation in rural areas, Cao Jianming told the heads of prosecutor's offices from around the country at a meeting in Beijing on Saturday.

Lawyers should be allowed to play a bigger role to help address such problems, which have become a major cause of social unrest in China, Cao said at the meeting without elaborating.

It is rare for the president of the Supreme People’s Procuratorate — the nation’s top prosecutor — to address issues linked to corruption, official intimidation and violence in rural areas, given the politically sensitive nature of such issues, according to some legal experts.

The head of a village does not hold an official rank under the country’s five-tier government administration system, which flows from the central government in Beijing down to township governments.

But village heads and the committees they lead are often given a lot of power and can influence village affairs such as land-use decisions.

Cao deserves some credit by not ignoring problems in rural areas, but he needs to go further to dismantle the protection that errant village officials get from local police and higher authorities, said Wang Cailiang, a veteran lawyer in Beijing who specializes in lawsuits linked to forced relocation to appropriate land.

"Corruption and official intimidation and violence can be seen in most cases involving forced evictions or land grabs in villages, but who has put these people in charge of village affairs, and what have the police done (in such cases)?” he asked.

Citing the example of Jia Jinglong, a farmer in the northern city of Shijiazhuang who was executed in May for killing a village head over the forced demolition of his home, Wang said before taking the law in to his own hands, Jia had taken his grievances to the police multiple times to no avail.

Jia, 30, shot the village official who had ordered to cut power and water supply to his home to coerce them to leave. Jia and his family were also beaten up by a group hired by the official before his home was demolished.

Wang said that prosecutors must hold to account those who protect corrupt village officials and bullies if prosecutors are serious about resolving land-related issues in rural areas.