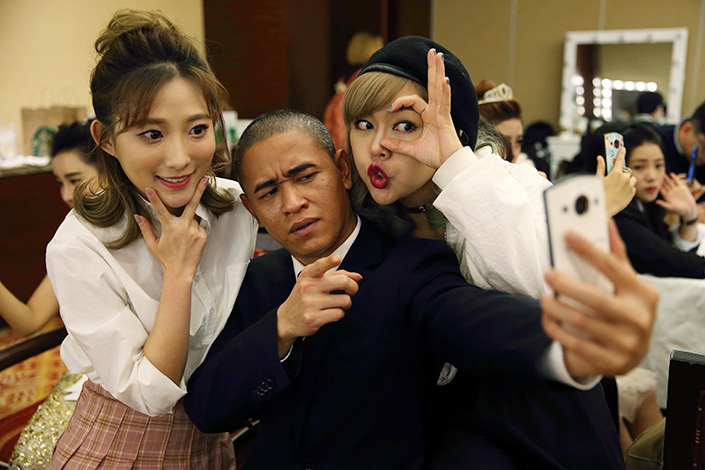 Chinese actor Xiao Jiguo (center), famous for his striking resemblance to U.S. President Barack Obama, poses with two actresses for a selfie taken by a Meitu phone in Beijing on Oct 28. Meitu has announced that internet-related revenue growth was strong in December. Photo: Visual China

(Beijing) — Beauty-app operator Meitu Inc. said its monthly revenue from internet services in December was up sharply from the first half of the year as it sought to highlight the potential for making money from its core service.

Meitu, whose selfie-enhancing app boasts 450 million active users, has met with investor skepticism since December, when it made Hong Kong’s biggest internet-related initial public offering (IPO) in a decade. The company now derives most of its revenue from one-time sales of smartphones optimized for its app, but wants to show it can earn money from sources more closely tied to its services.

Meitu said revenue from its internet-services division was 27.9 million yuan ($4 million) in December, more than five times greater than the monthly average of 4.8 million yuan in the first half of last year, according to a statement to the Hong Kong Stock Exchange on Monday.

The company attributed the big gains to strong growth in three areas, including virtual items sold through its online streaming service, branded advertising, and paid services on one of its premium products.

“The board believes the above-mentioned revenue figure represents a milestone in the group’s monetization efforts other than smart hardware,” Meitu said in the statement. “The board is cautiously optimistic about the significant monetization opportunities available to the group given its large and active user base, despite the uncertainties inherent in the mobile internet industry.”

Skepticism surrounding Meitu’s business model led to weak pricing of its IPO shares last month and an equally weak performance in the stock’s first month of trading. The company’s shares were up about 1% in Hong Kong late in the Tuesday trading day after the announcement came out. But at their current level of HK$8.27 ($1.07), they are still down about 3% from their IPO price of HK$8.50.