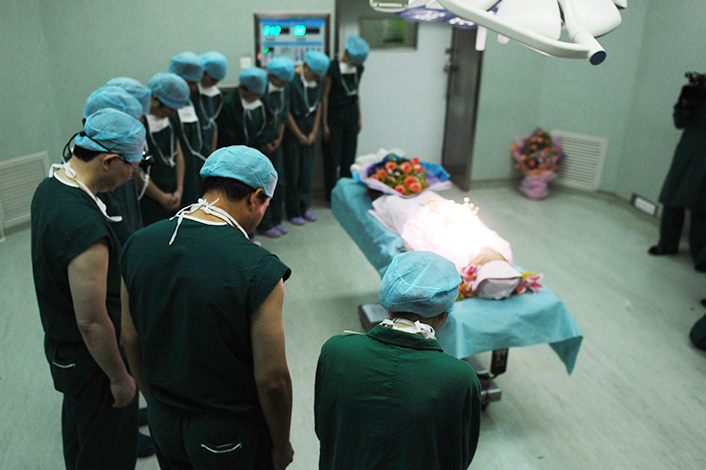 The medical staff of an organ-donation operation pay tribute to 17-year-old female organ donor Wu Huajing on Nov. 22, 2012. Real-name users of Alipay, the payment system of Alibaba, have been able to register as organ donors since Dec.22. Photo: IC

China has come a long way in reforming its organ donation system since 2005, when a then-health vice minister first publicly exposed the country’s system of harvesting organs from executed prisoners.

But the country still has far fewer donors for the number of people needing organ transplants, leaving many to die waiting, and there is still widespread mistrust in the donation system.

In 2007, the State Council, China’s cabinet, published China’s first policy statement for organ transplants, and set up an Organ Transplant Committee that was charged with helping China move to a voluntary-donor system.

A new initiative allows the 450 million users of popular mobile payment app Alipay to register as organ donors in the country’s donor database. The Alipay tie-up is expected to grow China’s donor base significantly. But there is still plenty of work to be done to make up for a persistent shortage of donated organs.

As of early December, there were fewer than 80,000 registered potential donors in China — less than one-tenth the number of people in need of kidney transplants alone. A simplified donor registration system, like Alipay’s, could boost donor numbers. But issues such as poor insurance coverage for transplant operations and a lack of trust still get in the way of thousands of transplants annually, health care professionals say.

Anhui native Wang Fu — a pseudonym used to protect the family’s privacy — had noticed some worrisome symptoms in his 2-month-old son.

The baby’s jaundiced skin, a common condition that didn’t worry the new parents at first, failed to fade to a normal shade after a few weeks. When Wang and his wife changed their child’s diapers, the contents were an unnatural shade of gray. Wang and his wife took their son to hospital after hospital before receiving a diagnosis at the Nanjing Children’s Hospital: congenital biliary atresia.

A rare disease with an average incidence of 1 in every 11,000 births, biliary atresia blocks infant bile ducts and can cause liver cirrhosis if left untreated.

Wang and his wife opted to pay about 40,000 yuan ($5,800) for a Kasai procedure, a standard treatment but with only a small chance of saving their son’s liver. The procedure didn’t work. Wang’s son was now suffering a constant fever, and his condition was deteriorating. He was going to need a liver transplant, the cost of which would not be covered by national insurance, doctors told Wang.

The couple had no steady income, but they were determined not to let that doom their child. Wang decided to donate a portion of his own liver to his son, which solved one part of their problem — finding a suitable donor.

The organ itself — even if it had it come from a stranger’s body — would have been free anyway under China’s new voluntary donation system. The operation and related costs, however, could have amounted to 300,000 yuan if the family had decided to go through the usual anonymous donation channels. Using Wang’s own liver hastened the process and cut costs by half.

Yet it still took the family about a month to take out enough loans to cover the cost of a transplant operation. By the time the money was found, Wang’s son was dead.

Wang’s story is one of many tragedies that happen each year, Beijing Friendship Hospital doctor Zhu Zhijun told Caixin. Provincial laws differ, but in general, organ transplants are not covered by social health insurance with the exception of kidney transplants, which can be paid for using the Medical Financial Assistance system.

“When the hospital hears that we’re here for a transplant, they tell us to put our insurance cards away,” the mother of a transplant patient at the Beijing Friendship Hospital told Caixin.

While inadequate insurance coverage often prevents patients from receiving available organs, a bigger problem is the lack of trust in the organ donation system, which stops many people from agreeing to donate in the first place.

Online registration is only the first step in the complicated organ donation and transplant process. Most anonymous transplants in China happen after death, and, technically, three different response teams get involved when a registered donor dies: a Red Cross Society of China office, an organ procurement organization (OPO), and the hospital where the transplant is due to happen.

First, officers from the country’s state-backed Red Cross confirm the donor’s death, and check for any contraindications like contagious diseases or tumors, which could make the organs unsuitable for transplant.

Next, the OPO steps in to enter the donor’s details into the China Organ Transplant Response System database and works to find matching recipients, after which the actual transplant can finally take place.

While the OPO attending to each donor’s death tends to be affiliated with the hospital where the transplant will happen, the Red Cross office should in theory be an entirely independent authority, Liu Yuan, an OPO officer at the Beijing You An Hospital, told Caixin. But to cut costs, many Chinese hospitals have a single doctor performing the duties of both the Red Cross team and the OPO.

This situation creates distrust and makes it less likely that patients or their relatives will agree to donating organs after death.

“The patient’s family may suspect that the hospital, which gets to determine whether the patient has died, might avoid saving the patient because it wants more organs,” said Zhu from Beijing Friendship Hospital.

Ideally, the teams confirming the donor’s death, arranging the transplant, and performing the surgery should all be independent of each other, Zhu said. China’s blood donation system, which was transformed in the 1990s and depends on an independent blood donation authority, could serve as a model for organ donations.

“An organ transplant authority that is independent of hospitals could match donors to recipients based entirely on the most important factors — distance, the recipient’s condition and place on a waiting list, and maximizing the number of lives saved,” Zhu said.

Dr. Huang Jiefu, the former vice minister who disclosed the country’s reliance on prisoners’ organs at a World Health Organization conference 11 years ago, thinks what China needs now is simply the resolve to overcome its organ donation woes.

After so many rounds of reform, “it’s no longer a matter of ethics, or of central government policy — now we just have to follow through on all the changes we’ve made,” Huang said.