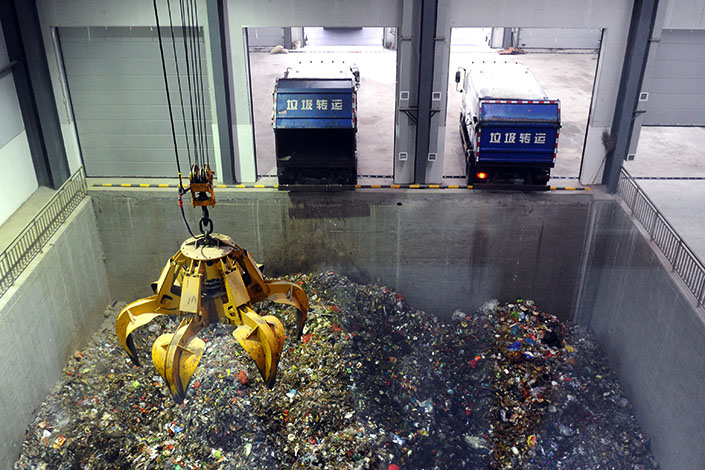 Modern waste-treatment equipment sorts trash in a disposal factory in Xinmi, Henan province, in October 2013. The National Development and Reform Commission is requiring the nation's municipalities and provincial capitals to have garbage-sorting systems by the end of 2020. Photo: Visual China

About two-thirds of the money will fund “non-harmful” methods of household-waste disposal, such as incineration, landfills and recycling, according to a statement by the National Development and Reform Commission (NDRC).

The move aims to reduce worsening soil and water pollution caused by household waste, it said.

In addition, a regulation that will make it compulsory for households and businesses to sort waste will be announced in coming weeks, according to an NDRC official who asked not to be named.

By 2020, systems will be established to sort all household garbage in the country’s four provincial-level municipalities — Beijing, Tianjin, Shanghai and Chongqing — and all the provincial capitals before it is sent to landfills, the plans said. This will allow all organic substances to be incinerated, reducing the volume of landfill waste.

Conservationists have blamed growing, farmland-encroaching landfills for soil and groundwater pollution. The government has resorted to burning waste from homes and construction sites as an alternative to landfills despite public concerns over toxic emissions from such plants.

Nationwide, facilities should be set up over the next five years to incinerate at least 60% of all household waste, the NDRC said. And at least one-third of all household garbage will be recycled into reusable products such as fertilizer.

The lack of an effective sorting system reduces the efficiency of incineration plants because garbage mixed with moist kitchen waste is hard to incinerate. The central government has earmarked 9.4 billion yuan for waste-sorting pilot programs that will be launched nationwide before 2020.