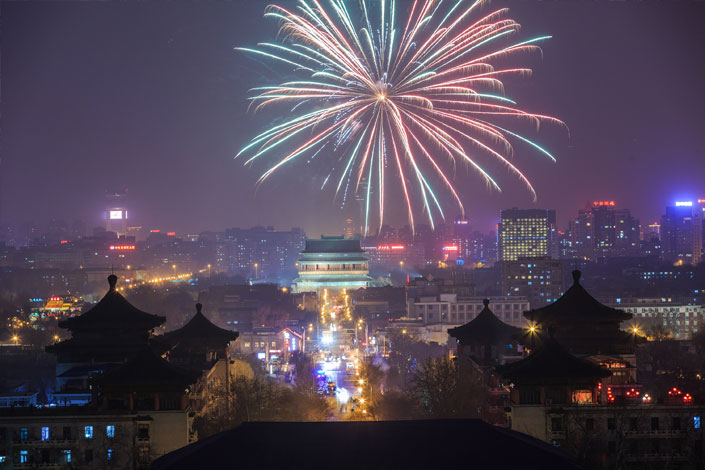 (Beijing) — Within hours after the capital welcomed Lunar New Year with traditional celebrations involving hundreds of thousands of fireworks and firecrackers at midnight on Friday, smog had returned to Beijing’s skyline, and it engulfed the city all Saturday.

Another 182 cities around the country also saw their air pollution levels soar to dangerous levels amid the heavy use of fireworks amid light winds, where eight hours earlier, just 19 cities had reported serious smog, according to the Ministry of Environmental Protection.

Lighting firecrackers and fireworks to ward off evil spirits has been a tradition that Chinese people have observed on Lunar New Year’s Eve for centuries, but the pollutants that these explosive pyrotechnics bring into the air can aggravate the environmental problems that have been worrying policymakers for years.

In cities such as Shanghai and Hangzhou, where local governments have launched fireworks bans within the downtown area, the air remained clean on New Year’s Eve.

But for cities like Beijing and Tianjin, which allowed the sale and use of fireworks at certain periods during the Spring Festival, there are cultural and economic reasons behind the practice — maintaining ancient traditions and supporting a industry that many people rely on for their livelihoods — which continue to pose a dilemma for policymakers.

The city of Liuyang, in the east of Hunan province and nicknamed the “Golden Triangle” of fireworks by market insiders, is the largest fireworks manufacturer in China, producing half the country’s supply.

But more severe restrictions on the use of fireworks adopted by at least seven major Chinese cities in 2017 — such as limiting the areas where fireworks can be set off and the number of shops eligible to sell them — have begun to take their toll on the industry.

Since then, it has been difficult for the city to reach its target of almost doubling its revenue by 2020, but it has been even harder for the 300,000 locals who work in the industry — nearly a quarter of the city’s population — to continue making a living.

Complaints have surfaced not just in Liuyang. The Henan provincial government in January dropped its ban on the sale and lighting of fireworks — just two days after having launched it — amid public opposition and protests from sellers, the Beijing News reported.

Firework merchants secured deals with producers in the Golden Triangle area about six months before the Lunar New Year holiday, and continued to stockpile fireworks over the coming months. But as sales plummeted after sudden bans in January ahead of Chinese New Year were introduced, the risk that stockpiled fireworks stored in warehouses could explode as temperatures rose grew more severe, several fireworks makers told Caixin.

If sales had continued to fall short of expectations, workers in the fireworks industry increasingly ran the risk of not being paid, a fireworks merchant in Zhengzhou, the capital of Henan province, told Caixin.

If the lighting of fireworks is not controlled, air quality can be greatly affected, Chai Fahe, chief aerologist at the Chinese Academy of Sciences, told Caixin.

Burning fireworks releases sulfides into the atmosphere, which not only poison the air but can also make water acidic. Fireworks at the same time can turn out nitric compounds that can release toxic oxynitrides as they burn, and increase the levels of PM2.5 particulate matter, tiny cancer-causing particles up to 2.5 micrometers in diameter, a major contributor to smog in China.

However, the air quality situation will improve if there is wind as the fireworks and firecrackers explode. Along the coastal area in eastern and southern China where wind can push out polluted particles to the sea, instead of neighboring cities, the air quality is much better than inland areas during the Spring Festival, according to an air-quality map released by the Ministry of Environmental Protection.

It is even possible for some pollutants circulating in the air to “reach the United States,” Hao Jiming, professor of the School of Environment at Tsinghua University, told Caixin.

Fireworks and firecrackers not only pose a threat to the air, but also to people. In the first five hours of the Lunar New Year, 81 people were injured and 62 fires were reported in Beijing, according to the municipal government.

The Ministry of Environmental Protection issued several requests to reduce the number of fireworks to help promote a “safe and green” New Year’s holiday.

“But you have to respect ethnic traditions,” Hao said. “It is important for people to have some excitement during the New Year.”