By Pan Che and Wu Jing 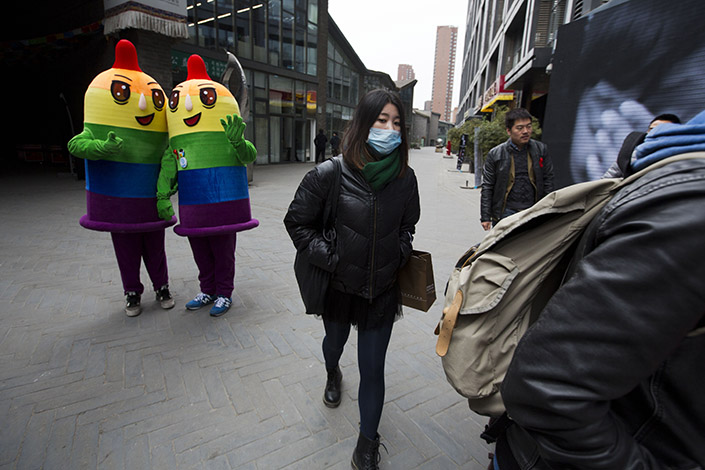 Condom mascots make an appearance at a Beijing event in November 2014, ahead of World AIDS Day, to promote awareness of HIV testing. The Chinese government has vowed to further reduce the HIV infection rate among various groups by 2020. Photo: IC

(Beijing) — The Chinese government vowed Sunday to better prevent AIDS and improve medical treatment for AIDS patients amid a spike in the number of cases among high school and college students.

In a prevention plan issued by the State Council, China’s cabinet, the central government called for increasing public awareness of AIDS prevention through nationwide education programs in a bid to reduce the infection rate among homosexuals by promoting knowledge on safe sexual behavior.

Prevention targets set for the 2011-15 period generally were generally met, with a higher detection rate of people who were HIV-positive or had AIDS, and lower fatality rates. The mother-to-baby transmission rate, which was reduced to 6.1% in 2014, saw a drop of 80% over the last decade, according to statistics released in the plan.

However, some recent developments in transmission modes showed worrying trends that present challenges to future prevention work across China.

Over the past five years, HIV infection rates among high school and college students increased 35% annually, with homosexuals accounting for 82% of infections. In 2015, the average homosexual group infection rate was 8%.

In the past, illegal blood donations, needle-sharing and mother-to-child transmissions were the main reasons for the spread of the disease in China, but these methods of transmission have now dropped to relatively low levels, the government said, adding that it would continue its efforts in this area.

Health departments were asked to establish a long-term mechanism for blood donations and to crack down on illegal blood sales while enhancing the prevention of mother-to-child transmission in remote areas, with the objective of reducing these types of transmissions to under 4% by 2020.

Currently, China lacks a national-scale law on AIDS, and the prevention and treatment regulations issued by the State Council in 2006 were set down merely as a form of administrative guidance.

Some experts suggest formal laws on AIDS prevention should be enacted as experience overseas has that a legal framework helps prevent the spread of the disease and allows patients to better access their vested civil rights relating to employment, education, marriage and privacy.