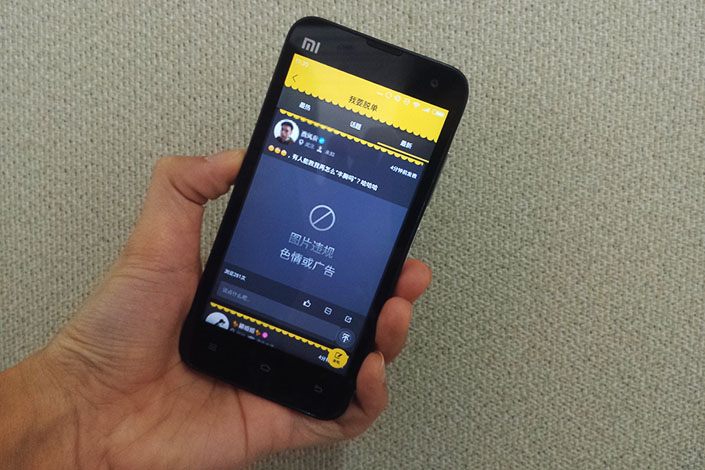 The developer of a Chinese match-making app has shut down features said to allow underage users to hook up and share pornographic content. Photo: Nana Zhao/Caixin

(Beijing) – The developer of a Tinder-like Chinese dating app says it has shut down certain features that social media commentators said allowed underage users to hook up and share pornographic content.

Shenzhen Duidui Technology Co. Ltd. has taken down the photo-sharing section of its app named Pretending to be Lovers and disabled another feature allowing users to document their past sexual encounters. These sections were found to be littered with pornographic text, photos and ads offering prostitution services, according to several users of the app.

However, a search by Caixin found pornographic text and lurid photos in another section of the app that allowed users to find dates.

Nancy Yu, the head of Shenzhen Duidui said that the app had a built-in mechanism to fend off “harmful information” and pledged more resources to “beef up content control,” according to a statement published Tuesday by Crystal Stream Capital, a venture capital investor.

The app targeting those born after 1990 had over seven million registered users as of January. Lu Han, a former member of the popular boy band EXO, was its brand ambassador.

The 26-year-old actor had also recently teamed up with New Hope Group, one of China’s largest private agricultural conglomerates, and Crystal Stream Capital to set up a venture capital fund, which owned a 3.3% stake in Shenzhen Duidui, company registration files seen by Caixin showed.

Lu was not available for comment. The actor, who was cast alongside Matt Damon in the latest Chinese-Hollywood blockbuster The Great Wall, has a huge following among fans in their 20s and adolescents.

Screen shots posted on Feb. 6, on a verified WeChat account operated by a group of former journalists from the Shanghai-based news outlet The Paper, showed profile photos and other images posted on the app by underage students in a classroom setting. Caixin could not independently verify the existence of such images on the app.

The incident is the latest in a string of scandals to hit the fast growing, but ill-regulated mobile dating app industry in China.

There are more than a dozen home-grown online dating services that are widely used and their users are vulnerable to being exposed to pornography and scams due to a lack of oversight, an employee with a Beijing-based app developer said.

App developers had largely been left to monitor themselves and regulators usually stepped in only when the number of public complaints reached a certain critical volume, said the developer who asked not to be named.

Last week, a prosecutor's office in Beijing charged a man with swindling money from a date he met online. Police found that he had extorted 6,000 yuan ($872) from a college student he met on Momo, one of the country's most popular dating apps.