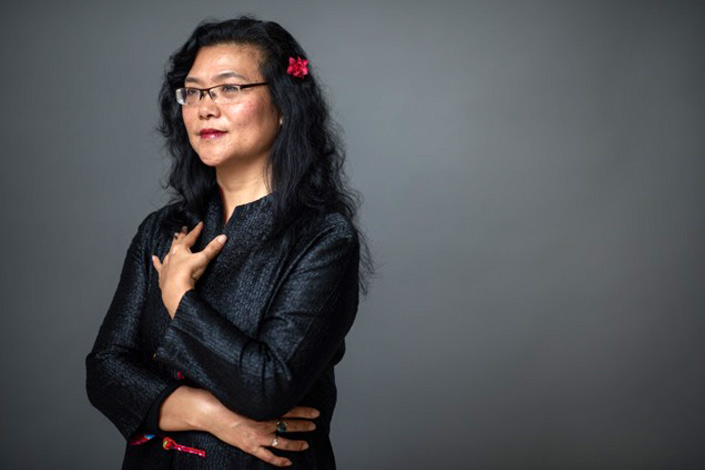 Sex, money and guanxi, or currying favor with the powerful, are recurrent themes in Lijia Zhang’s novel Lotus, which was released on Jan. 1.

The munitions-factory-worker-turned-writer said she was inspired by her grandmother’s deathbed confession of being sold to a brothel to be a “flower girl.”

“My grandma’s fate was a common one for orphans at a time when women were treated as a commodity to be bought, sold, and traded,” Zhang wrote in an essay soon after the book was published. “As soon as the Chinese Communists took power in 1949, they shut down all the brothels and reformed the prostitutes. In the reform era, however, relaxed social control and growing wealth led to a spectacular resurgence in the sex trade, especially along the more-developed coastal areas. Working girls were hired to lubricate the wheels of business negotiations — or used as bribes in the trade between power and money.”

Her latest book, set in the southern boomtown of Shenzhen, follows a young migrant woman, the eponymous Lotus, who is a Sichuan native working in a massage parlor as a ji, or a prostitute. Zhang strikes a tone similar to that her previous memoir, giving an unvarnished account of what happens to those blinded by “the China dream.”

Surviving by her wits alone, Lotus dives headlong into the neon lights of Shenzhen, determined to pull herself out of the bottom dregs of society, without realizing that the system is rigged against the millions of uprooted rural migrants like her. She struggles without the correct household registration papers and tries desperately to raise funds for her younger brother’s university fees while contriving a tale of a successful upwardly mobile urbanite to present to her family back in the village. She also toils to create a community around her through prayer, teaching local children and befriending her colleagues at the massage parlor while placating her strict boss and navigating the demands of several lovers. Lotus is a firm believer in “fate” — that people like her would also get swept up in China’s giddy pace of development.

“Prostitutes are real people,” Zhang said, “and I wanted to expose that. Most women come to prostitution through personal choice. Like any job, there are drawbacks. But their lives are not totally bleak either.” She said she started researching the book while distributing condoms to sex workers in China’s southern tech and free-trade hub, and later she spent weeks at a time in seedy back alleys interviewing women plying the trade to research the novel. The writer said she used “prostitution” as merely a literary device to reveal the current tensions and changes in China, allowing the reader a nuanced insight into the migrant population, women’s rights, and the chasm between urban and rural populations in contemporary China.

Zhang rose to prominence with her earlier story about her journey from disillusioned rocket factory girl to international journalist. Her 2008 memoir Socialism is Great! A Worker’s Memoir of the New China documents her escape from a mind-numbing job — testing pressure gauges at a Nanjing munitions factory — by studying English in secret. Her memoir reveals that Zhang spent political study sessions reading a copy of Jane Eyre hidden inside a copy of People’s Daily.

One of the few mainland Chinese writers to write in English, she has since graced pages, stages and TV screens across China and internationally. Her memoir has been translated into seven languages.

Zhang spoke with Caixin about the need to legalize prostitution to minimize police brutality, the lack of sex education, and China’s newfound hedonism — issues highlighted in her novel.

Caixin: What does your novel tell us about modern Chinese society?

Zhang: Every society has prostitution. There is a saying in China: “Bao nuan si yinyu wenbao er si yinyu” — which means once you have food and clothing, you start thinking about sex. I have always been curious about the women who fill this social need.

Chinese society has become hedonistic after Mao’s regime of sexual purity and sexual repression. China has become materialistic, restless. Other reasons for the growing sex industry include growing wealth, relaxed social control and the resulting growth in individual personal freedom. Plus, of course, China’s population is increasingly mobile. Young migrant workers often can’t bring their wives with them or establish a relationship. Imagine a young migrant laborer on a construction site who works long hours and barely leaves the site, where he probably lives too. How could a man like this possibly provide a home for his family in the city, or maintain a relationship outside the workplace?

I met many women like the characters in the novel. I met women like Xia. They are old but still in the trade. They are not always sexually appealing, but they know all the tricks of how to flirt and attract men. So everyone finds clients in some way. The oldest sex worker I met was a woman in her mid-60s. Another middle-aged sex worker had a grown-up daughter who was married. Some women really get stuck in the trade and cannot get out.

The women have to stick together, but there is jealousy there too. They will comment on appearances: “She is so flat-chested, how does she get clients?”

Prostitutes are real people, and I wanted to expose that. Like any job, there are drawbacks. But their lives are not totally bleak either.

When she becomes a prostitute, Lotus has no idea about sexual health. Her clients pay more for sex without a condom, and one man even washes out an expensive condom for later use. What are the pervasive attitudes toward sex education, and what is being done to challenge them?

Legislation says sex education should be part of the curriculum in schools, but it is not compulsory and it is not enforced. It is not on the government’s list of priorities. There aren’t calls from the public for sexual education, but there are non-governmental organizations providing information on a wide range of things, from HIV/AIDS clinics to promoting openness about sexuality.

Many prostitutes are not educated about sexual health. Their bosses often tell them that it is OK not to use a condom because they get more money that way. They will say “It looks clean” (referring to the man’s penis) and make them agree to sex without a condom. Many men will refuse to wear a condom.

One NGO promoting sexual health suggested prostitutes start using “femidoms” (female condoms) because then the women themselves could have control of the contraception and they don't have to rely on their clients wearing a condom. But the prostitutes said they cannot use femidoms because they are too big. In a raid, they will often swallow the condoms they have on their person because condoms (used or unused) will be used as hard evidence by police. But femidoms were too big to swallow so they would not carry them or use them.

The details about Family Treasure (a character in the book) washing out the condom for later use are true. I heard lots of stories like that. That brand “Golden Gun — Never Flops” is a real brand of condoms, you know!

In an early chapter, Lotus accompanies her friend Mimi to an abortion clinic. It’s quite an emotional scene, as Lotus listens to her friend’s screams from the waiting room after Mimi’s boyfriend disappears. Is abortion viewed as a social problem in China?

Abortion is quite a normal thing in China. I’ve had an abortion, my sister has had several abortions, and my mother had abortions. There is no social stigma because Chinese women don’t carry the same emotional or religious baggage about abortion that people in the West do. It is not considered a danger to society. It is just a common form of birth control, and people rely on access to abortion. Women don't get counseling after abortions as they do in Britain, for example. Most people don’t think a fetus is a human being, so it is not a problem.

Most women don’t know about other types of contraception. The information is not really available. So they just use abortions as contraception. I think this is changing, if slowly, and more women are learning about other ways to prevent pregnancy.

The novel’s ending has Lotus following her own dreams for the first time in her life. She is pregnant, but has decided to open a school instead of settling down with the father of her child. Is her choice to become a single mother a realistic one in contemporary China?

It is realistic. Single mothers exist, and they live their lives. Many live in these villages that were once stand-alone places but have now been engulfed by the city. They are supported within that community. She may not have the correct papers for the baby but they will be OK.

A woman like Lotus might marry the baby’s father just for the papers. But she may not maintain the relationship with Bing (the father) because she has realized that she can’t be herself when she’s with him. He is very selfish. He doesn't really consider her needs. He was a more-sinister character in previous versions. But Lotus has always been very strong, quite unlike the way Bing sees her.

My husband left me for a younger woman. That was horrible for me. I fell apart. But I used my breakup to understand Lotus’s struggle to deal with the crisis and to become independent.

Police brutality against sex workers has been a big problem in China, where prostitution is illegal. How unsafe is it to be in the trade given the lack of any legal protection?

Most women come to prostitution through personal choice. There is very little trafficking, there are very few women who are sold into prostitution, there are not many pimps. However, there are some cases where the pimp is the woman’s husband or brother.

Crackdowns are a big problem. The police will beat up the women and force them to confess. If the woman becomes unconscious, they will force her to drink water mixed with wasabi so they wake up. A woman I know was sprayed with a high-pressure hose with cold water, and then they put the air conditioning on. When she vomited, they made her eat her own vomit.

If they can prove that a woman is a prostitute, they will repatriate her, take her back home. Repatriation means that the woman will be sent back to her hometown in shame, and her family will have to pay a fine. That means everyone will find out the truth. They will do anything to avoid this. I know a woman who slept with the policeman but still had to pay the fine before they would let her go. They would rather borrow money to pay the fines, lose all their savings and go bankrupt than be sent home in shame.

There was a woman who worked at a high-class place in Beijing who was killed. They don’t know exactly how, but it could have been one of her regular clients or her boyfriend. When they searched her apartment, they found 200,000 yuan ($29,000) in cash hidden all over her home.

These women cannot really tell people the truth about their life in the city. It can be quite lonely. Telling the truth is the worst thing that they can do.

Catherine Sutherland is a theater artist and English teacher in Beijing