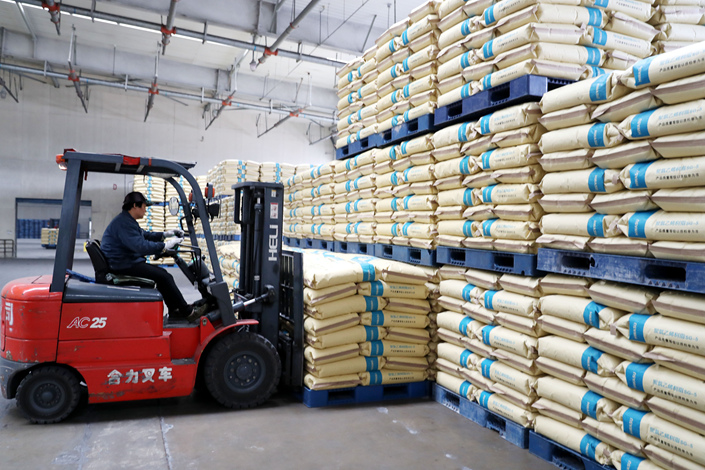 China's producer price index soared 6.9% in January from a year earlier to record its highest gain since 2011, while the consumer price index jumped 2.5% year-on-year in January, its biggest gain in 32 months. Photo: Visual China

(Beijing) — A key yardstick of wholesale prices in China increased at its fastest rate in 65 months in January as consumer inflation rose to the strongest in nearly three years, official data showed Wednesday, giving policymakers more leeway as they start to phase out monetary easing.

The producer price index (PPI), a gauge of product prices at the factory gate and a leading indicator of consumer inflation, soared 6.9% last month from a year earlier, the highest since a gain of 7.3% in August 2011, according to data released by the National Bureau of Statistics (NBS).

The January reading marks the fifth straight month of growth since a 54-month losing streak ended in September. It also beat a median forecast of a pickup of 6.6% in a Caixin survey of 11 economists.

The consumer price index (CPI), a main measure of inflation, jumped 2.5% in January year-on-year, the strongest growth in 32 months, NBS data showed. The figure was in line with market expectations.

Rising inflation is expected to provide Chinese policymakers with more room when they seek to curb new-loan growth in a bid to contain financial risks in the face of the country’s surging debt levels.

The central bank in recent months has hiked interest rates on its open market operations and other liquidity-adjusting tools — perceived by some analyst as a shift to a tightening bias.

The PPI expansion last month was led by a 58.5% climb year-on-year in prices of oil and natural gas extraction. Coal-sector prices also rose sharply, by 38.4%, according to NBS analyst Sheng Guoqing.

But overall, the year-on-year PPI increase was mainly due to low comparison figures in the same period last year, Sheng said in a statement, adding “new factors boosting prices” contributed only 0.8 percentage points to the January reading.

Month-on-month, the PPI was up 0.8% in January, down from a 1.6% rise in December and the first deceleration in seven months, NBS data showed.

Imported inflation in China is picking up steam as reflected by a year-on-year surge of 16.7% in imports last month, which was the biggest gain since April 2013.

About a third of China’s imports are commodities and analysts have said the value of the country’s purchased goods was growing much faster than the volume.

CPI was up 1.0% month on month, compared with an increase of 0.2% in December, similarly driven by higher food prices and transport and tourism costs during the Spring Festival holiday, which began on Jan. 27 this year, Sheng added.