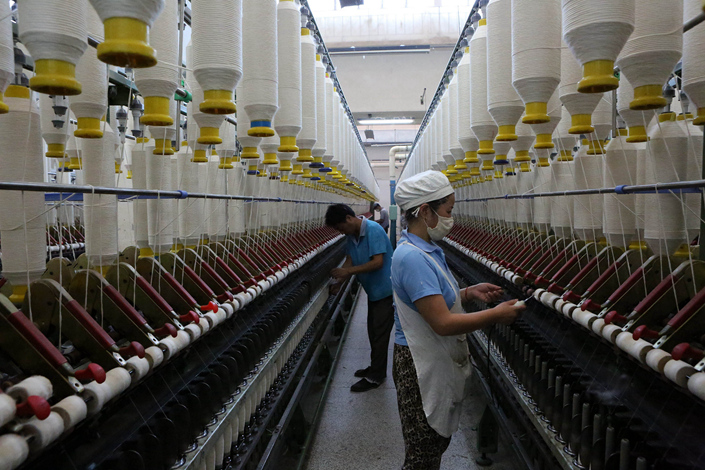 (Beijing) — Expansion in China’s manufacturing activity gained momentum in February as producers revved up output to meet an increase in new orders that were mainly bolstered by rapidly growing foreign demand, an industry survey sponsored by Caixin showed Wednesday.

The Caixin China General Manufacturing Purchasing Managers’ Index (PMI) — closely watched by investors as one of the first available indicators every month that reflects the strength of the Chinese economy — rose to 51.7 last month from 51.0 in January.

The February reading tied with that recorded in July 2014 as the second-strongest in more than four years.

The survey is based on data provided by more than 500 factories and mines across the country. A reading above 50 indicates expansion, while anything below that points to contraction.

The official manufacturing PMI, released by the National Bureau of Statistics also on Wednesday, came in at 51.6 in February, accelerating from 51.3 in the previous month.

Manufacturing activity was lifted by “improved demand from both the domestic and international markets” and growth in equipment manufacturing and high-tech manufacturing industries, NBS analyst Zhao Qinghe said in a statement.

Manufacturers remained optimistic about market prospects, as the sub-index of expectations on production and business activity rose for the second consecutive month in February to 60.0, Zhao said.

The Caixin survey showed total new orders continued to increase last month, with export businesses increasing last month at their fastest rate since September 2014, leading to a further upturn in output and manufacturers’ purchasing activities, which edged up to their strongest in over two and half years.

The cost of raw materials rose sharply in February, and firms raised output charges to protect their profit margins.

The Chinese economy came off a strong start this year, with key economic indicators, including those for trade and inflation, all rebounding.

However, Zhong cautioned that it remained too early to claim that the Chinese manufacturing industry has seen a solid recovery.

“(It) is premature to jump to the conclusion that the recovery is entrenched,” he said. “The second quarter is likely a key period to look at for future trends.”

The producer price index, a key yardstick of wholesale prices in China, soared 6.9% year-on-year in January, the fastest pickup in 65 months, as consumer inflation rose 2.5%, the strongest pace in nearly three years, giving policymakers more leeway when they seek to curb new-loan growth in the face of the country’s surging debt levels.

The official non-manufacturing business activity index came in at 54.2 in February, down from January’s 54.6, the NBS said Wednesday.