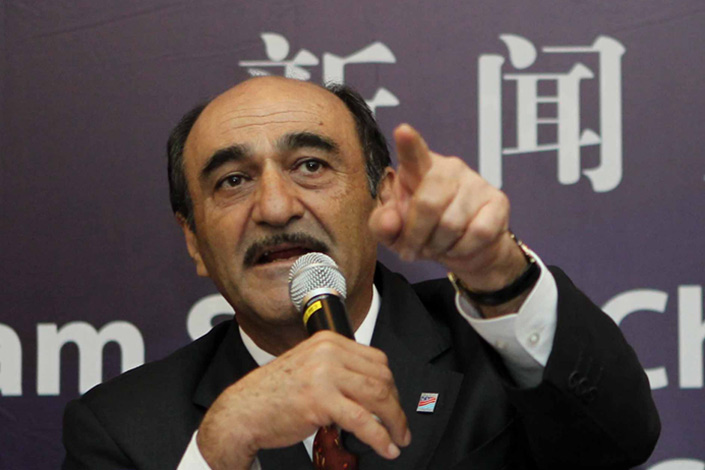 Harley Seyedin, president and CEO of First Washington Group and president of the American Chamber of Commerce in South China, speaks at a sub-forum during the UNCTAD World Investment Forum 2010 in Xiamen,Fujian province, in September 2010. Photo: IC

(Beijing) — Profit reinvesting in China by foreign and domestic companies operating in the nation’s factory-heavy south is forecast to fall this year, highlighting a possible waning of the Asian giant’s competitive edge, according to a survey by a U.S. business promoter.

Planned asset purchases with profits from previous investments are projected to decline 4.12% in 2017 year-on-year to $12.57 billion among 230 firms — about 60% foreign-linked and 30% Chinese — responding to a survey released Wednesday by the American Chamber of Commerce in South China (AmCham South China).

The projection, based on the polled companies’ 2017 budget forecasts, contrasts sharply with an 8.79% increase in reinvestment planned by those responding to a similar AmCham survey last year.

The latest findings were included in the 2017 White Paper on the Business Environment in China that detected “for the first time” a shifting of company funds from southern China to other markets, suggesting slippage for China’s competitiveness as a global investment target.

“The shift to overseas investment could simply indicate a perception starting to prevail in the business community that China may no longer be a competitive place for investment,” AmCham South China President Harley Seyedin said in the report.

At the same time, though, most of the companies surveyed said their China operations were profitable last year.

More than 80% polled reported making money in China in 2017, and 79% said they were either “optimistic” or “slightly optimistic” about the nation’s economy despite slowing growth in recent years.

Growth in foreign direct investment flowing into China has indeed tapered off in recent years, according to government data. The trend has been blamed on rising land and labor costs, as well as high business taxes. Meanwhile, big-ticket overseas investments and takeovers by Chinese companies have been making headlines in recent years.

Surveyed by the Guangzhou-based AmCham office were U.S. and other foreign companies operating in southern China’s manufacturing heartland, including Guangdong and Fujian provinces, as well as Hong Kong, the Guangxi region, Hainan province and Macau. The Chinese companies polled are what AmCham calls “friends.”

More than 20% of all respondents said that last year they reinvested some profits from Chinese operations in other countries and regions, mainly in Asia. Other popular reinvestment targets were in Europe and North America, according to the report.

Seyedin attributed the decline in planned Chinese-bound investment to what’s been called a “targeting” of foreign-invested companies. In 2014, for example, the Chinese government launched several investigations into alleged tax evasion, price fixing, illegal monopolization and other wrongdoings by foreign firms.

In one high-profile case in 2014, the British drugmaker GlaxoSmithKline PLC took heat for bribing medical workers and health organizations. The probe ended when a Chinese court handed down suspended prison sentences to five company executives.

Seyedin said a Chinese government policy that encourages converting factory land for commercial and residential real estate development — a policy linked to significantly higher land value due to the nation’s rapid urbanization — is also driving manufacturers out of China.

Unless Chinese authorities take action, he warned, “these investment losses will continue for the long term.”

An exodus of company investment could badly affect China’s exports, Seyedin said, adding that more than half of the nation’s goods shipped overseas are produced by foreign-invested enterprises.

Last year, according to government figures, foreign direct investment in China’s nonfinancial sector increased 4.1% year-on-year to $120 billion, down from a 6.4% increase in 2015.