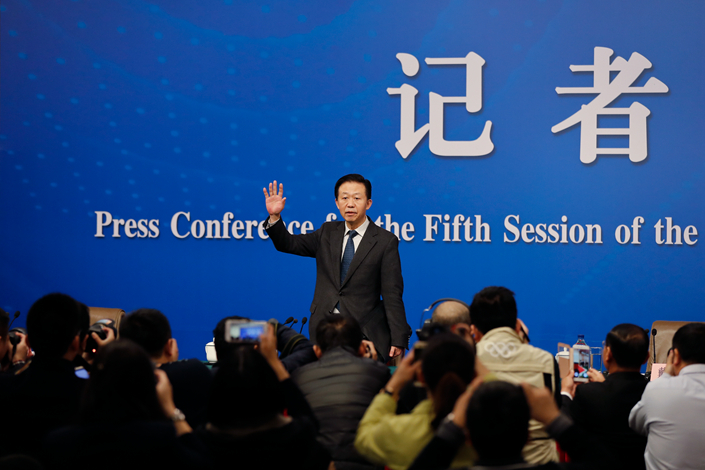 Finance Minister Xiao Jie arrives for a news conference on the sideline of the National People's Congress at the media center in Beijing on Tuesday. Photo: IC

(Beijing) — Risk from China’s budgeted government debt is under control and authorities still have room for higher leverage, the finance minister said on Tuesday, even as concerns mount about the country’s overall borrowing levels.

“The overall risk of China’s government debt is controllable because the government’s debt-to-GDP ratio is not high,” Xiao Jie said at a news conference held on the sidelines of the ongoing National People’s Congress, China’s top legislature.

Xiao made his comments after Beijing announced plans to keep its fiscal policy expansionary this year to drive economic growth, which is slowing.

The government predicts the debt-to-GDP ratio “will not have big changes” by the end of this year, he said.

“Compared with international levels, the Chinese government still has room to borrow more,” he said.

The ceiling of a debt-to-GDP ratio of 60% — established by the European Union for its member states — is seen as a prudent limit for developed countries.

However, Rong Jing, an economist with BNP Paribus in Beijing, told Caixin that the debt figure given by Xiao did not include off-balance-sheet borrowing, mostly by local authorities — such as urban construction bonds issued by local government financing vehicles — which is far more risky than a budget deficit.

The debt-to-GDP ratio likely would exceed 60% if the more-shadowy part of borrowing were counted, she said.

China has depended heavily on debt-fueled, government-driven investment in infrastructure and an overheated property market in recent years to maintain growth, with local authorities embarking on a borrowing binge.

The model has triggered concern over the exposure to default risks of Chinese banks, which often heed government orders when giving out loans; and to rising asset bubbles in the country, as economic expansion loses momentum.

Beijing has also listed fending off financial risks as one of its top priorities this year.

But Xiao’s statement indicated that Beijing is confident that it still has the financial strength to increase the more-transparent portion of government debt and raise fiscal deficit to boost growth, Rong said.

Economic growth is targeted to grow “around 6.5%, or higher if possible in practice” in 2017, Premier Li Keqiang said in his government work report, delivered at the opening of the NPC on Sunday. The economy expanded 6.7% last year.

The fiscal deficit is projected to rise by 200 billion yuan to 2.38 trillion yuan this year, although the deficit-to-GDP ratio will remain unchanged from last year’s 3%, Li said.

Meanwhile, off-balance-sheet borrowing backed by the government will likely also pick up as it has traditionally been relied on as a main pillar for infrastructure investment, said Rong of BNP Paribus.

The central government plans to invest 507.6 billion yuan from its fiscal budget this year in infrastructure construction. But as national spending in infrastructure construction was estimated to be about 15 trillion yuan a year in the past, additional funds will need to be raised through more opaque borrowing backed by the government to meet this year’s demand for investment, Rong said.

Gao Peiyong, a senior research at government think tank the Chinese Academy of Social Sciences, said in February that if murky debt such as the long-term specialized construction bonds had been included, China’s actual deficit would have exceeded 10% of GDP last year, according to a transcript of his speech at a seminar posted on Chinese news portal Sina.com.

The long-term specialized construction bonds were issued by the National Development and Reform Commission, the country’s top economic planning agency, to policy banks to raise funds for infrastructure investment.