By Li Liuxi and Song Shiqing 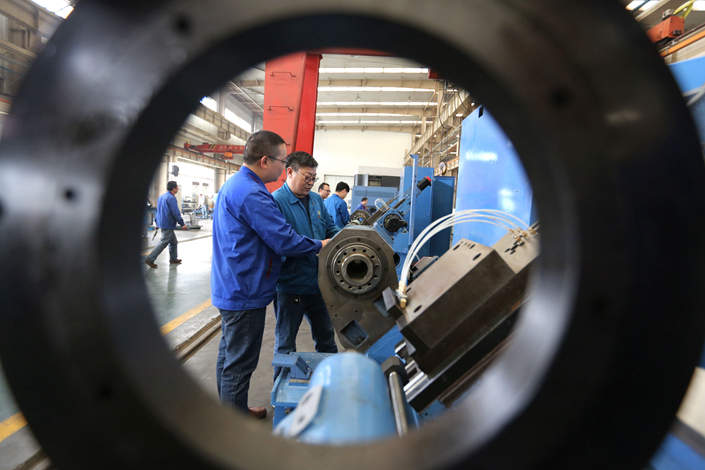 Workers assemble machine tools at a machine-tool company in Henan province on April 20. Recent bond defaults of China’s largest machine-tools producer are a reflection of the pressures facing the machinery, coal and steel sectors. Photo: IC

(Beijing) — The recent bond defaults of China’s largest machine-tools producer are a reflection of the pressures facing the machinery, coal and steel sectors, which have seen a run of corporate defaults by debt-ridden firms facing chronic overcapacity.

Dalian Machine Tool Group Corp. (DMTG) has defaulted on payment of six bonds with a combined value of 2.9 billion yuan ($421 million) since December. In several announcements posted on the website of the Shanghai Clearing House, the company said it was experiencing cash-flow problems due to product structure adjustments, financial difficulties, and a slowing economy.

It was still unknown when DMTG would be able to resolve its problems, Industrial Bank Co., Ltd. the lead underwriter for four of the bonds DMTG defaulted on said in a telephone interview on Friday. The underwriter for the other two bonds, Shanghai Pudong Development Bank Co., told Caixin on Saturday that the company would probably sell some assets, but there wasn’t currently any clear strategy.

According to DMTG’s latest financial results for its first three fiscal quarters last year, its total debt hit 18 billion yuan, including 11 billion yuan in current liabilities, which are due to be paid within a year. It also reported a 77% leverage ratio and a 20% decline in net profit to 77.2 million yuan.

The state-owned giant and its subsidiaries have also failed to make interest and advance payments totaling 396 million yuan to 17 banks as of Feb. 27.

DMTG’s nonpayments follow a series of bond defaults in 2016 by state-owned companies in the coal and steel industries — two focal points in President Xi Jinping’s push for “supply-side reform,” which centers on cutting excess capacity and reducing low-end supply to better adapt to changes in demand.

China was the world’s largest machine-tool consumer and importer for six years in a row from 2002. However, the volume of machine-tool equipment in China has reached a saturation point after a long period of domestic growth. This weakening market demand coupled with an economic slowdown at home and abroad has had a negative impact on the machine-tool industry.

The industry’s total revenue and profit have been declining since 2011. In 2015, operation revenue fell 11.6% from a year earlier and profit plunged 65.9%, according to data released by the China Machine Tool & Tool Builders’ Association.

After 10 years of rapid growth, the demand for machine-tool equipment dropped significantly in 2011 and has seen negative growth since 2012, said Mao Yufeng, vice executive director of the China Machine Tool & Tool Builders’ Association. He expects demand will remain sluggish in 2017 and 2018.

This drop in demand has spurred a number of enterprises to reorganize their production networks. Last year, Changsha Machine Tool Co. Ltd. announced that it would end the labor contracts of all its 244 employees. Global machine-tool manufacturer DMG Mori closed its Shanghai factory in September.

This downward trend as companies adapt to new levels of demand is “a period of adjustment,” according to Song Jian, assistant director of the intelligence manufacturing center of machine-tool maker Guangzhou CNC Equipment Co. Ltd. While demand for common machine tools has declined dramatically, demand for high-end products, mainly imported brands, has continued to rise.