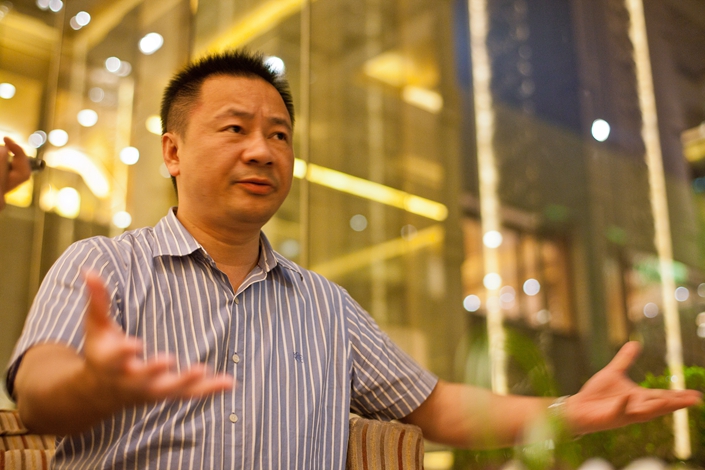 On Thursday, 130 million shares of NVC Lighting that once belonged to founder Wu Changjiang were sold on the Xianyu marketplace for 5.7 yuan each. Wu's shares had been surrendered to two of his creditors in December, after Wu was imprisoned for embezzlement. Photo: Visual China

(Beijing) — Online bargain hunters got an unusual treat this week when publicly tradable shares of a lighting company hit the internet auction block at a discount to their market price.

The Xianyu marketplace, operated by e-commerce giant Alibaba Group Holding Ltd., is better known as an online flea market for its wide array of secondhand goods. But on Thursday it played host to an auction of shares of Elec-Tech Co. International Ltd., which were being sold in a case aimed at settling debts of well-known Chinese lighting magnate Wu Changjiang.

The Elec-Tech shares being auctioned were priced at 5.70 yuan (83 U.S. cents), representing a discount to their price on the Shenzhen Stock Exchange where they normally trade. The stock was trading at 6.06 yuan midway through the Friday trading day, meaning the price represented a discount of about 6% from the latest price.

The sale of shares in two tranches raised 740 million yuan for the two creditors of Wu, founder of NVC Lighting, China’s top lighting-products maker. Wu and his shareholders were at the center of a high-profile battle for control of his company in 2012, ultimately ending with his resignation amid accusations of corporate misgovernance.

Wu’s 130 million shares of Elec-Tech made him that company’s second-biggest shareholder, with 9.3% of its stock. But a judge recently ordered that stock transferred to two of his creditors after he was sentenced in December to 14 years in prison for embezzlement.

The auction marked the second attempt by Wu’s creditors to sell the stake to recover some of their debts. Pricing for the latest sale was 5% lower than the earlier failed one.

The use of such online auctions to sell stock isn’t unprecedented, but is relatively uncommon due to the far-smaller size of average transactions on such sites. More often, such large blocks of stock are sold using private placements engineered by investment banks, which often take big commissions and also sell the shares at a discount. By comparison, fees associated with such online marketplaces are usually lower.