By Wu Xiaomeng and Wang Yuqian 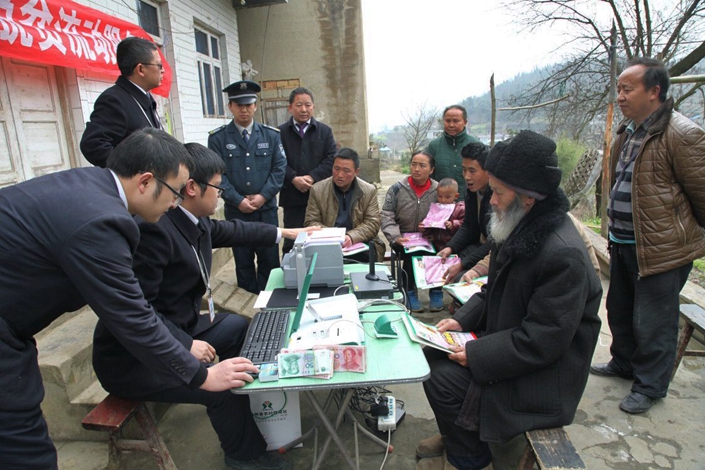 Employees of Rural Credit Cooperatives, carrying teller machines, a printer and other equipment, visit a remote village to provide financial services to villagers, in Guiyang, Guizhou province, on March 2. Bank of Guiyang President Li Zhongxiang has proposed easing restrictions that require bank customers to visit a branch in person and have their ID verified to open an account. Photo: IC

(Beijing) — The president of the Bank of Guiyang Co. Ltd. has asked China’s central bank to ease restrictions requiring people to visit a bank in person and have their identity verified to open an account.

The requirement presents a major obstacle to the bank in its efforts to extend basic banking services to those living in remote areas, said Li Zhongxiang, head of the bank in mountainous Guizhou province, at a routine news conference held by the People’s Bank of China last week.

The request highlights an issue that has troubled many advocates of internet-only banks such as WeBank and Mybank, controlled by internet giants Tencent Holdings Ltd. and Ant Financial Services Group respectively.

Both banks were launched in 2015 under a pilot program encouraging private investors to initiate, control and manage banks catering to wage earners and small-business owners, who usually find it difficult to borrow from large traditional banks.

WeBank and Mybank had counted on banking regulators that allow them to remotely confirm the identities of new customers through face-recognition technology. But the central bank has insisted on security grounds that full-service accounts must be opened in person at a physical bank branch.

As a result, every internet-only bank in the country must collaborate with traditional banks by linking accounts.

Getting a customer to visit a bank more than 10 km from their home is difficult, but trying to set up a branch near their residence may be even harder, he said.

A new branch would eventually face pressure to make money, which would be difficult given all the costs associated with hiring staff, and transporting equipment and cash to and from remote areas. “Every issue has problems that are difficult to solve,” he said.

The Bank of Guiyang used to offer a mobile identity verification service that allowed people to connect with bank employees remotely to have their documents checked with the help of technical support staff.

The service was suspended after the central bank regulation took effect in December. The rules divided bank accounts into three types, banning remote identity verification for the most secure type, which provides full access to a bank’s services and is the basis for the other two types of account. Once someone has set up a full-service account, they can open other accounts at the same bank remotely. These accounts are subject to varying restrictions such as a ceiling on payments.

The regulation marks the first official authorization of remote verification in new bank-account creation. But a customer still needs to visit a bank branch in person at least once.

Li appealed to the central bank to relax the regulation and suggested the launch of a pilot program, starting with his bank, to allow remote identity verification for all bank accounts. This would greatly facilitate the bank’s effort to reach clients in remote areas, he said.