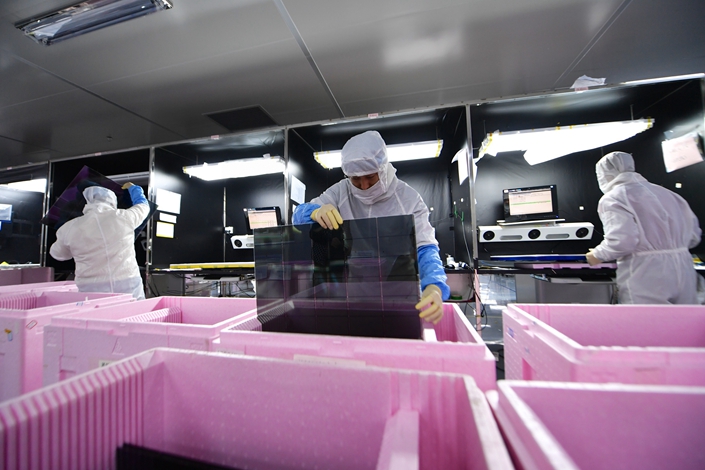 The price of 5-inch HD panels, used primarily in smartphones, has risen from $2.40 at the beginning of 2016 to $5.50 today, an executive at one of China’s largest cellphone manufacturers told Caixin.

“This round of crazy price hikes started in the fourth quarter of last year. The average increase was around 35%,” Gome Electrical Appliances Holding Ltd. executive Guo Jun told Caixin.

This is good news for panel makers. In 2016, Taiwan-based panel maker AU Optronics Corp. saw its year-on-year net profit grow 36.4%. Mainland counterpart BOE Technology Group Co. Ltd., which became the third-largest panel supplier globally last year, saw an astounding year-on-year net profit growth of 1,494.35% in 2016’s third quarter, a huge contrast from its performance in the previous quarter, during which it had a net loss.

But downstream businesses like cellphone and TV manufacturers, who have had to tighten their belts or pass on higher production costs to consumers, are feeling the heat.

This January, the price of Meizu Technology Co., Ltd.’s M5 Note went up by 100 yuan ($14.50), while in February, Xiaomi Inc. announced that Redmi 4 phones will now cost consumers an additional 100 yuan. In March, LeEco raised the price of its Le Pro 3, also by 100 yuan.

LeEco has raised the prices of its internet-enabled TV sets twice in recent months, and Xiaomi has increased prices three times this year, with its 48-inch sets now 30% more expensive than they were last year.

Almost all companies in the industry conduct transactions in U.S. dollars, so for Chinese brands targeting domestic consumers, the strengthening U.S. dollar is amplifying the effect of rising panel costs.

The current LCD panel rally has its roots in 2015, when an industrywide dip in revenues caused many panel manufacturers to cut production in 2016.

“In the second half of 2015, many panel manufacturers sold their panels at prices as low as the actual production cost,” a cellphone manufacturer told Caixin.

The higher the generation number of an LCD panel production line, the larger the panels it can produce.

In August, after it was officially acquired by Taiwan-based Foxconn Technology Group, Sharp Corp. announced its plan to break into the Chinese internet-enabled TV market, and its aim of selling 10 million sets in 2017.

To fulfill this target, Sharp will use up all 10 million panels that Sakai Display Products Corp., which Sharp and Hon Hai Precision Industry Co. jointly own, is expected to produce this year. This will leave no surplus to sell to other TV manufacturers, Sharp spokespeople told Caixin.

The February 2016 earthquake in Taiwan also disrupted LCD panel production, resulting in a major drop in supply of panels at the end of the first quarter and throughout the second quarter last year.

Even as supply shrank, demand for panels rose. In 2016, sales of TV sets in the Chinese and American markets exceeded expectations, with those markets growing 7% and 8% respectively. In saturated markets, one doesn’t usually expect growth of more than 5%, Sigma Intell director Li Yaqin said.

To make matters worse, tightened supply and rising prices have spurred some distributors to stockpile panels and further reduce the supply. An industry insider told Caixin that the mid- and low-end LCD panel market has been the most affected by stockpiling.

From Undersupply to Oversupply

Smartphone LCD panel prices have started to stabilize this year, as suppliers have increased capacity after smartphone panel prices peaked in the fourth quarter last year. But prices of large TV panels, especially those wider than 55 inches, have continued to rise.

All View Cloud’s Dong Min believes the supply of larger TV panels will continue to be tight in the first two quarters of 2017, and only start increasing in the third quarter. Panel prices will continue to rise — 65-inch panels, for example, could soon cost about $420.

Even as the LCD panel industry grapples with insufficient capacity, it needs to brace itself for an oncoming supply glut, experts warn.

Within China, many Generation 10.5 and Generation 11 production lines are being developed, and are expected to begin operations in 2018 and 2019.

In the meantime, the rising popularity of organic light-emitting diode (OLED) displays could mean a long-term tapering of demand for LCD panels.

Apple will release the iPhone 8 this year, which industry watchers predict will feature an OLED, rather than LCD, screen. Samsung pioneered the use of OLED in its phones, but Apple’s adoption of OLED technology will be the trigger for a greater wave of imitators in the industry, IHS senior analyst Xie Qinyi told Caixin.