Will China Succeed in Efforts to Woo Foreigners Into Its Bond Markets? 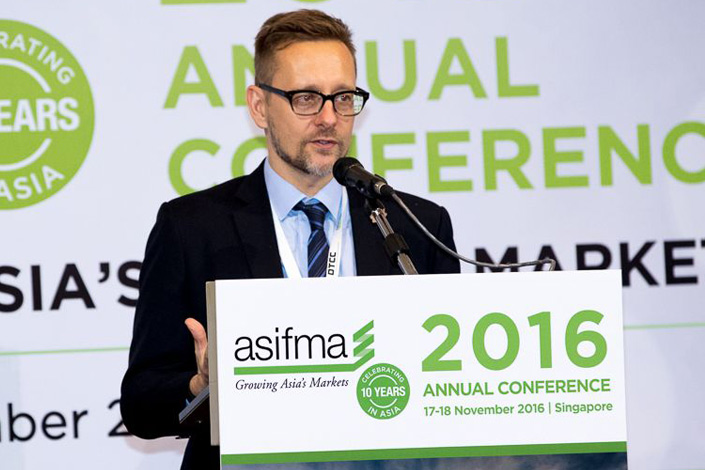 China is intensifying efforts to open up its $9 trillion bond market to global investors.

A series of recent policy changes reflect the central government’s determination to woo foreign investors, including a trial program under discussion that would connect the mainland bond market with Hong Kong, and a new policy that allows overseas investors in its interbank bond market to trade derivatives to hedge currency risk.

Will these efforts made by the Chinese policymakers really appeal to foreign investors? In an interview with Caixin, Mark Austen, CEO of the Asia Securities Industry & Financial Markets Association (ASIFMA), shed some light on the issues of trading in the Chinese bond market.

ASIFMA is an independent regional trade association with more than 100 member firms comprising a diverse range of leading financial institutions from both the buy and sell sides, including banks, asset managers, law firms and market infrastructure service providers.

Caixin: What are the major difficulties that foreign investors face in trading bonds in the Chinese onshore market?

Austen: In addition to some operational challenges, such as opening accounts in the China Foreign Exchange Trade System (CFETS), a process that is complicated and manually intensive, the market is not very liquid — lacking sufficient trades — even though it’s the third-largest bond market in the world in terms of issuance.

In February, China opened its currency derivatives market to hedge foreign-exchange risks, a big step forward to lure foreign bond investors, but the derivatives market is not very liquid either. Besides that, they are also interested in hedging interest-rate exposures by changing the fixed coupon rate into floaters, a type of bond that has the coupon rate moving along certain reference rates, such as the Federal Reserve interest rates.

Also, the repurchase market is not liquid enough. In the Western markets, even in Hong Kong, dealers that make the market, they do not always have the bond, they borrow it. If you want to buy it, but I don’t have it, I will borrow it from somebody else and then I provide a lot of liquidity to the market. You cannot do that in China. The repo market in China is a “pledge” and not a “true sell” market. If I borrow a bond, I cannot trade it with anyone else.

While China is further opening its capital market, there are still some concerns among foreign investors, including about the repatriation of profits. Do you think such concerns will dampen their interest in the Chinese market?

Qualified Foreign Institutional Investors (QFII) and Reminbi Qualified Foreign Institutional Investors (RQFII) are not allowed to send profits abroad that are more than 20% of its total investment in China in any given month. The other channels, like the stock connects between Hong Kong and Shanghai and Shenzhen, and the registration model for the interbank bond market, do not have such restrictions. It’s not fair to participants in the QFII and RQFII program. They were supporting China in the beginning. But China offers a more liberalized mechanism in favor of new investors that existing participants cannot enjoy. It will really undermine the confidence in the market as China treats the investors differently.

Chinese companies have issued ever more bonds overseas, but we have noticed that most of the investors are actually sub-branches of Chinese lenders abroad. What are your comments on this?

When the renminbi at some point does appreciate against the dollar, you will see more foreign investors in the bonds issued by Chinese companies. Foreign investors will jump in when Chinese banks jump out. That’s why foreign investors are good to China’s market — because foreign investors have a different market philosophy. Having a reasonable but not overwhelming number of foreign investments is positive for the economy and will also help the overall financial stability.

I will keep an eye on Chinese foreign debts. As you can see, Chinese offshore debt has been growing substantially. All of a sudden, China will have more foreign debt exposure, which will be a big danger, as the dollar strengthens and the Chinese yuan weakens. When these companies are not able to pay back their foreign debts, there will be a financial crisis, and it will hurt the confidence of the market.

I don’t think what China is doing is wrong, but I think the government has to watch the size of the overall debts. I’m confident that China is able to deal with it, but social stability, getting debt under control and keeping growth at 6.5% are not going to happen at the same time. You have to restructure very quickly. No countries are able to continue to manage this.

In a bid to further open up its vast bond market, China is considering launching a bond connect program with Hong Kong. Will it give a boost to the Chinese bond market?

We are unsure about how much the bond connect is going to bring to the market. It’s too expensive.

If foreign investors want to trade the bonds locally, the CFETS is actually not the best place to trade at this point of time. In practice, trading is more likely to go through brokers over the phone or in a chat room on WeChat, a popular messaging mobile application offered by internet giant Tencent Holdings Ltd. The Hong Kong Stock Exchange doesn’t have a fixed income platform, and is not connected to the fixed-income investors or traders or portfolio managers around the world.

For foreign investors, especially the big ones, they’ve already had direct access to China’s bond market. Bond connects will only attract investors who are not making major commitment to China, who just want to dip their toe into the market with a little bit exposure. This is a good mechanism for them not to have to do a lot of paperwork or to set up settlement accounts.

What is your view on renminbi internationalization?

Our view is that RMB internationalization shifts from an offshore phenomenon to an onshore phenomenon. To allow foreign investors to access the market here actually enhances RMB internationalization because it means major investors and issuers can issue and trade onshore where there is more liquidity than offshore. This is where the market really is. And it’s fine as long as foreign investors can move that money back out if they want to.

Do you have any suggestions to foreign investors who want to participate in the Chinese capital market?

China is so unique. China doesn’t need to apply all the global standards. Investors should be aware of that. It’s no different from the U.S. The U.S. sets its own rules quite often as well. It has the economic power behind it to bring the rules to the rest of the world. A lot of global standards are based on original U.S. ones.