Alibaba Sweeps Out Taobao Pirates, But Fakes Remain in the Cracks 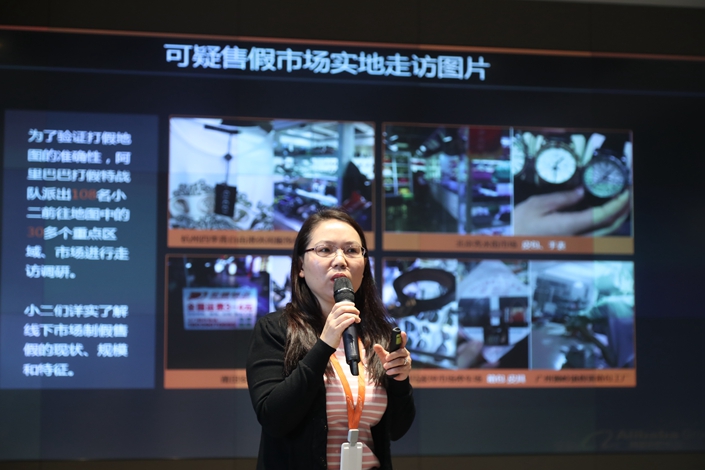 Alibaba, it seems, has made good on a promise to sweep Taobao clean of counterfeits, including fake luxury products.

Alibaba ramped up a long-running, anti-piracy campaign in December after Taobao was slammed as a knockoff platform in an annual Notorious Markets report issued by the American government's U.S. Trade Representative. The company is also getting pressure from the Chinese government to clean up its act.

Before the ramp-up, Alibaba said it had removed more than 380 million product listings and closed about 180,000 small "shops" on the Taobao platform in the 12 months ending in August.

Nevertheless, clever Taobao shoppers who know where and how to look can still find knockoffs on the platform. And shop owners who know how play what analysts are calling a "whack-a-mole" game with Alibaba are still in business.

Taobao's website search system no longer responds to bargain hunters typing in key words such as "shuihuo," which is the Chinese word for "counterfeit," or "gaofang," which means “high-grade copy.”

But trademark-infringing, look-alike phonies can be found by shoppers that know how to burrow beneath the website's surface.

Industry analysts such as Lu Zhenwang, who closely tracks e-commerce as CEO of the consultancy 10000qing.com, said Taobao "has been rather diligent about cracking down on cheap counterfeit versions of big, international brands." But these are "the kind that are most sensitive and easiest to spot."

Now, Lu, said, fakes are still around but simply harder to find. “The waters have become murkier,” he said.

Taobao in recent years had “no choice but to remove the obvious items" that are counterfeit, says Wang Hai, a professional counterfeit detective, a pirated goods hunter who profits by purchasing and reporting fake goods, in order to reap a triple refund from the seller. "But at the end of the day, Alibaba is too lenient toward pirating merchants.”

“In many ways, they are conniving with them, helping them avoid being shut down," he said. "Their anti-fake campaigns are fake.”

A typical counterfeit shopper is 28 year-old Zhang Qiqi, a translator who works in Beijing. She said she wanted to buy a brand-name handbag but refused to pay a high price for something that's quickly outdated.

One day while browsing Taobao for imitation designer bags, Zhang found a shop that had what she was looking for: A blatantly fake designer sling bag called a "Chloe Faye" for only 500 yuan.

A genuine Chloe Faye is usually tagged at more than $1,900 in China.

The knockoff bag's “details were all nearly identical" to those on the genuine product, Zhang said. "Except the Chloe name wasn’t engraved.”

Zhang contacted the Taobao shop owner and learned she could have the Chloe name engraved on the bag for an extra 100 yuan.

Zhang found the knockoff by typing "Chloe Faye bag" and "rank store according to total sales volume" into the Taobao search function. She knew that shops selling the highest number of these designer bags -- and which are by no coincidence also the least expensive on the website -- are usually dealing in counterfeits.

Taobao shoppers can also find fakes by typing into the search system the first letter of a famous brand name, followed by the Chinese word "jia," which means brand. So “B jia” is a shorthand used to find fake Burberry products, “C Jia” steers shoppers to Chanel, Celine or Chloe knockoffs, and "F jia" is for anyone with a thing for Salvatore Ferragamo counterfeits.

Other tricks involve inserting asterisks into brand names to skirt Taobao’s keyword detection system, or including the term “tongkuan,” which means “same type,” along with a brand name.

Shop owners are wary about how they discuss imitation goods issues with potential customers. When approached by Caixin, merchants selling "Hermes" scarves for 250 yuan apiece suggested moving the discussion to WeChat, a messaging app, where they felt they could freely chat about the craftsmanship of their high-grade copies.

During another chat session, a Taobao merchant featuring a handbag nearly identical to a product bearing the Michael Kors identified them as “GF” because he didn't want to type the word "gaofang."

“The quality is top-notch,” the merchant said. “When looking at the details, you can't tell it from the real thing."

As the chat continued, the merchant posted private photos of the bags showing Michael Kors etchings -- photos that are blurred on his Taobao shop page.

"Our bags are made with the exact same patterns as and with leather left over from the originals," he boasted.

After being rebuked by the U.S. government agency as a "notorious market" -- the second time Taobao has been slapped with that label in four years -- Alibaba expressed “disappointment,” noting the company had redoubled efforts to fight brand piracy over the previous year.

The campaign continues. In January, Alibaba sued two merchants who allegedly sold knockoff luxury watches. And in March, it took similar action against a cat-food seller.

Alibaba Chairman Jack Ma recently blamed Chinese authorities for legal loopholes that fail to deter copyright infringement. He suggested treating them like drunk drivers by punishing them with the jail sentences and heavy fines.

“Throwing drunk drivers into jail is one way to solve the problem,” said intellectual property lawyer Ma Ce of the Tengzhi Law firm in Hangzhou. “But enforcing the law by setting up strict sobriety checkpoints is just as important.”

Ma, the lawyer, said he thinks Chinese trademark protection laws are adequate but that Alibaba's effort to root out fakes has been superficial.

Unlike the law's one-strike-you're-out system for dealing with drunk drivers in China, Alibaba uses a point system that gives shop owners a chance to stay in business even after they're caught dealing counterfeits. Only after a so-called "extremely severe" infraction, or having sold pirated goods three times, is a Taobao shop closed.

An “extremely severe” violation, according to the platform’s “counterfeit identification and penalization policy,” occurs when a merchant offers "very large" quantities of counterfeit goods and the police intervene. For example, a merchant convicted of selling multiple knockoffs of international, brand-name goods and earning millions of yuan can get a five-year sentence and a 5 million yuan fine.

For less severe violations, a counterfeiter could be suspended from listing new items on Taobao for 14 days or blocked from shopper searches for a week. And violators who change their ways and stay out of trouble for year can have their Taobao business records wiped clean.

An Alibaba spokesperson conceded company policies aimed at preventing sales of counterfeits on Taobao are not perfect, adding they're regularly reviewed and updated. The policy's latest version, which could be found on the Taobao website, was posted Jan. 20.

Anti-counterfeit campaigns are delicate for Alibaba, the spokesperson said, because the goal is to balance a fight against fakes with keeping the Taobao platform simple enough for the small entrepreneurs who make up the vast majority of the platform's merchants.

Industry experts such as Cao Lei, director of the China E-commerce Association, said fakes could be rooted out if consumers would help by asking shop owners for unique serial numbers so that those without an authentic tag cannot even be placed on sale.

And Alibaba is indeed trying to clear out fakes, Cao said. “We have to give them credit for devoting more resources than ever to stamping out counterfeits,” he said.

But the bottom line, according to industry experts, is that Alibaba's Ma very much sympathizes with the small business owners that dominate Taobao. And these businesses are often linked to small-scale workshops that churn out fakes.

Cao said some of Alibaba's piracy problems date to its early years, when the company was fixated on rapid growth. Today, 80% of company revenues come from providing marketing services to small merchants.

As a result, he said, Alibaba is now paying a price for "neglect and letting the problem deteriorate to this state.”

At a March meeting of China’s legislatures, a tile manufacturing executive who also serves as a legislator bemoaned that Alibaba had failed to properly respond to complaints about unauthorized sales of his company’s floor tiles.

Huang Jianping, CEO of tile maker Marco Polo, had reported the problem to police in the city of Dongguan. But he said Taobao failed to respond to police requests in a timely fashion.

Taobao said it received no complaints from Marco Polo but went ahead and cut more than 1,000 links to counterfeit tile sellers from its platform.

“Fighting counterfeits is difficult," Taobao said in its reply to Huang's charge. "As a manufacturer, it’s also your responsibility to streamline your distribution channels.”

Wang, the detective, was once asked by a Taobao merchant to help him cancel an order for items after he learned they might be fake. The merchant apparently made the request after Taobao employees secretly told him that Wang was an investigator posing a buyer.

Wang thinks fakes could be eradicated if Taobao would limit the number of merchants selling any particular brand.

“If there are 200 merchants selling Nike shoes," he said, "some of them are bound to be pirated."

A search on Taobao turns up more than 100 pages for Coach, Nike, Uniqlo, iPhone, Disney, and other well-known brands.

Top brands are most most often sold on Tmall, Alibaba’s business-to-consumer platform, rather than Taobao. But website searches show most of the products claiming to be genuine, brand-name goods are sold on Taobao through “authentic purchasing agents.”

This story has been updated to show that companies can be kicked off Taobao if they are caught selling pirated goods three times, and that Alibaba's anti-piracy policy was last updated in January.