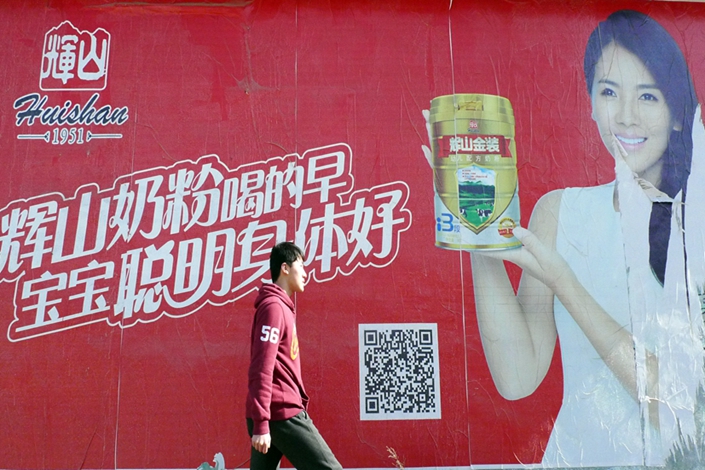 China Huishan Dairy Holdings Co., still reeling from an 85% decline in its stock price on the Hong Kong Stock Exchange on Friday, has acknowledged that a senior executive is missing but denied that the CEO embezzled funds. Photo: IC

(Beijing) — China Huishan Dairy Holdings Co. admitted Tuesday that it had lost contact with a senior executive but denied rumors about embezzlement and forged invoices.

The Hong Kong-listed company’s statement was its first since its shares crashed a record 85% on Friday.

Huishan Dairy’s board of directors has been unable since March 21 to contact Ge Kun, who oversees the company’s treasury and cash operations and maintains relationships with major bankers, the company’s stock exchange statement said. Yang Kai, the company’s chairman, received a letter from Ge saying that recent work stress “had taken a toll on her health,” and so she was taking a leave of absence and did not want to be contacted, according to the statement.

Huishan Dairy, which is one of China’s largest dairy producers, dismissed rumors that Yang had embezzled 3 billion yuan ($437 million) from the company to invest in the real estate market in Shenyang, Liaoning province. Huishan Dairy also denied that it had approved forged invoices, stating that the company “does not believe there to be any misappropriation.”

The drop in the dairy company’s share price came a day after Liaoning provincial government officials convened a meeting with company executives and 23 banking creditors as part of government efforts to maintain financial stability. During the meeting, Yang said that his company had a “broken capital chain,” and he would seek to raise 15 billion yuan within a month to solve the liquidity crisis by selling company stock to new strategic investors, according to bankers who attended the meeting.

The biggest lender was the Liaoning branch of the Bank of China, which approved a 3.3 billion yuan credit line to Huishan, followed by Jilin Jiutai Rural Commercial Bank Corp., with a credit line of 1.8 billion yuan, according to bank creditors. In an income statement released on Monday by Jiutai Bank, the lender said its provision for impairment losses on loans increased to 1.8 billion yuan by the end of 2016, up by 29.2% from 1.4 billion yuan a year ago.

As of Jan. 12, Champ Harvest held 17.88% of the Hong Kong-listed shares in Jiutai Bank, according to a statement released by the Hong Kong Stock Exchange.

In a bid to help the dairy company avoid defaults that may further dampen investor confidence, the Liaoning government promised to buy a plot of land from Huishan for more than 90 million yuan, according to bankers who were present at the meeting. Officials also urged major banks to “make an exception” for Huishan by not downgrading the firm’s credit worthiness or taking it to court to have its assets frozen.

Huishan Dairy said in its Tuesday statement that the Liaoning government had proposed that the company “consider an action plan whereby any overdue interest payments would be remedied within two weeks” and its “liquidity position improved within four weeks.”

Huishan Dairy survived an attack in December by short seller Muddy Waters, which published reports alleging Huishan’s fraudulent and overstated revenue. Huishan denied the allegations. Carson Block, the founder of Muddy Waters, said in an interview with Caixin on Friday that he was happy with the slump in the share price, even though the outcome was unexpected.