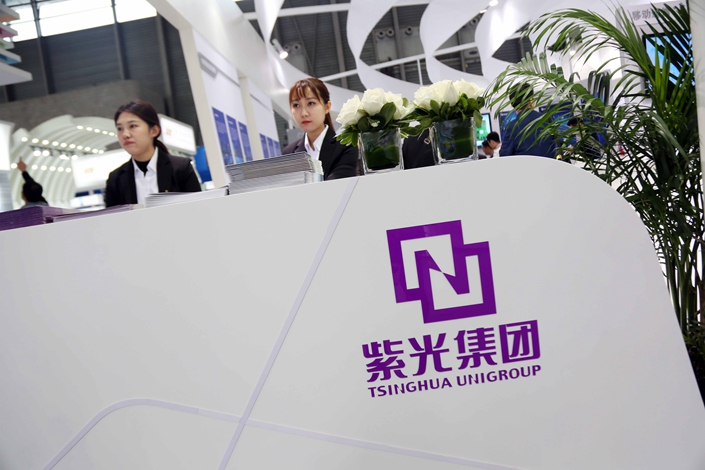 Tsinghua Unigroup has announced it has received a combined 150 billion yuan credit line from China Development Bank and a state-backed fund. Unigroup will use the credit to fund acquisitions and new development. Photo: IC

(Beijing) — Tsinghua Unigroup Ltd. said it has signed agreements with two state-backed financial bodies that give it access to 150 billion yuan ($21.8 billion) for acquisitions and new development.

The deals are crucial to Unigroup’s goal of building a major Chinese microchip company.

Unigroup is the most aggressive among a field of companies with strong state ties that are taking advantage of Beijing’s largesse as Unigroup tries to someday compete with the likes of global giants such as Intel Corp. and Qualcomm Inc.

Despite being the world’s biggest consumer of microchips that power items as diverse as smartphones and microwave ovens, China has to import most of those due to its own relative lack of development and manufacturing capabilities.

China Development Bank will provide 100 billion yuan in new credit for Unigroup, which is closely affiliated with Tsinghua University, China’s leading sciences school, according to an agreement signed on Tuesday. A state-backed fund set up to support development of China’s microchip sector will provide access to another 50 billion yuan, under another agreement.

“The basic framework of the agreement is to support capital-raising,” a Unigroup insider told Caixin. “As to specific agreements, each of those will be subject to separate discussions.”

Unigroup and its sister companies have formed a wide array of alliances with such global names as Intel and Hewlett-Packard Enterprise Co. in pursuit of their chip-making ambitions. But the group has also met with strong resistance in both Asia and the West from governments that are wary of selling some of their most cutting-edge companies to Chinese buyers.

Such concerns torpedoed previous talks by Unigroup and its sister companies to purchase U.S. memory chip giant Micron Technology Inc. and for a major stake in hard-drive maker Western Digital Corp. Such resistance also killed a series of deals by the group to invest in three Taiwanese chip makers.

In the face of such resistance, Unigroup and its sister companies have focused their energies on building up China chip design and manufacturing resources from scratch in their home market. But analysts point out that such a buildup requires lots of cash, which the new credit lines could help to address.

In 2015, company Chairman Zhao Guowei said he planned to invest 300 billion yuan over the next five years to build the world’s third-largest chipmaker. In December the company announced its purchase of control of a domestic chipmaker in Hubei province for 19.7 billion yuan. It is also building a 30 billion yuan memory chip complex in Nanjing.