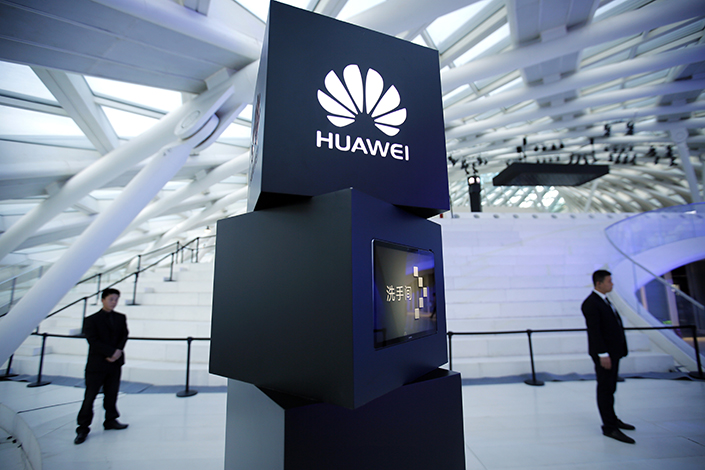 Security personnel stand near a podium at a launch event for the Huawei Mate Book in Beijing. Photo: IC

(Beijing) — Telecommunications giant Huawei Technologies Co. Ltd. said on Friday its profit was virtually unchanged in 2016, its worst performance in the last five years, as its margins came under intense pressure due to competition in its core businesses.

Huawei posted a profit of 37 billion yuan ($5.36 billion) last year, up just 0.4% from 2015, according to a self-released company report. Revenue rose by a much stronger 32% to 522 billion yuan, thanks in part to 44% growth in the company’s younger and fast-growing smartphone unit. But the company’s operating margin dipped to 9.1% amid stiff competition, down sharply from 11.6% in 2015 and the lowest level in the last four years.

In January, Huawei previously announced the 32% revenue growth for the year but declined to give the profit figure at that time. In a New Year’s message, rotating CEO Xu Zhijun said the company should seek sustainable growth and shift to pursuit of quality growth over growth at any cost. He sounded a similar tone in the latest results announcement.

“We can’t cling to what has worked or what we have gained, because past success is not a reliable indicator of the future,” Xu said in a statement with the annual report. “This is a vital fact that we must recognize. Moving forward, we need to hone our skills, step up to the plate, and aim for the stars.”

Huawei is not required to release financial data due to its status as a private company, but it still issues semi-annual reports in an effort to be more transparent.

The company said it still relied on China for nearly half of its sales last year, with revenue for the market rising 41% on strong gains for its core networking equipment and smartphones. Huawei is trying to become more global, and is already one of the world’s top players in its older networking equipment business. It is also aggressively trying to expand its newer smartphone business beyond its home China market.