By Jiang Bowen and Chen Na 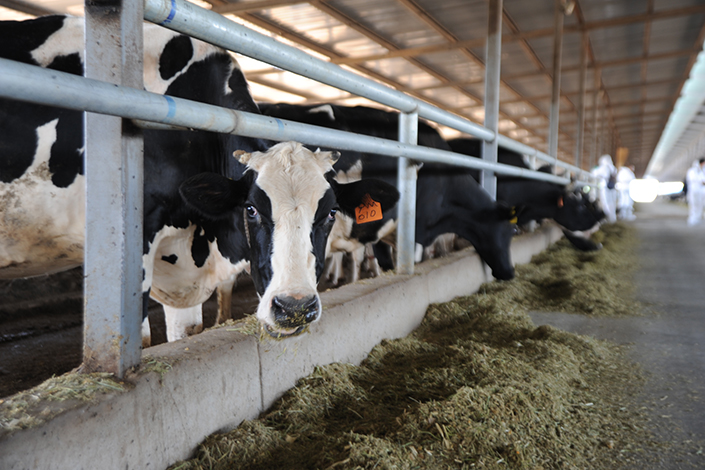 The Pentium ranch is seen in Wuzhong, the Ningxia region, on July 28. China Mengniu Dairy Co.'s CEO said it would not rule out investing in rival China Huishan Dairy, whose shares fell 85% on March 24 on the Hong Kong Stock Exchange. Photo: IC

(Beijing) — A top executive at China’s second-largest dairy said the company has not ruled out investing in rival China Huishan Dairy Holdings Co. Ltd., which has been rocked by financial woes and last week’s near-collapse of its Hong Kong-listed stock.

Questioned Thursday by reporters about Huishan, China Mengniu Dairy Co. Ltd. CEO Lu Minfang said his company to date has had no business contacts with Huishan Dairy. But “as long as the investment is in line with the company’s development strategy, Mengniu would consider investing in suppliers, including Huishan,” he said.

Lu was speaking to reporters and analysts at a Hong Kong news conference tied to the release of his company’s 2016 financial results. Mengniu reported a 751 million yuan ($109 million) net loss last year compared with a 2.4 billion yuan net profit in 2015.

Meanwhile, the Liaoning provincial government has mobilized resources in hopes of rescuing Huishan Dairy, which recently acknowledged that it failed to make scheduled loan payments in March.

News of a potential default sparked a sudden selloff of Huishan shares on March 24. Trading was halted hours after the share price fell 85%, wiping out about $4 billion in its stock value.

Mengniu, which is also listed on the Hong Kong Stock Exchange, saw its stock value climb 5.5% in the week after Huishan shares plummeted.

Huishan’s share crash might have been triggered by leaked details from a closed-door meeting between company executives and Liaoning government officials. Sources told Caixin the meeting was called to discuss the company’s imminent default on loan payments worth a combined 300 million yuan.

Government efforts to rescue Huishan have so far included setting up a creditor commission and urging creditors to neither call in loans nor file lawsuits against the dairy, based in the Liaoning capital of Shenyang. Officials hope their defense paves the way for new Huishan investors, shores up company finances and prevents social instability.

Mengniu, based in the Inner Mongolia region, bought Yashili in 2013.

Lu predicted Mengniu’s earnings would improve this year because the company has been working to improve Yashili’s sales channels.