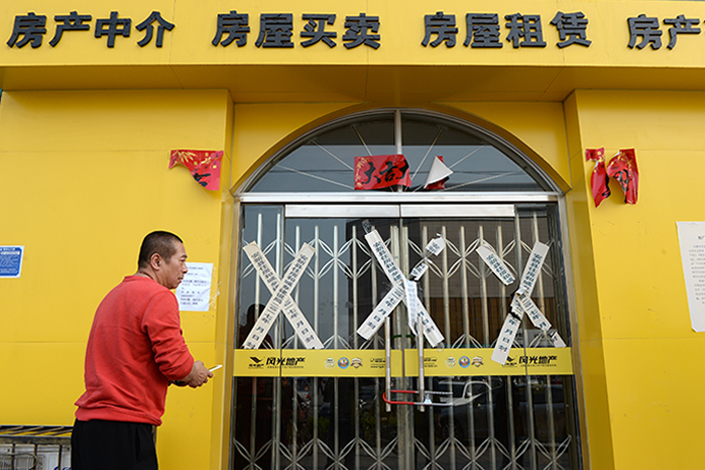 A local man looks at the closed sales center of a real estate project in Anxin county, part of the newly announced Xiongan New Area, in Hebei province, on Sunday. Authorities are cracking down on housing speculation in the three-county area in Hubei that has erupted since the national new area was announced over the weekend. Photo: IC

(Beijing) — A crackdown on frenzied housing speculation is underway in a newly announced economic development zone south of Beijing, with dozens of real-estate agencies being closed and seven suspected speculators being detained.

The crackdown followed the surprise announcement over the weekend of a new economic zone, Xiongan New Area, in Hebei province. The announcement sparked speculators to pile into cars and head to the three counties administered by the Xiongan New Area, where average home prices quickly tripled amid haggling by buyers and sellers.

The crush prompted the committee overseeing the development of the Xiongan New Area to issue a series of orders on Tuesday night to control land supply, homebuying and construction, the official Xinhua News Agency reported.

Meanwhile, local authorities summoned 10 real-estate developers accused of breaking local rules and driving up house prices. As of Tuesday evening, 35 real estate agencies and 71 sales departments of local projects have been shut down, and seven people were detained on suspicion of violating local rules governing property buying, according to Hebei News, a local government news portal.

The Xiongan New Area, which spans three counties of Xiongxian, Rongcheng and Anxin in Hebei, was officially established by central government on April 1.


China has created many special zones with emphasis on different areas to experiment with more free-market-oriented policies and encourage private and foreign investment. These regions were given different names depending on their priorities. The most oft-mentioned ones include “special economic zones,” such as the one in Shenzhen, created in 1980; and “national new areas,” which include Xiongan and the famous Shanghai Pudong New Area, created in 1992.

The committee overseeing the project said it will strictly follow the central government’s doctrine on property markets, which says “houses are for living in, not for speculating with.”

A local housing agent told Caixin on Tuesday that they were told they can’t sell any properties in Xiongxian, also called Xiong county, which is in the new area, after the local government decided to take a hard-line response to speculation.

The average residential property price in Xiongxian shot up from 6,000 yuan ($870) per square meter to more than 20,000 yuan since the project was announced, according to a local housing agency’s sales manager.

The Xiongan New Area oversight committee has also warned investors not to buy properties without officially endorsed ownership, mostly referring to houses built by villagers without acquiring proper land-use rights from the government. The committee emphasized that such transactions will not be protected by law.

The committee said it will continue to crack down on speculation it sees, such as construction projects that began without government approval.