By Wu Xing and Wang Yuqian 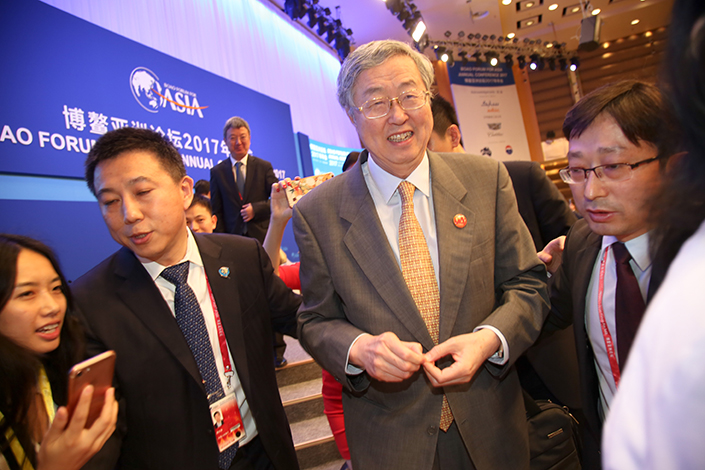 (Beijing) — Zhou Xiaochuan, governor of the People’s Bank of China, said central bankers around the world chose the lesser of two evils — an easy monetary policy — to save the global economy from crashing after the 2008 global financial crisis, even though they knew extremely loose monetary policies would cause serious problems such as asset bubbles.

Now it’s time to shift people’s attention back to fiscal policy combined with structural reform to solve the challenges that monetary policy alone couldn’t handle, he said March 26 at the Boao Forum for Asia, held in Beijing.

Zhou offered his opinion on several issues related to monetary policymaking, China’s economic reform and further opening-up, as well as China’s trade relations with the United States and other countries.

Below is a full transcript of his answers to questions from the forum’s host and a Caixin reporter. It has been edited for clarification.

The U.S. Federal Reserve has begun to raise interest rates. Does this mean that the unconventional monetary policies prevailing over the last 10 years have come to an end?

Zhou Xiaochuan: This is a very challenging question. I agree that after so many years of quantitative easing, monetary policy is no longer as loose as it had been. However, the recovery from the global financial crisis may play out differently from country to country. Each country is working under different conditions, and they may not have very synchronized monetary policies.

In China, we first used quite-accommodating monetary policies to deal with the global financial crisis in September 2008. Then toward the end of 2010, the State Council announced in the Economic Work Congress that we would return to a more prudent monetary policy.

Regarding the global recovery, there is still a sovereign-debt problem in Europe, and other countries are encountering their own problems. Therefore, we are pursuing a very gradual change of monetary policy back to a more prudent level. We know there are challenges for the central banks of many countries, including Japan. But I think everyone has seen the limits (of monetary policy) and started considering how and when to exit quantitative easing.

Second is about inflation. Some countries have seen reflation, but globally I think it’s still too early to say. We have to stay vigilant about inflation. It has a very direct impact on monetary policy-making.

My third point is that, after so many years of quantitative easing, there has been excess liquidity in many countries. Their monetary authorities may have started to tighten the supply, but it’s still a very gradual process. For now, we have to emphasize structural reform and other long-term developments. It’s very important to signal that there should not be an overreliance on monetary policy. This signal is important.

What’s your view about the progress of China’s economic reforms?

That’s a very big topic! I’ll talk about the structural reform then, including long-term goals and priorities in the short and medium term.

For the long term, we have emphasized the goal of stimulating domestic demand. China was very dependent on exports, and we are changing the structures to emphasize consumer and household demand. In recent years, especially at the beginning of the global financial crisis, China has substantially increased investment in infrastructure.

Also, known as “the world’s factory,” we have relied too much on manufacturing. The service sector is relatively weak, so the Chinese government is strongly pushing for faster growth of the service sector, and for a variety of services. Yesterday, Vice Premier Zhang Gaoli said that the service sector’s contribution to the total GDP has gone up from 43% to 50%, so that’s a big change. For the medium and short term, we are focused on cutting overcapacity and inventories, reducing operating cost in the sector, and trying to break production bottlenecks.

Globally, one reason that countries might shift their focus from monetary policy to fiscal policy and structural reforms is that at the beginning of the financial crisis, many countries had a very high public debt-to-GDP ratio. The European Union maintains that public debt should not exceed 60% of GDP, but many European countries had come close to or even broken that limit at that time.

The International Monetary Fund encourages the use of fiscal policy. But of course, different countries have different conditions, so judgments must be made on a case-by-case basis. Japan, for example, already has a high ratio of public debt to GDP, while China’s central-government debt relative to GDP has remained small. But China is a large country and we have more than 30 provinces and regions. It is important to straighten up the central-and-local government relationship. Local governments need to be able to borrow more in order to progress with structural reforms, infrastructure projects, urbanization and development of the service sector. But they also need to be held more accountable for the spending and be subject to a limit on debt. A recent report showed that the fiscal conditions of different local governments varied quite a lot. Some of them have taken on too much debt, and some still have room for more borrowing. I think there is room for more exploration.

This is not to say that monetary policy doesn’t play a role in structural reforms. It’s just that generally, monetary policy is used to address aggregate demand rather than structural problems. But there are some creative tools that could be used to guide capital to specific sectors in ways that support the reform. Take for example the Funding for Lending Scheme launched by the Bank of England. In China, we have adopted similar policies to encourage lending to rural areas and to small and medium-sized enterprises. Assessing the effectiveness of these measures will take some time.

What’s your opinion on the negative consequences of easy monetary policy, which may not have been anticipated?

Regarding the negative effects of easy monetary policies, I’ve participated in a lot of discussions organized by the Bank of International Settlements, the IMF, and so on. These discussions concluded that asset bubbles should not be considered an “unintended” consequence of easy monetary measures. Both theory and experience have showed us that a relaxed monetary policy could lead to higher inflation or cause bubbles in financial markets, in real estate, etc. But a trade-off needs to be made, and currently we must focus on getting the economy to recover from the crisis. So even though the monetary policy may cause negative consequences like this, we had no choice but to implement it anyway. Three years ago, at the G20 summit in Brisbane, Australia, the state leaders set a goal to lift the G20’s GDP by at least an additional 2% (by 2018). This is a trade-off, and the result would have been expected. It’s possible that some politicians and decision-makers may have developed overreliance on monetary policy, and for this very reason, central banks around the world are reminding people that monetary policy is not a panacea, and it causes negative consequences.

Every policy has a different function, so decision-makers should optimize the ways they apply their toolbox to different issues. From a rational point of view, we should implement at the current stage a combination of fiscal policies and structural reform.

Public opinion is also like that. In recent years, investors investing in stock markets, real estate markets or other financial products have also been paying too much attention to monetary policy. This has caused the market to overreact to the monetary policy, and that is to some extent an unintended consequence. But I think that after this period, both decision-makers and the public will develop a more rational approach.

A border adjustment tax (BAT) that is being pushed in the U.S. would affect the yuan’s exchange rate, if implemented. One piece of advice is to open the Chinese market more for foreign direct investment to come in. Are Chinese policymakers and central bank regulators considering any measure to further open up the domestic market, or to compensate for this potential negative impact on the yuan’s exchange rate?

Recently, the whole world has been talking about the U.S.’ proposed border tariff. One opinion goes that the dollar may appreciate by 20% to 25% (because of the proposed tax adjustment). This would affect not only the Chinese currency but also all major currencies around the world.

Whether that will happen or not … well, we’ll see. We have to wait and see if the U.S. would really implement the tax. We don’t know yet. But if such a fast appreciation of the U.S. dollar occurs, I think it would be a global problem. It would also be a very big headache for the U.S. government.

In recent years, we have been making efforts to open up, but the measures we took didn’t target the yuan’s exchange rate. Opening up is very positive for both China and many other countries. The central bank has been involved in the making of opening-up policies, including whether the financial sector could be further opened up. Three years ago, we launched the pilot Shanghai Free Trade Zone. The same arrangement has been expanded to 11 regions in both coastal and inland areas. These free trade zones have policies encouraging trade and investment, including foreign direct investment. These policies share in common two characteristics. One is better market access. We used to have a “positive list” of who was allowed to come in, which we have now changed to a negative list. We are going to substantially cut short the negative list, so it’ll be a short list. The other characteristic is equal national treatment. We’re going to give equal treatment to domestic and foreign investors alike, and ensure that state-owned and private sector get equal access to the market. They should enjoy the same treatment in both pre-entry and post-entry stages.

China is conducting negotiations with the U.S. on a bilateral investment treaty. We’re also engaged in discussions of cooperation with Europe, and in Asia negotiating with other countries on the Regional Comprehensive Economic Partnership. We’re going to open up wider the financial sector, including banking, insurance, investment banking, security and payment systems. While we continue to open up these industries, we’re also very interested in seeing Chinese investors, particularly private investors, being more fairly treated in other countries, for example regarding the acquisition of nonmilitary high technology. I think it’s dependent on the negotiations, and that each side can compromise. That way we can make globalization go forward — everyone can benefit from that. Unfortunately, some negotiations have encountered setbacks. We’re waiting for the new U.S. administration to decide on how to proceed with our previous discussions. Meanwhile, we are still having active talks with the Europeans, Japan, and the member countries of the Association of Southeast Asian Nations. I hope we can reach positive results.

From the perspective of a central banker, could you describe your view about “helicopter money”? (Editor’s note: “Helicopter money” describes an alternative monetary policy of direct payments to consumers when the interest rate can’t be lowered any further.)

Hopefully, we’re not going to depend on helicopter money. I think that after the global financial crisis, many countries are still recovering and need to remedy their fiscal position and repair their national balance sheet by using fiscal policy wisely and pushing forward structural reform. If we can get fiscal policy and structural reform right, there is no need to rely excessively on monetary policy, let alone to use helicopter money.