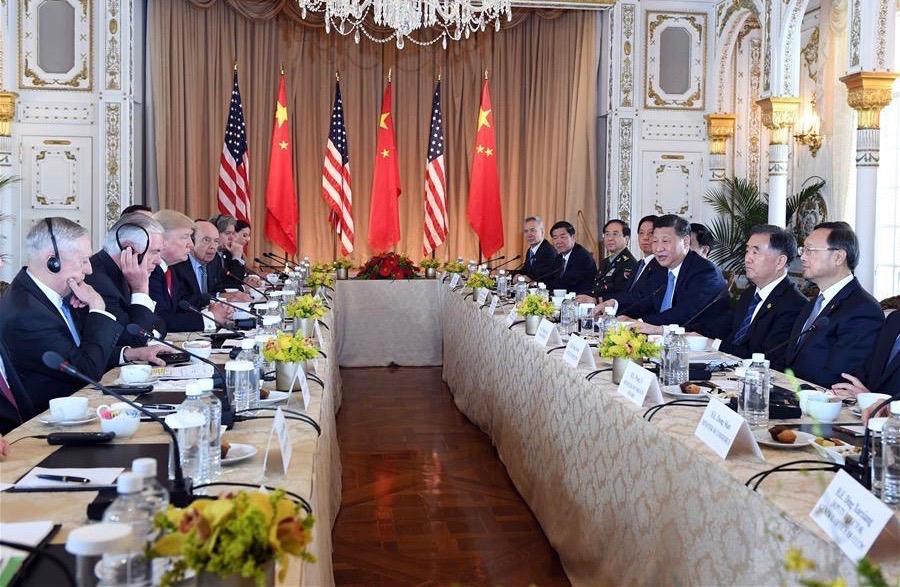 President Xi Jinping and U.S. President Donald Trump have agreed to a new framework for bi-lateral economic and security talks during their two-day meeting in Florida, U.S. despite Trump’s tough talk during his election campaign.

President Xi Jinping and U.S. President Donald Trump have agreed to a new framework for bi-lateral economic and security talks during their two-day meeting in Florida, U.S. despite Trump’s tough talk during his election campaign.

Although the meeting was overshadowed on Friday by U.S. missile strikes to punish the Syrian government for an alleged nerve gas attack on its own civilians, Xi described the meeting as “positive and fruitful,” as the two sides “reached consensus on many issues, and began to develop a good working relationship,” according to a statement from the Chinese foreign ministry.

The two presidents agreed to establish a new high-level framework for negotiations, especially in relation to the economy and security. Other areas of focus include cybersecurity and social and cultural talks, according to the White House.

During his election campaign, Trump had called China a thief of U.S. jobs and a currency manipulator. However, during a press conference after the meeting on Friday, U.S. Secretary of State Rex Tillerson said that the “chemistry” between the two leaders was positive, and the exchanges were “very frank.”

Trump did raise the issue of the impact of China’s industrial, agricultural and technology policies on U.S. businesses and jobs, urging China to “take concrete steps to level the playing field for American workers,” according to Tillerson.

But White House officials did not mention whether Trump raised the currency issue. In response to a media inquiry, Secretary of the Treasury Steven Mnuchin said they would address this issue only after the release of a currency report in the near future.

Concrete progress was made on Sino-U.S. trade relations. The two sides have agreed to start a 100-day plan to discuss trade problems, which is a “sea change” from normal trade discussions that could take years, said U.S. Secretary of Commerce Wilbur Ross.

“I think that's a very important symbolization of the growing rapport between the two countries,” Ross told the media, though he admitted that the 100-day plan might be ambitious given the range of issues and the magnitude.

Trump also reiterated U.S. government concerns over China’s relations with its neighbors over the East and South China Seas, as well as raising the issue of human rights with Xi, Tillerson said.

Reports from the official Xinhua News Agency and the Chinese foreign ministry, however, did not mention human rights or the South China Sea, which the U.S. believes has become a ground for Chinese “militarization.” Instead, the reports said Xi had discussed military exchanges during his meeting with Trump.

Xi proposed that the two sides give full play to military exchange mechanisms such as China-U.S. defense ministry consultations and Asia-Pacific security talks, and make good use of the dialogue mechanism to be established between the two countries' joint staffs of the armed forces, Xinhua reported.

Xi also urged that the two sides implement and improve the mutual reporting mechanism on major military operations and the code of safe conduct on naval and air military encounters, the report said.

The two sides reaffirmed their commitment to a denuclearized Korean Peninsula, but have not reached any agreement on new action plans with regard to North Korea, according to Tillerson.

China has condemned the chemical weapon attack in Syria, but has urged the United Nations to launch an independent investigation before drawing any conclusions, Chinese foreign ministry spokeswoman Hua Chunying said at a regular press conference in Beijing on Friday.

“China’s stance is consistent, we are opposed to the use of chemical weapons by any country, any organization or individuals under any circumstances or purpose,” she said, adding that all sides should try not to worsen the Syrian situation.