JD.com Drone Deliveries Take off With Sichuan Air Base Network 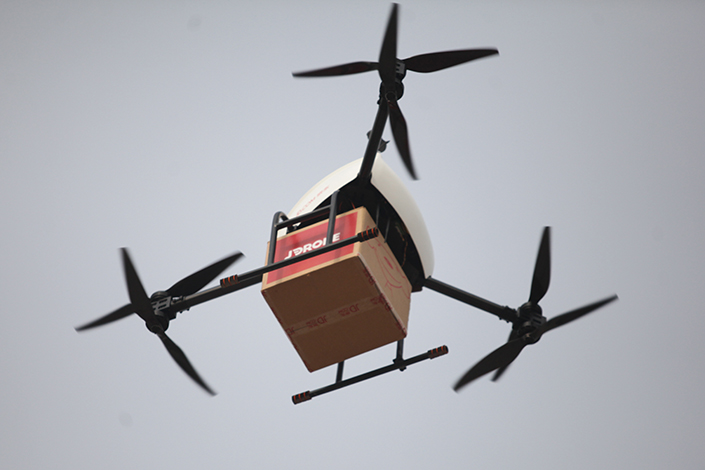 A drone carrying a parcel belonging to online retailer JD.com hovers over Xian, Shaanxi province, during a trial run on Nov.10, 2016. Photo: IC

(Beijing) — Chinese e-commerce giant JD.com said it will build 150 air bases where package-delivering drones can take off and land in southwest China’s Sichuan province, marking a major advance in its development of alternative delivery services.

The bases will be open over three years, and should help to reduce freight delivery costs by 70% in mountainous Sichuan. Use of drones will help local products reach their destinations within 24 hours, and delivery efficiency will improve dramatically in hilly areas, said CEO Richard Liu.

Drones that can transport packages weighing up to 50 kg have already been put into use, and ones with capacity for up to 500 kg are in development and expected to be ready in three years, Liu told Sichuan provincial Party Secretary Wang Dongming at a meeting on Thursday.

Development of the bases is part of a broader collaboration by JD.com and the Sichuan government to develop drone technology. The company, China’s second largest e-commerce firm, has a similar agreement with the government of nearby Shaanxi province.

JD.com has turned to drones in bid to better serve rural market where complex terrain and poor infrastructure often push up delivery expenses and compromise efficiency.

JD.com is the second largest e-commerce company in China after only Alibaba Group Holding Ltd. But unlike Alibaba, which operates online shopping malls populated by thousands of third-party merchants, JD.com sells most of its products directly to consumers. That model gives it more control over logistics involving product movement, allowing it to pour big resources into programs like drone development.

In November, JD.com launched four drone bases, including ones on the outskirts of Beijing, and in Jiangsu, Shaanxi and Sichuan provinces.