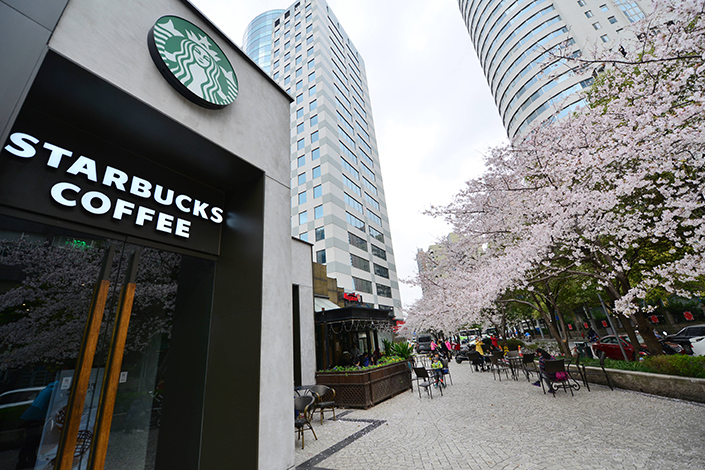 Customers sit outside a Starbucks Coffee Co. cafe in Shanghai on March 22, 2016.The Global coffee giant has announced a plan to give health care benefits to employees’ parents in event of critical illness. Photo: Visual China

(Beijing) – The elderly in China are getting a pick-me-up from the world’s biggest coffee chain, with the announcement that Starbucks will extend health insurance to parents of its employees for critical illness.

Analysts said the move should bring positive publicity to Starbucks Coffee Co., in a country where the elderly traditionally command a high degree of respect. The move also comes as Beijing and local officials plead with younger Chinese to take better care of their parents, many of whom survive on modest pensions and live in distant villages from the big cities where their children work.

Starbucks said its new program will provide insurance for up to 10,000 of its employees’ parents if they become critically ill.

It said the new coverage is designed to supplement China’s national health plan, and is an outgrowth of a broader program the company launched in 2010 to provide financial assistance to its workers. An analysis of data from that program showed that 70% of employees were concerned about the health of their parents as they aged.

China is in the midst of overhauling its health system to provide basic care to all of the nation’s more than 1.3 billion people. Many of those have fallen through the cracks in the country’s transformation from a planned economy, where health care was provided by state-run employers, to a market-based system where such coverage isn’t always guaranteed.

“The active participation by the private sector is critical to China’s efforts to further enhance the social security system to support our aging population,” said Jiang Chongguang, deputy secretary-general of the Insurance Society of China. “Starbucks has responded positively to the government’s call to elevate the commercial health insurance industry, our social security network and to promote a ‘healthy China.’”

Starbucks has been one of the stronger advocates of such corporate social responsibility (CSR) in China, alongside other big multinationals like The Coca-Cola Co. and Apple Inc., said Edward Tse a corporate strategist and CEO of Gao Feng Advisory Co. Programs like the latest one from Starbucks are particularly important in China, where big multinationals can sometimes get criticized for generating big sales in the country without giving back through investment and other social contributions.

“This is a great move by Starbucks in China as it sends a strong signal to its China employees that ‘We care,’” said Tse. “Taking care of the elderly is a core value of the Chinese culture. With the employer taking a proactive initiative to help, it sends the right goodwill message to its staff. This will bode well for Starbucks in China and sets a benchmark for other western companies operating in China.”

Tse added that Starbucks is probably also being motivated by recent calls by Beijing and local governments for young people to do more to support their parents, leading some observers to say that filial piety can’t be legislated.

A law passed in 2013 required children to pay frequent visits and ensure the spiritual and financial needs of parents older than 60. The law also allowed parents to sue their children if they are negligent, but did not specify penalties in cases of guilty children. In cases where parents sue, some judges have ordered children to make specified numbers of visits each month and provide support. But experts have pointed out the law and verdicts from ensuing lawsuits could be difficult to enforce.

Shanghai also made related headlines last year when it said children who violated the law could have their credit ratings reduced.