Ground-Breaking Painting Back in Spotlight With Modern Art Movement Retrospective

By Han Wei and Liu Fang 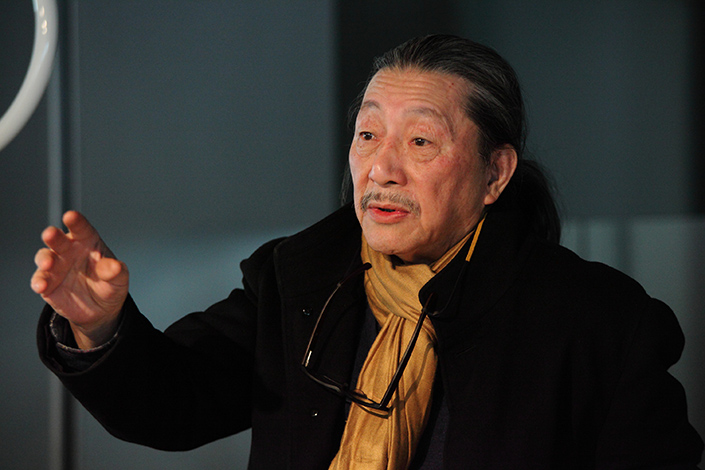 Artist Yuan Yunsheng has been a teacher at the China Central Academy of Fine Arts since 1996. Photo: Caixin

(Beijing) — Travelers rushing through Terminal 1 at Beijing Capital International Airport used to freeze in their tracks when they caught a glimpse of a mural with lush tropical colors, crisp lines and sensuous curves of three naked women washing their long tresses.

Inspired by the traditions of the Dai minority in Yunnan province, Water-Splashing Festival: An Ode to Life, unveiled in 1979, marked the difficult rebirth of the “aesthetic movement” in Chinese art after decades of political turmoil in the 1960s and ’70s, according to critics.

The piece catapulted painter Yuan Yunsheng to the global stage as an avant-garde artist emerging from the ashes of the Cultural Revolution. And interest in the piece was revived in mid-April when the National Museum of China opened an exhibition, Works of Yuan Yunsheng, that looks back at the works of this pioneer in contemporary Chinese art.

Nude figures in artworks were still taboo in China in the late 1970s, although the country was taking its first steps toward opening up to the outside world.

Yuan, 80, said he took the plunge and painted the naked women from an artist’s impulsion to show the beauty of the human form and to test society’s level of tolerance as reform unfolded.

“I was painting a bathing scene, so naturally people would not have any clothes on. But to get it approved by officials, I painted extra lines in my sketch to make it look like the women were wearing clothes,” Yuan said in a 2008 interview with state-run news site China.org. “Then I erased those extra lines before finishing the painting. By the time the authorities found out, it was too late for them to do anything.”

And the ruse worked. During an inspection of the newly opened airport, Deng Xiaoping, the architect of China’s bold reform and opening-up policy, stopped in front of the mural and said in his thick southern accent, “I think it’s good!” according to Fei Zheng, an artist who assisted Yuan with the painting. Yuan donated his first hand-drawn draft of this iconic painting to the National Museum of China last week.

Many saw the painting as a harbinger of changing times and attitudes in China. Influential Hong Kong businessman Fok Ying-tung once told Chinese media that every time he visited Beijing in the early 1980s, he’d go to check that the mural was still in place. “If it was, I would be reassured that China’s reform momentum hadn’t lost steam,” said Fok, who went on to serve on the committee that drafted the Basic Law of the Hong Kong Special Administrative Region before the British handed back its then-colony to China in 1997.

But because of mounting criticism from conservative groups, who considered the painting pornographic and harmful to public morals, the portion with the three naked women was boarded over in 1981. It wasn’t until 1990, when the airport launched a renovation project for its wall paintings, that the Water-Splashing Festival was again exhibited in full. But authorities had already taken the cunning step to lease the space that included the painting to a Chinese restaurant so that it was cut off from public view and served as a lush background only for diners savoring spicy Hunan or Sichuan food.

Several modern Chinese art critics have said this censorship had little to do with the fear of eroding public morals. “The painting contradicted the basic artistic tenets of ‘socialist realism’ prevalent at the time, or ‘the typical reflection of typical figures in a typical environment,’ wrote well-known art critic Lü Peng in History of China Modern Art: 1979-1989. “It was replaced with the personal view and feelings of the artist.”

“The piece transgressed political, artistic and aesthetic conventions of its time,” wrote another prominent critic, Gao Minglu, in his book Total Modernity and the Avant-Garde in Twentieth-Century Chinese Art. “And its tendency towards the abstract got it embroiled in a controversy. … Yuan Yunsheng, the painter, therefore becomes not only the representative of what was known as ‘aestheticism,’ but also a martyr to the pursuit of beauty.”

But Yuan was no stranger to controversy.

Born in 1937 to a literary family in Nantong, Jiangsu province, Yuan was trained in traditional Chinese calligraphy and painting as a child.

In 1955, Yuan was admitted to the China Central Academy of Fine Arts in Beijing, the country’s most prestigious art school, and chose to study oil, which was in vogue due to influence from the Soviet Union.

Chinese art circles regarded oil painting as the most important and popular painting genre at that time for its realistic style, painter Yao Zhonghua said.

Dong Xiwen, a famous painter known for his 1952 masterpiece The Founding of the Nation, quickly took Yuan under his wing.

But the young artist, dissatisfied with the rigid realism of Soviet art, started testing other Western painting techniques like those of the impressionists. “I think among all the oil painting students, Yuan was the only one who had a deep understanding of different Western genres,” said Liu Bingjiang, an art professor at Beijing-based Minzu University and Yuan’s classmate.

Fellow students and friends described Yang as talented, stubborn and “a true maverick,” all good traits in a successful artist — but which made him vulnerable during times of political upheaval.

Art and artists of that era could hardly avoid getting embroiled in politics. In 1957, Yuan and several classmates along with their professor, Dong Xiwen, were labeled as “rightists” during the Anti-Rightist Campaign and sent to a farm in rural Beijing. They were forced to do hard manual labor for years as punishment for what authorities saw as their bourgeois thoughts and way of life.

In a recent interview, Yuan said he has no idea what he did wrong. “Maybe it was because we discussed something about (French painter) Edouard Manet during a casual chat,” he said.

But the punishment didn’t dampen his interest in experimenting with different styles of painting. His moved away from the Soviet realist influence in his work Memories of a Water Town, combining oil painting techniques with motifs from traditional Chinese murals. The work helped him graduate as one of the most promising young painters to ever come out of China’s elite art school, and was applauded by his teachers for its fresh perspective. But it drew the wrath of the establishment with orthodox artists and officials, who criticized Yuan for “indulging in too much self-expression,” and this got his career off to a rocky start.

Yuan was given a job as an arts teacher at a workers’ culture club, which were being set up by the Communist Party to offer recreational classes to factory workers. He spent 16 years teaching factory amateur painters in Changchun, Jilin province, far away from the art hubs of Beijing and Shanghai.

In 1978, Yuan was invited by a friend to illustrate a book about the Dai people in Yunnan. That year, he spent eight months in Xishuangbanna, a tropical prefecture in Yunnan, where he studied the minority Dai culture there. The inspiration for his iconic painting came from the new-year tradition of the Dai people, who splash water on each other for good luck.

A year after his airport mural was boarded up amid controversy in 1981, Yuan went to the United States, where he lived for 14 years as an artist in residence at several universities. Yuan’s six-panel mural Ancient Chinese Tales stands today in the Wessell Library at Tufts University in Massachusetts, and another work, the Human Fable, is on display at the Harvard School of Public Health. He was among the first wave of Chinese artists who had survived the Cultural Revolution to help take Chinese art to the outside world as soon as the country opened up.

During his stay in the U.S., Yuan became a strong proponent of traditional Chinese art, urging young artists dig deeper into their own country’s traditional treasures to find inspiration.

In 1996, Yuan returned to Beijing and started teaching at the China Central Academy of Fine Arts, and he has been working actively to revive traditional art forms. “Chinese art should take its own route rather than following the west!” said Yuan, slim and energetic, in a recent interview with Caixin.

For years, Yuan has taken his students to research and visit cultural relics in over 200 cities and counties in China, guiding them on how to appreciate the delicate religious paintings in the Mogao Caves in Dunhuang or the giant Tang Dynasty sandstone sculptures in Yungang, Shanxi province.

Ancient Chinese depicted their ideals for life and character building into their artworks, Yuan said. “If our students don’t understand sculptures at Yungang and the murals of Dunhuang, how can they develop (Chinese art) and build their confidence?”

“He has been fanatically advocating for a revival of traditions from the Han and Tang dynasties, but that will inevitable contradict with the tastes of modern society, which is chasing after entertainment and utilitarianism,” said Chen Danqing, an art critic and painter known for his collection of Tibetan paintings.

“Yuan’s vision is at odds with the time. He’s like Don Quixote,” Chen said. “But I really appreciate this mismatch.”