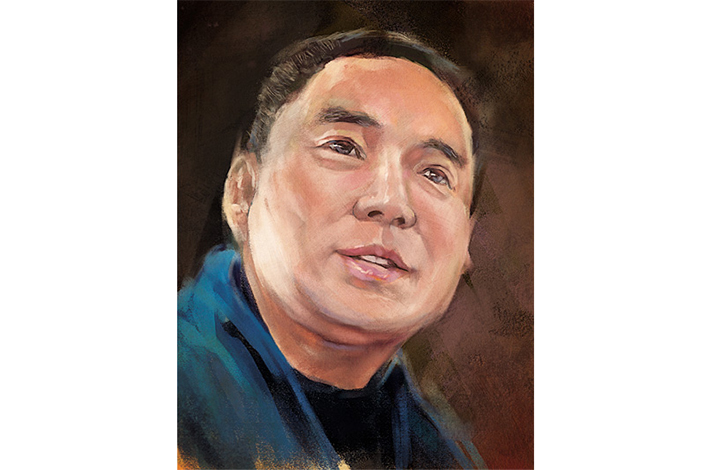 (Beijing) — Guo Wengui, an elusive property tycoon who is behind several controversial business deals and a close ally to a disgraced national security official, is wanted by Interpol.

“We understand that Interpol has already issued a red notice for criminal suspect Guo Wengui,” Lu Kang, a spokesman for China’s foreign ministry, said Wednesday at a regular press briefing, without elaboration.

A "red notice" is a request to locate and provisionally arrest an individual pending extradition. It is not an international arrest warrant, according to the Interpol website.

Fifty-year-old Guo, the controlling shareholder in Beijing Zenith Holdings and Beijing Pangu Investment, was listed by Hurun wealth report as the 74th richest Chinese in 2014 with 15.5 billion yuan ($2.3 billion) in personal assets.

As a close associate of Ma Jian, the former vice minister of the Ministry of State Security, Guo has been living overseas since 2014, while Ma is under investigation since being detained in January 2015 by the Central Commission for Discipline Inspection, the Communist Party's graft buster.

Media reports said Ma and Guo colluded for business interests in various deals, including bringing down the former deputy mayor of Beijing, Liu Zhihua, with a sex scandal that cleared the way for Guo to control a key land project near the Olympic Green park in northern Beijing.

A 25-minutes video footage surfaced online on Wednesday showing Ma confessing to using his position and power to benefit Guo’s business and taking over 60 million yuan bribes paid by Guo. It is not clear when the video was recorded, in which Ma was wearing a light puffer jacket. Ma’s case was handed over to prosecutors in February.

Guo also has close ties to Zhang Yue, who was the head of the Political and Legal Affairs Committee in northeast province Hebei when the graft watch began a probe of him last April. Zhang went on trial on Thursday at the intermediate court of Changzhou city, Jiangsu Province for allegedly taking bribes worth 158 million yuan.

Investigations revealed that Guo, Ma and Zhang formed a close alliance, using security and legal power to meddle in business deals. A source close to the matter told Caixin that Zhang introduced Ma to Guo around 2006, the year Ma was promoted as the deputy national security chief.

One of the most controversial deals of Guo with Ma and Zhang at his back is Zenith's acquisition of Beijing-based Minzu Securities Co. Guo started buying Minzu in 2009 when he paid 291 million yuan for 6.81% of the company from Shijiazhuang Commercial Bank.

During the state-backed bank’s sale of the securities shares, Zhang, who controlled Hebei’s political and legal affairs commission at that time and is also an old acquaintance to Ma, intervened to help Zenith secure the deal, according to a source close to the investigation of Zhang.

To get control of Minzu, Guo intended to take over the 61.25% stake from Capital Airports Holding Co. (CAH), an airport operator controlled by the Civil Aviation Administration of China (CAAC).

Ma said in the video that Guo’s offer was rejected by Li Jiaxiang, then director of the Civil Aviation Administration of China, who preferred to sell the brokerage’s stake to a financial institution, rather than property developer Zenith. Under Guo’s request, Ma held meetings with Li, pressing him to accept Guo’s offer on national security grounds.

Li eventually changed his mind under pressure, said a source from State Development & Investment Corp., which also bid for Minzu’s share. In January 2011, Capital Airports Holding Co. auctioned off the stake at the low price of 1.6 billion yuan, but with strict requirements on the buyer. Zenith was the only bidder.

Another source in the securities industry close to Minzu said that during the Capital Airports Holding share sale and in the following transactions, officials from the security ministry met with Minzu's major shareholders.

"They were friendly, gave their identities and said Guo's company was their partner," the source said. "They hoped we could offer some favors and lower prices."

In the following years, Zenith raised its stake in Minzu to over 80% with total spending of 1.89 billion yuan. As of June 2010, Minzu had 1.78 billion yuan worth net assets on its book. The company was valued by the Beijing Equity Exchange at 2.5 billion yuan.

In September 2015, the China Securities Regulatory Commission launched an investigation on Minzu on suspicion that 2.05 billion yuan of the brokerage’s client deposit funds had been embezzled. Sources close to the investigation said Guo ordered Minzu’s executives to transfer the funds as interbank deposits to Shandong-based Hengfeng Bank and then send to companies controlled by Guo as trust loans via a trust firm in Sichuan. As of end 2016, 300 million yuan of the funds was recouped by investigators.

During Guo's acquisition of Minzu, his former business partner, Qu Long reported to the Central Commission for Discipline Inspection that Guo partnered with Ma and Zhang to use the power of the state security department to intervene in the deals.

In a report to the Central Commission for Discipline Inspection viewed by Caixin, Qu said “between 2009 and 2011, several national securities departments have signed official letters to the CAAC and CAH, requesting them to sell Minzu stakes to Guo at a low price and asking Beijing’s state-owned asset administration and the Beijing Equity Exchange to support the deal for national security. Ma personally intervened to make sure Zenith was the only bidder.”

Qu is the former president of Guangzhou-based Grandrank Investment & Co. and a long-time business partner of Guo. However, their relationship turned sour due to business-interest conflicts.

In March 2011, shortly after the report, Qu was detained in Beijing by police from neighboring Hebei province, on suspicion of "illegally holding guns." Qu's family said he was taken away by more than 10 people, including a mid-level official from the Ministry of State Security and several of Guo’s employees.

A month later, a Hebei court sentenced Qu to 15 years in prison for embezzlement of 855 million yuan, court document shows.

During his detention, Qu wrote in a report that after he told the Central Commission for Discipline Inspection about Guo, "Guo called me and told me he knew all about my report. He threatened me: 'You dare to report me, count your days.'"

Ma, in the video, said that he asked Zhang, who oversaw Hebei’s legal affairs, to investigate Qu to clear way for Guo’s deal. Ma said he had also issued several notices to Hebei officials to push investigations into Qu, citing national security concerns.

Qu’s wife told Caixin that the Supreme Court has started a review of Qu’s case.

Ma said he ordered security departments to censor reports and posts online to delete all contents negative to Guo. Ma also sent officials to threaten a reporter and a newspaper for publishing several reports criticizing Guo.

Ma said his clout within the country's domestic security apparatus also helped Guo shirk hundreds of millions of yuan in fines for violating local construction rules in Beijing in 2008 to secure a land plot in northern Beijing close to the Olympics venues, where Guo’s Pangu Plaza complex was later erected as the capital’s landmark.

Ma was well paid for his favors, he said. In the video, he said Guo paid him more than 60 million yuan worth of bribes between 2008 and 2014, including two properties in Hong Kong, more than 3 million yuan in cash and other gifts.

According to Ma, Guo lent money to Ma and his relatives to buy six apartments and 10 offices from Guo’s property projects, and then bought them back, leaving 20 million yuan in net gains for Ma’s family.

Guo knew of Ma’s interest in collecting artwork, so he frequently brought him back gifts from abroad. He also paid for Ma’s house renovation, family trips and Ma’s daughter’s rent in the U.S.

Regarding Zhang, it is unclear how much in bribes investigators believe Guo paid to him. But he was apparently very confident about the connection. “Zhang will do whatever (we) ask” in Hebei, a source familiar to Guo told Caixin.