China’s Economy Bursts Out of the Gate — but Will It Last? 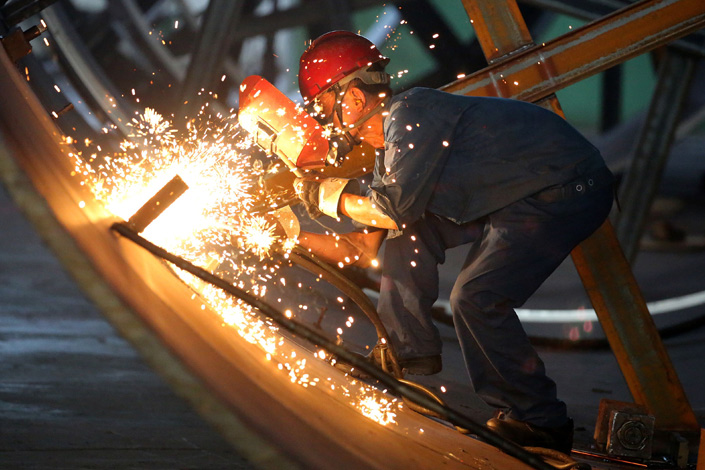 Ning Jizhe, vice chairman of the National Development and Reform Commission, said earlier this month he believes China's economy will continue to be better off as positive factors will keep supporting growth. Above, a worker welds steel at a Pengfei Group plant in Haian, Jiangsu province, on Aug. 23. Photo: IC

(Beijing) — China’s economy started with a bang in the first quarter, with gross domestic product growth picking up to 6.9% and major economic indicators posting across-the-board improvements. But how long can it last?

The growth rate, which beat the median estimate of 6.8% in a Caixin survey of 10 economists, restores China’s expansion to the same pace as the third quarter of 2015. It also got the economy off to a good start to exceed the government’s full-year target of around 6.5%.

Meanwhile, statistics of fixed-asset investment, exports, industrial growth, domestic consumption and household income all showed improvement during the first three months. And data from the General Administration of Customs showed that China’s export in U.S. dollar terms grew 16.4% from the same time last month, coming back from a 1.3% decline in February. For the whole quarter, exports increased 8.2% year-on-year.

But other analysts express more caution due to uncertainties in exports, market demands and other aspects. “The current economic performance is better than expected. While the production side has continued stabilizing and reviving, domestic demands are still weak,” said Zhu Baoliang, director of the economic forecast department at the State Information Center, an agency under the National Development and Reform Commission (NDRC). Zhu expected GDP growth to slow down slightly in the next few quarters.

Zhong Zhengsheng, director of macroeconomic analysis at CEBM Group, a subsidiary of Caixin Insight Group, also cautioned that it is too early to claim that China’s economy has seen a solid recovery, as the first-quarter rebound was largely driven by government-backed infrastructure investments and the white-hot property market.

Ning Jizhe, vice chairman of the NDRC, China’s top economic planning agency, said in an exclusive interview with Caixin earlier this month that he believes the economy will continue to be better off as positive factors will keep supporting growth. But Ning said China needs to further promote private business, encourage foreign investment and push forward structural reform to consolidate the foundation of the economic recovery.

Ning, who is also the head of the National Statistics Bureau, joined the NDRC in 2015. Previously, he worked 12 years in the Research Office of the State Council.

Caixin: The first-quarter GDP growth of 6.9% exceeded many economists’ expectations. What is your view on China’s prospects?

Ning Jizhe: China’s economy in the first quarter can be described as a good start and better than expected. The 6.9% GDP growth is a medium-high level of growth and outpaced many other major economies.

But economic prospect can’t be simply judged by the GDP growth rate. There are other indicators to look at, such as employment, price, balance of payments and residents’ income. China’s market prices have remained stable, as core inflation, which excludes food and energy, has maintained 1.5% to 2% growth since the second half last year, lower than the government’s annual target of 3%. During the first quarter, 3.34 million new jobs were added in urban areas, with the registered unemployment rate dropping below 5%. In term of balance of payment, China’s foreign exchange reserve has remained above $3 trillion for two consecutive months, and the yuan’s exchange rate against the U.S. dollar has been stable. Urban residents’ income grew slightly faster than GDP at 7% for the first quarter. All these indicators show that the economy is stabilizing and becoming better off.

What factors do you think are the main drivers of China’s recent economic revival? Are they structural or cyclical factors? And will the revival last long?

China’s economy is facing complicated issues. From a long-term perspective, the economy mainly faces structural problems. In the first quarter, accelerating industrial growth was an important driver of economic growth. Domestic consumption contributed the most — 77.2% of the GDP growth — while net exports contributed 4.2%.

The government’s structural reform efforts have promoted the economy to gradually shift its reliance on export and investment to domestic consumption. And measures to slash overcapacity and unsold inventory and to reduce excess financial leverage and rein in business costs have shown the effect of improving the market environment. Both internal and external factors have contributed to the economic revival.

Private investment is still in recovery after it dropped to a historical low in August. The State Council last year set up a special team to study private investments and issued several key documents to enhance protection on property rights, which have boosted confidence of private investors.

But the most important reason is the improving market condition. Since the fourth quarter last year, China and the world economy have been improving, featured by increasing investment return in some sectors. Market confidence is restoring with the steady economic growth.

Better credit environment that made it easier for private business to obtain loans is another reason for the investment revival in the first quarter. What’s needed is to further improve financing access for private investors, especially for small and micro businesses.

Foreign Direct Investment (FDI) has grown at a slower pace in recent years, and some foreign companies have decided to withdraw from China. How do you see China’s changing attractiveness to foreign investors?

There are cases of foreign company withdrawal from China in last several years, but it is not a major trend. Multinationals have to consider advantages of different destinations when investing globally. As China’s economy undergoes transformation, its advantages have been shifting. For instance, while labor costs are rising, China now has much better infrastructure. China’s competitiveness is no longer the cheap labor force. Instead, it has the availability of supporting facilities and industrial coordination.

Some foreign investors have left China, but there are also newcomers, leading to a change of China’s FDI structure. Labor-intensive manufacturing is declining while foreign-funded service business is rising.

Chinese companies have accelerated overseas investments, sometimes in risky or irregular projects. How will authorities better regulate companies’ investments aboard?

The government also steps up scrutiny overseas deals to crack down on fraudulent outbound investments, which are aimed at transferring capital overseas.

The broad measure of the money supply, M2, rose 10.6% by the end of March, lower than the project annual growth of 12%. The slower money supply growth, along with the tightening supervision on financial market, has triggered concerns that credit supply may be tightened and the real economy may be hurt. What is your take on this?

Although the M2 grew slower than the annual target, it is still in the normal range. And the total amount of money supply is huge. M2 is not the only measurement to observe liquidity. Other measurements such as Total Social Financing and the narrower M1 have both kept rising quickly. And new-loan issuance is also huge.

China has adopted a prudent and neutral monetary policy stance with aims to reduce financial leverage. But how far deleveraging will go depends on the actual situation. Currently, the policy focus is to reduce individual companies’ leverage ratio to improve the overall condition.

The central bank will carefully adjust monetary policies according to the liquidity changes.

The producer price index (PPI) growth has continued to pick up since September last year and reached 7.8% in February, the highest in eight years. How do you see its future trend, and are there concerns about inflation?

The year-on-year growth of PPI has slowed slightly in March from the peak in February. I think it will continue slowing in the next several months.

In general, production material and industrial production sectors are still the buyer’s market. The recent rise of PPI is a result of reviving commodity prices, unfolding structural reforms that improving market conditions and the low basis of last year’s figure.

Most countries are just recovering from deflation, and there is no sufficient condition for significant price rises. The international oil price stabilized at around $50 per barrel after OPEC cut production. As major economies continue recovery and energy demands revive, oil price may see more fluctuations in the future.

The target and principal of current property market control is to make the market return to its basic objective to meet people’s demand for livelihood, rather than speculation. But there are big gaps between the development of Chinese cities, as population and resources have concentrated in several big cities, pushing up local housing prices. Meanwhile, many smaller cities are suffering high housing inventories. Therefore, property market control must be carried out according to local conditions.

Long-term policy arrangements should be worked out quickly to promote the healthy development of the property market and make homes more affordable to the public. Policies should be designed not only to control speculative demand, but also to increase and diversify supplies in the housing market.