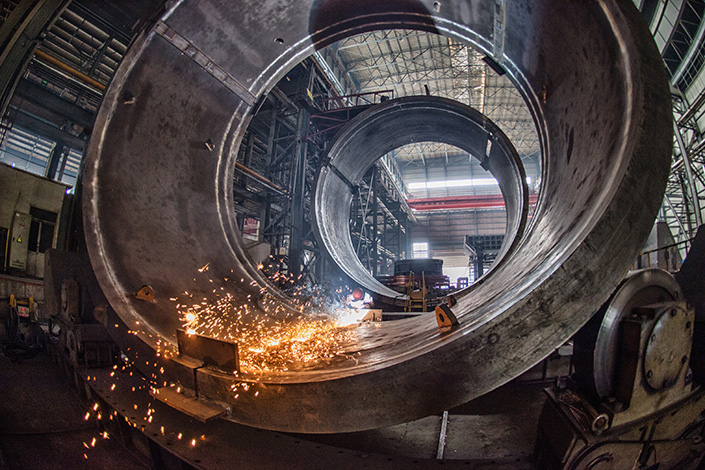 (Beijing) — Growth in China’s manufacturing activity decelerated to its slowest rate in seven months in April, an industry survey sponsored by Caixin showed Tuesday, in a sign of emerging weakness in the world’s second-largest economy.

The Caixin China General Manufacturing Purchasing Managers’ Index (PMI) — closely watched by investors as one of the first available indicators every month of the strength of the Chinese economy — came in at 50.3 last month.

It was down from 51.2 in March and marked the weakest reading since September’s 50.1.

The survey, compiled by information and data analytics provider IHS Markit, is based on figures collected from more than 500 manufacturing companies across the country. A reading above 50 indicates expansion, while a number below 50 points to contraction.

The April reading bodes ill for overall economic growth, which gained momentum in the previous two quarters. Some analysts have expected economic growth to lose steam in the coming months.

“The downward pressure on manufacturing gradually emerged in April,” said Zhong Zhengsheng, director of Macroeconomic Analysis at CEBM Group, a subsidiary of Caixin Insight Group, in a statement releasing the manufacturing PMI figures. “The Chinese economy may be starting to embrace a downward trend in the near term as prices of industrial products decline and active restocking comes to an end.”

The official PMI for the manufacturing sector, released by the National Bureau of Statistics (NBS) on Sunday, was 51.2 in April, down from 51.8 in March due to corrections in commodity prices and slower expansion in new orders and output. The April reading was the weakest in six months, NBS data showed.

Prices of commodities such as steel, coal, and midstream products such as chemical fiber all saw “a notable correction” in April, partially driven by the ongoing financial deleveraging that strained interbank liquidity, they said in a report on Sunday.

Government efforts toward deleveraging have stepped up since March. President Xi Jinping last week renewed a pledge to safeguard financial stability and prevent systemic risks, as authorities are worried about the country’s mounting debt levels and hazards buried in its opaque and increasingly complicated financial system. Total borrowing by the government, companies and consumers in China rose to about 260% of gross domestic product at the end of 2016, up from 250% a year earlier, according to research firm Oxford Economics.

The Caixin survey showed that increases in output and total new business both hit their lowest levels since September, with new export orders rising at their weakest pace since December. Some companies blamed the softer rise in new work on relatively muted customer demand.

Stocks of purchased goods expanded after falling into contraction territory in March, but the improvement was marginal, suggesting that companies were still rather inactive in restocking, likely due to caution over the business outlook.

The rate of payroll cuts picked up to their fastest in three months in April, as companies continued to shed jobs or delayed replacement of those who left their jobs voluntarily.

The rise in input costs eased to a seven-month low, and firms slowed output price increases to their weakest pace since August.

China’s year-on-year economic growth accelerated to 6.9% in the first three months of the year on the heels of higher investment, recovered exports and a continued real-estate boom, official data released last month showed. The strengthening followed an increase of 6.8% in the last quarter of 2016 that was the first pickup in two years.

But analysts have warned that the recovery may prove short-lived partly as the effects of measures to cool the real estate market kick in, while the government is expected to tighten monetary policies to rein in debt, especially financial leverage.

Some also voiced concerns that the rebound in manufacturing and private investments, supported by increased profits in upstream industries driven by commodity price rises, may lose traction given that charges on some key raw materials, such crude oil, have started to fall more recently.

A number of economists have predicted overall growth to start slowing as early as from the current quarter. For example, investment bank Nomura has forecast the pace of expansion to moderate to 6.8% in the April-to-June period and continue to weaken to 6.6% in each of the last two quarters of the year.

“We see downside pressures looming and maintain our call for a shallow slowdown through the course of this year,” Nomura economists said in a note on Sunday after the release of the official manufacturing PMI for March.