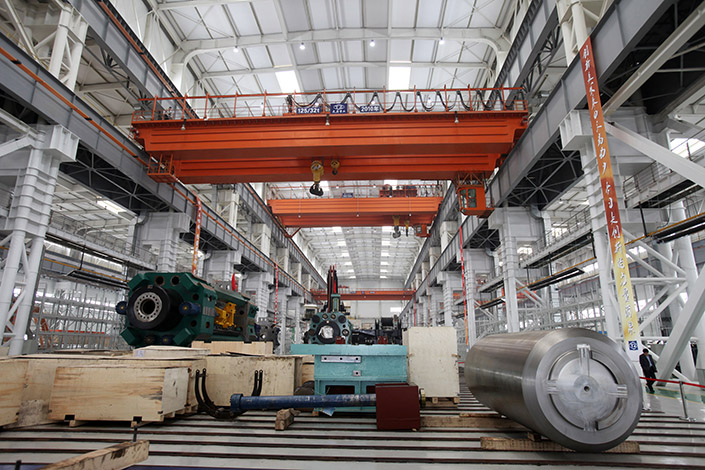 An employee walks past heavy equipment in a research and development center in Tianjin Binhai New Area, on April 27, 2012. Tianjin plans to allow employees to buy shares of state-owned enterprises. Photo: Visual China

(Beijing) — The northern port city of Tianjin has become the latest municipal government to unveil plans to allow employees to buy shares of state-owned enterprises (SOEs), as China moves to deepen reforms and breathe new life into the inefficient state sector.

The State-Owned Assets Supervision and Administration Commission of Tianjin said it will select five to 10 of its SOEs to start the trial program, the agency said in a statement. Volunteer companies have until May 15 to submit their applications.

Tianjin’s step is part of a broad initiative by the Chinese government to encourage private investment in the state sector — known as mixed-ownership reform — as it seeks to improve the efficiency and competitiveness of lumbering SOEs. The thinking is that such ownership will boost the morale of workers and encourage them to work harder by linking their own interests more closely with the company’s fortunes.

The central government has labeled the push for mixed ownership “an important breakthrough point” for SOE reform in 2017, and vowed to make progress in state-monopolized industries such as energy, telecommunications and transportation.

So far, more than 20 provincial-level governments have pledged to conduct pilot programs to sell SOE stakes to employees, the official Securities Daily reported on Wednesday. They include Beijing, Shanghai, Guangdong in the south, Shandong in east China and the southwestern megacity of Chongqing.

Under Tianjin’s plan, researchers, managers and other employees in “key posts” that have “direct or significant influence on their company’s operation and sustainable development” will be allowed to hold a maximum of 30% of the SOE’s total equity, according to the statement released by the city’s state-owned asset watchdog on Tuesday. A single worker will be allowed to own up to 1% of the SOE’s equity.

However, the state must remain the largest shareholder after the reform, with its stakes kept above 34% of the total equity of the company, the city government said.

The SOEs will be allowed to sell stakes to its workers through private share placement or by setting up new joint ventures. The shares would be managed by a specialized organization elected by a general meeting of the investors, it added.

If an employee resigns, retires, is terminated or dies, the shares must be transferred to other internal investors within 12 months. The transaction can be done at negotiated prices if the buyer is a private investor. The price will be capped at a level equivalent to the audited net asset value per share in the last year if the stakes are sold to the state investor, according to the statement.

The Tianjin government will prioritize research institutes, hi-tech companies and science and technology service firms for the pilot program.

This isn’t the first time China has tested share ownership of SOEs by their employees. In the 1980s, some SOEs introduced employee shareholding plans. But later such arrangements were called off due to corruption concerns. For example, some government officials and SOE senior managers misused the program to get valuable shares at deep discounts, the state-run Xinhua News Agency said previously.

Some analysts have warned the new programs also carry potential risks. For instance, management could attempt to take control of SOEs because they are in an advantageous position to take employees’ stakes.

The Tianjin plan sets restrictions, including a ban on SOE leaders appointed by local authorities from taking part in the employee shareholding project. Companies are also prohibited from granting shares to employees for free.

Shares of staff investors will be locked for 36 months after the company is floated on the stock market. After that, directors and senior managers can shed no more than 25% of their stakes each year, the statement said.

The government of Beijing has picked six SOEs, including the new-energy vehicle unit of automaker BAIC Motor Corp. Ltd., fast-food chain Qing-Feng Steamed Dumpling Shop, and technology firm Zhengda Kunshun, to carry out the program in the city, Xinhua reported in March.