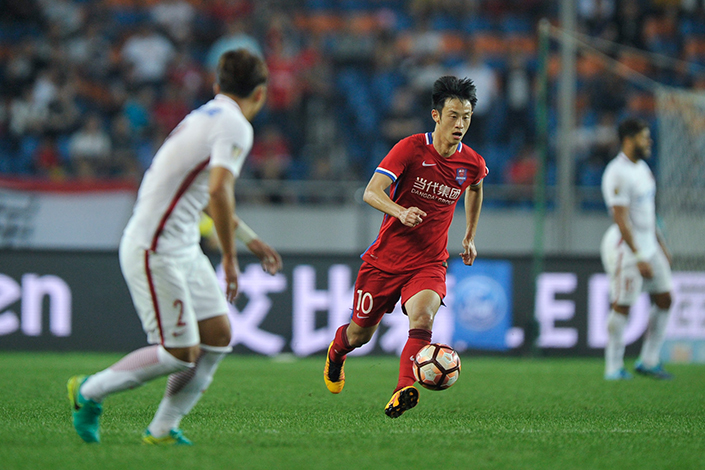 LeSports acquired two years’ worth of rights to online broadcasting of Chinese Super League soccer matches for 2.7 billion yuan in February 2016, but sold the rights 13 months later as the financial woes of corporate parent LeEco took their toll on the online sports broadcaster. Above, Chongqing Dangdai Lifan and Shanghai SIPG play to a 1-1 tie in Chinese Super League play in Chongqing, China, on April 30. Photo: IC

A little more than a year ago, the online sports broadcaster LeSports was busy pursuing a grand vision embodied in a grand marketing slogan: “No Chinese Super League without LeSports.”

LeSports, a subsidiary of the Chinese tech conglomerate LeEco, appeared well on its way to becoming one of the country’s dominant broadcasters of major sporting events.

LeSports had spent the previous two years buying broadcasting rights for a smorgasbord of 310 domestic and international sporting events, including European soccer matches and North American basketball games, in hopes China’s hundreds of millions of armchair athletics fans would “turn to LeSports whenever they wanted to watch any sports,” a former company employee told Caixin.

The company saw huge profit potential. Online platforms including LeSports attracted about 40 percent of the 470 million viewers who watched broadcasts of Super League matches in 2016, according to an industry report by the consultancy Deloitte. Other viewers watched games on TV.

Rights to Super League games as well as three deals, worth more than $256 million combined, for English Premier League matches helped drive LeSports’ subscription sales. Indeed, the company amassed about 3 million paying customers between its launch in March 2014 and June 2016.

LeSports planned to boost its subscriber base to 5 million by early 2017 — a subscription total that company CEO Lei Zhenjian said in 2016 would generate enough revenue to cover the company’s broadcasting-rights investments. LeEco CEO Jia Yueting predicted Super League events would net the company advertising revenue worth nearly 500 million yuan in the first year.

The plan appeared to be on track until late 2016, when LeEco’s finances started turning sour.

Reports that LeEco was unable to repay loans emerged in November, and Jia acknowledged in an internal email that a money crunch had forced the company to scale down an ambitious expansion plan. Some investors started bailing out, and the company’s Shenzhen-listed share prices fell nearly 14% that month.

LeEco avoided a crash in part by tapping LeSports’ bank account, a source close to LeSports’ management told Caixin. “LeSports had raised 8 billion yuan,” he said. “Four billion was taken away by LeEco.”

But the parent’s financial woes spread to LeSports. At the end of 2016, for example, fees for more than half of its acquired broadcast rights had not been paid, a LeSports staffer told Caixin. Some overdue fees dated to 2014.

As the grand vision began to fade, LeSports announced a major restructuring in December that included laying off 10% of its employees. Media reports pegged the company’s pre-layoff workforce at around 1,000.

Without specifying a reason, an AFC statement at the time said the league had “no alternative but to terminate the contract.”

Although LeEco’s financial woes contributed to the scaleback at LeSports, the subsidiary has at times stumbled on its own, too.

For example, the broadcast rights agreement for Super League games was fraught with miscalculations.

What was described as an “exclusive” right to livestream every Super League match for two seasons apparently was not what it seemed. Information including business contracts obtained by Caixin showed that Tiao Power, an event broadcasting services company that sold the rights to LeSports, also signed limited broadcast contracts with online video platforms PPTV and Baofeng Sports, as well as the state-run television giant CCTV and regional stations such as Gansu TV.

When asked whether LeSports executives knew before signing the contract that other online companies would be able to broadcast Super League games, Tiao General Manager Zhao Jun said the two sides had discussed the possibility. There was “a consensus during the negotiations (that) a few other media companies could buy some broadcasting rights,” he told Caixin.

Apparently, LeSports executives also knew that matches would be broadcast on TV, which in fact is the most popular viewing format among Super League fans.

Fans prefer TV rather than online platforms because China’s soccer matches are generally played when they’re at home in the evening and on the weekend, according to Wang Zheng, a Communications University of China associate professor.

The company reported 2.4 billion yuan in revenues and 6 billion yuan in operating expenses for 2016, with most of its spending going toward fees for broadcast rights, said Liu Jianhong, one of the company’s presidents.

Other miscalculations revolved around the company’s subscriber-base expectations, as some consumers found ways to access the LeSports platform without paying for it. The company charged 59 yuan a month for basic access, 159 for one sports season, and 590 yuan per year.

A substantial number of people watching games on LeSports received free subscriptions that were offered as consumer perks, a company staffer told Caixin.

And premium subscriptions are apparently worth far less than LeSports charges. “You can tell the market value of VIP memberships by looking at online secondhand markets” for membership passwords, the staffer said. On the e-commerce site Taobao, for example, “a single password sells for 80 yuan to 120 yuan.”

LeSports executives apparently overlooked the fact that Chinese sports fans are not big spenders. The average Chinese consumer spent only about $27 all year on sports-related items in 2015, or less than 13% of average global spending, according to an industry report by the brokerage GF Securities.

LeSports executives may have been waking up to their misreads of subscriber revenue potential when they launched an investment drive that raised 8 billion yuan from individual investors and venture capital firms in April 2016. But just a few months later, the company had to funnel money to prop up LeEco and other subsidiaries, LeSports sources told Caixin.

Since the restructuring began late last year, a LeSports staffer told Caixin, the company has stabilized.

“We can’t say that the hard times are over,” he said. “But we’re no longer on tenterhooks like we were around Chinese New Year” in early February.

And LeSports is trying to widen its subscription options, according to a recent company announcement. “We plan to introduce a ‘competition package,’ a ‘team package,’ and other, more specific, membership products,” it said.

The company is also finding it easier to sell advertising tied to the smaller sporting events still on its broadcast agenda, a person close to LeSports management told Caixin.

Huang Jianxiang, a national TV sports commentator, thinks LeSports had no choice but to modify its grand vision since “no business gets every decision right.”

“Anyone who suddenly becomes popular has days when they feel like they’re floating above the clouds,” Huang said. “The sooner they come down from that, the better.”