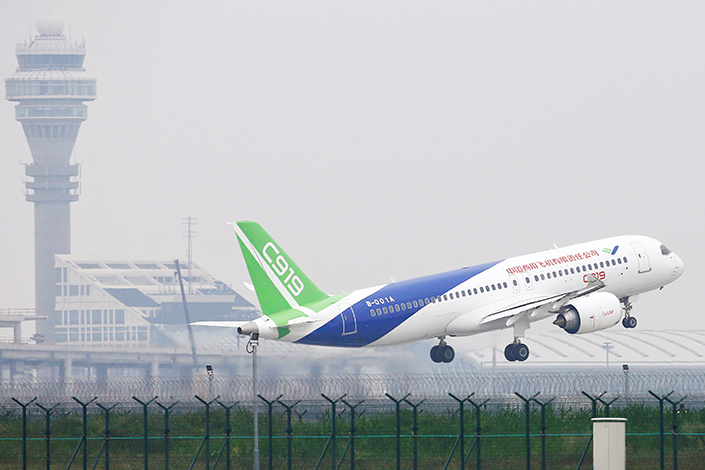 The C919 passenger jet, made by Commercial Aircraft Corp. of China, takes off from Shanghai Pudong International Airport during its maiden flight on Friday. Photo: Visual China

China’s first homegrown passenger jet made its maiden flight on Friday afternoon, marking a key milestone for the commercial airliner that aims to take on Boeing Co. and Airbus SAS.

Amid cheers and applause, the Comac 919 flew into the hazy skies of Shanghai Pudong International Airport at 2 p.m., operated by a crew of five pilots and technicians.

Designed and constructed by state-owned Commercial Aircraft Corp. of China (COMAC), the C919 symbolizes the nation’s ambition to compete in commercial-aircraft construction, where the world’s largest manufacturer has so far been absent.

Nearly 150 flights at Shanghai airport were delayed to make way for the C919’s 90-minute journey to eastern Jiangsu province and back.

The jetliner must still undergo a series of tests and inspections before it receives clearance to transport passengers. Even after it receives the necessary certifications, the first deliveries of the 570 orders for the aircraft are not expected until after 2020, as the mass production time frame for commercial jets of this size is usually at least five years, sources familiar with the industry said.

Comac hasn’t been focusing on an official delivery calendar as the 158-seat narrow aircraft has been delayed at every step. The first flight was behind schedule by nearly three years. When the first orders for the plane were announced in 2012, Comac slated the maiden journey for 2014.

The maiden flight of a smaller regional jet developed by Comac, the ARJ21, took place in 2008, after a three-year delay, which in turn pushed back the delivery date to buyer Chengdu Airlines to November 2015. The first commercial flights of the ARJ21 began in June.

China will have the largest number of air travelers by 2024, overtaking the U.S., the International Air Transport Association estimates. China is expected to see 817 million new annual passengers by 2035, when the yearly passenger total is expected to be 1.3 billion.

The demand for passenger and large cargo aircraft in China is set to reach 6,000 between 2016 to 2035, according to an Airbus forecast last year. China’s market, worth a total of about $945 billion, will represent 18% of global demand over the next 20 years.

Comac, based in Shanghai, was established with the goal of breaking the duopoly held by Airbus and Boeing. It says it is “realizing a centurylong dream and solemn duty to take homegrown passenger jets to the skies, shouldering the trust of the people.”

The C919 has been touted as a mass achievement of China’s industrial capacity since the first plane rolled off the production line in November 2015. Chinese media have said it symbolizes the ending of an era, “swapping 800 million shirts for a passenger jet,” alluding to China’s low-tech, labor-intensive manufacturing industry.

Despite being the symbol of homegrown technology, the C919 still largely relies on international suppliers for core components, such as Honeywell Aerospace, aircraft control system maker Woodward Inc., and French multinational Safran SA, which formed a joint venture with Airbus in 2015.