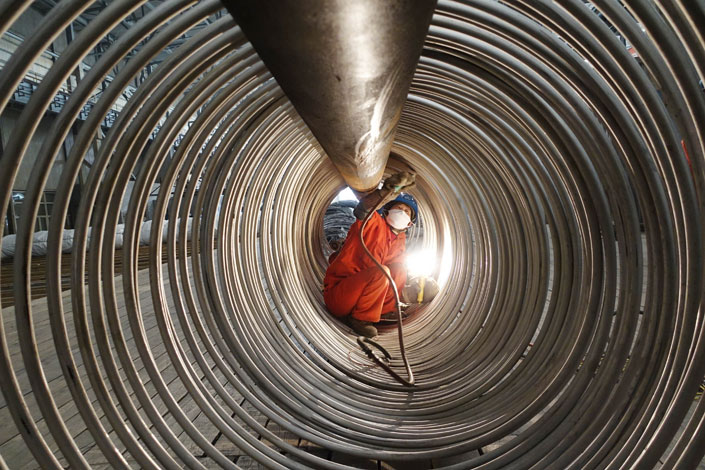 The Dongbei Special Steel Group, in Dalian, Liaoning province, owes banks a total 44 billion yuan. Half of that is owed to banks in Dalian. Photo: Visual China

Banks in the northeastern port city of Dalian in Liaoning province, where Dongbei is based, have about 22 billion yuan in credit exposure to the steel maker, which has defaulted on bonds 10 times since March 2016, Zhang Zhaojun said at a news conference held by the China Banking Regulatory Commission (CBRC) in Beijing on Thursday.

Zhang said most banks are already treating the sums borrowed as nonperforming loans. Dongbei defaulted on at least 7.2 billion yuan in bond principal payments, according to report by Securities Daily.

Dongbei is owned by the Liaoning provincial government and is based in China’s “rust belt” region in the country’s northeast, where a once-powerful industrial sector has been shrinking. The firm finally entered the bankruptcy restructuring process on Oct. 10. When a meeting was held in December by Dalian Intermediate People’s Court, 374 creditors claimed about 70 billion yuan in total debts.

According to a document drafted by Liaoning provincial government on tackling the debt crisis at Dongbei that came to light in July, the company’s debt-to-assets ratio had surged to 120% from the previously disclosed 85%, and its liabilities had jumped by 10 billion yuan to 55.6 billion yuan in May since September 2015.

Several bondholders told Caixin they had concerns that the local government had intervened in Dongbei’s bankruptcy restructuring process, and the lawful interests of creditors may have been undermined.

Under Chinese bankruptcy law, Dongbei must summit a restructuring proposal to the local court within six months after its formal entry into the bankruptcy reorganization process.

But in April, Fushun Special Steel Co. Ltd., one of Dongbei’s subsidiaries, said in a stock exchange filing that the local court had allowed the submission of the proposal to be postponed until May 10 on the grounds that the investor was a state-owned enterprise that needed more time to complete its restructuring plan.