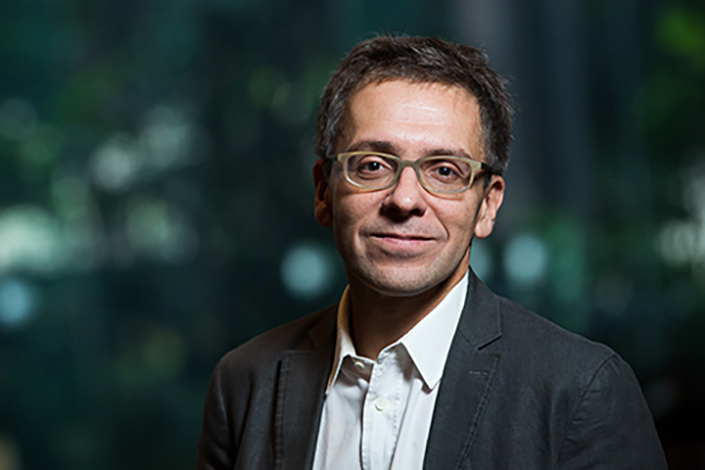 Ian Bremmer, president and founder of Eurasia Group Ltd., said he believes that Sino-U.S. relations could deteriorate under U.S. President Donald Trump because most people around Trump have a more-hawkish perspective on China. Photo: Visual China

Editor’s Note: Ian Bremmer, founder and president of U.S. geopolitical consulting company Eurasia Group, shared with Caixin reporter Zhang Yuan’an his views on China-U.S. trade ties and the two countries’ subtle play on the North Korea issue, as the two met on the sidelines of a China Business Forum hosted by the U.S. Chamber of Commerce in Washington on May 1. Bremmer said U.S. President Donald Trump did a good job handling the meeting with his Chinese counterpart, President Xi Jinping. But in the long term, Sino-U.S. relations can still go bad, as many people around Trump are hawkish about China.

Caixin: Do you think Trump supporters would give him more time to see what he could deliver? Longer than 100 days?

Bremmer: I would say Trump’s first 100 days have not been good. In fact, in many ways, it’s been worse than many presidents’ first 100 days. But I think he’s done a lot better than the media expected him to.

The most important meeting of his life was with Xi Jinping. And actually, it went pretty well. We should give him credit for it. And his first major military operation in Syria actually was pretty damn well-handled. Right? And (former national security adviser) Michael Flynn, who had no business in that position, was removed. And his replacement is actually pretty good — H.R. McMaster. Sebastian Gorka (a former deputy assistant to the president) had no business being a White House appointee; now he’s gone.

I think we need to understand although they’ve made many big mistakes, think the way they handled the executive orders on immigration — it was a disaster. And an active FBI investigation on the Russia stuff — that’s really bad.

But if you take the emotion out of it, you realize on a lot of domestic policies, he looks like most other Republicans. Stuff he’s saying about health care, infrastructure, and taxes, but not getting much done because it’s hard to get things done. But (his) executive orders generally (are) moving to be pro-industry, kind of like most Republicans.

And then on the foreign policy side, a few things that are really different, like not caring about the values of other leaders and other countries, which probably frankly is a problem for the U.S.; probably negative for a lot of our allies, for Germany for example, for Canada. But also a lot of the things he said he’s going to break, like NATO, or like Chinese currency manipulation, he’s backed away from.

You mentioned that you think the meeting between Xi and Trump went well. They have a deal to do a 100-days plan about economic cooperation to help reduce the U.S. trade deficit. What do you think the U.S. should push within that 100-day time frame? And what do you expect them to do?

Let’s also keep in mind that this is the most important point: that over last 30 to 40 years, American corporations have been going to China in a big way because they wanted to produce in China because Chinese manufacturing and labor was really big and really cheap. What we now know is that Chinese labor has become much more expensive. We know that Chinese competitors are becoming much stronger, so it’s harder for the Americans to get in. So in other words, if you ever want to play economic nationalism and tell the Chinese, “You either treat us better or we just don’t care much about China,” this is a much better time to do it. Because American corporations are much more interested in producing in the U.S. for the U.S. market than they are producing in China for the U.S. market. That’s really important.

Why hasn’t the Trump administration shown interest in a bilateral investment treaty between China and the U.S.?

It wouldn’t surprise me if that becomes something they eventually work on. I think that right now, first of all, (U.S. Trade Representative-designate Robert) Lighthizer has not been confirmed yet. So part of it is that the guy who is most likely to lead that hasn’t been driving it. But part of it is that they think the playing field right now to begin with is just too imbalanced. That’s the (National Trade Council Director Peter) Navarro and (White House Chief Strategist Steve) Bannon perception, and also Bannon does believe the conflict between U.S. and China is inevitable. So they want to push that confrontation early rather than later. That’s not about North Korea, which suddenly becomes this issue that maybe we could work on. So this whole “Mar-a-Lago Consensus,” if you want to call it that, sounds really good in the short term. But it could easily turn the other direction. If he doesn’t get what he wants in three or six months, he can turn against the Chinese very quickly.

On the North Korea issues, do you think that China already has started to team up with the U.S. to apply pressure?

I would not yet say there has been a lot of concrete cooperation. I would say that the atmospherics are positive. There has been some early initial positive development, but we are not remotely close to a resolution.

(North Korean leader) Kim Jung Un … is a smart cookie. The message is, “I have a problem with you, but I’m prepared to sit down to fix it with you.” In other words, this doesn’t have to be bad. This could be good. There are two ways. There’s a good Trump and there’s a bad Trump. Bad Trump might actually blow you up. Bad Trump might start a war. But there are good options.

So it’ll be a bilateral meeting between the U.S. and North Korea?

I think it’s certainly plausible if they do a meeting and there ain’t anybody else in the room. Maybe Ivanka (Trump) or a family member or something. That’s it.

Donald Trump and Ivanka Trump have had trademarks approved in China recently. Do you think he would go soft on China?

I think it was a big mistake for the Trump administration not to divest themselves of their conflicts of interest, precisely because it creates an opportunity for countries like China, the Philippines, Saudi Arabia and the (United Arab) Emirates to take advantage of U.S. national interest by spending money. It clearly goes against the ethics of the presidency, the ethics of the American political system.

You said you think it’s smart for Trump to say that he is willing to sit down with Kim Jung Un. Do you think he is smart to ask South Korea to pay for THAAD, the U.S. anti-ballistic-missile system that South Korea plans to deploy?

No. That was not a smart move. Two reasons. First of all, the South Korean election is coming up very shortly and this makes it more likely that the South Koreans will vote for someone who’s opposed to working with the United States. As you know, there are a couple of candidates, including the front-runner, Mr. Moon (Jae-in) from the central left, who is quite skeptical about the THAAD system. They will be more likely to move toward Beijing, which is not in America’s interest. Secondly: because U.S. national security adviser H.R. McMaster came out within 48 hours and contradicted the president, which means the president actually didn’t know what he was talking about. Trump literally was not aware that there is a South Korean election coming up, and that THAAD was a part of the political debate.

Japan is recently playing up the threat of North Korea to Japan, and that it might want THAAD deployment in Japan. Is the U.S. interested in doing so?

I don’t see why they wouldn’t be. I think the U.S.-Japan relationship under Trump is the best relationship that the U.S. has, maybe the best alliance they have now in the world, maybe after Israel. And you know it’s an important country. The focus is not on economics right now. They haven’t started any serious bilateral trade talks, but it’s been much more on security and military. (Japanese Prime Minister Shinzo) Abe wants to do more militarily. He’s talking about changing the constitution to allow that. And I think Trump has made very strong commitments to the Japanese and the bilateral treaty more so than Obama has. I think that’s quite possible to happen.

Does it mean that China’s relationship with Japan as well as South Korea will go bad?

Well, with South Korea, let’s see what happens with the election. South Korea’s relationship with China has gotten a lot worse in the past months economically because of the reaction to THAAD. My expectation is that it will normalize and stabilize after the South Korean elections. We had a very conservative South Korean government (in which the president) was impeached. Things will be very different. For Japan, the relationship between Japan and China has deteriorated. We’ve seen demonstrations in China, we’ve seen riots, economic trade go down. But it could happen again.

Do you predict the U.S.-China relationship will be better or worse under Trump administration than it was under the Obama administration?

It’s better right now. I don’t think it’s sustainable. I suspect it’s likely to be worse. If you would draw a curve, what they would normally call a normal distribution of good outcomes and bad outcomes, the really good outcomes and bad outcomes are quite small. I would say, first of all, with Trump, there’s a much higher likelihood of both really good outcomes and really bad outcomes. That’s true with most countries, but particularly true with North Korea, with U.S.-China, right? North Korea under Obama, nothing happened. It got slightly worse over time. Under Trump, it’s probably got slightly worse, but there is a much higher likelihood that it becomes a war or it becomes a deal. Either could happen. With China, there’s a much higher likelihood that the baseline relationship gets significantly better or significantly worse. But if you ask me to make a bet, I would say it’s probably going to get worse because most people around Trump have a more-hawkish perspective on China, on the defense side as well as on the trade and investment side.