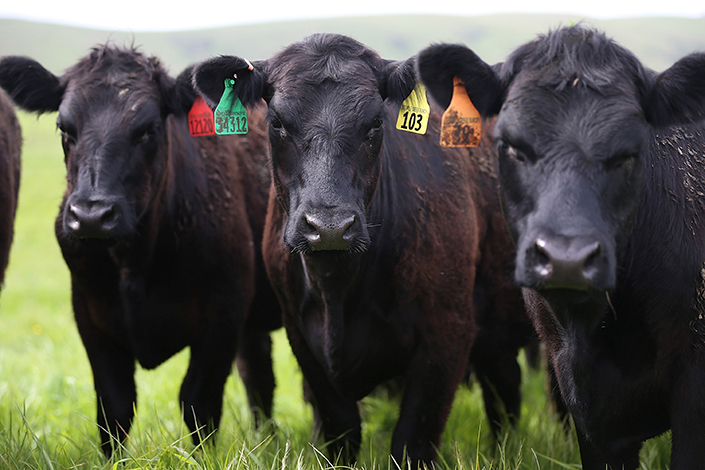 A new agreement between China and the U.S. will expand trade in beef and chicken and increase access in China to foreign financial services firms. Photo: Visual China

(Beijing) — China and the United States will expand trade in beef and chicken and increase access in China to foreign financial services firms as part of a broader effort to begin reshaping trade ties between the world’s two largest economies, China’s deputy finance minister said Friday.

The agreement that allows U.S. beef to be sold in China starting on July 16 and for cooked poultry from China to enter the U.S. market follows nearly 30 rounds of negotiations over the past four weeks, Zhu Guangyao said at the weekly news briefing organized by the State Council, China’s cabinet.

Trump administration officials have hailed the 10-part agreement, which also allows U.S. natural gas to flow into China, as a “herculean” accomplishment.

It will also open up parts of China’s tightly controlled financial services market for foreign competition. Beijing has agreed to issue guidelines to allow U.S.-owned card payment services “to begin the licensing process” in a sector that has been dominated by China UnionPay. Foreign-owned firms in China will also be able to provide credit rating services. It also promises to allow Chinese banks broader access to the U.S. financial market. China’s central bank and the U.S. Commodity Futures Trading Commission will work toward an agreement on the oversight of cross-border clearing organizations, the U.S Ministry of Commerce announced on Thursday.

The agreement marks the initial stage of a 100-day action plan that President Xi Jinping proposed during last month’s meeting with U.S. President Donald Trump in Florida. More deals, which cover areas including agricultural products and investment cooperation on infrastructure, will be included in the following stages, Zhu said.

U.S. Commerce Secretary Wilbur Ross said that over 500 items could potentially be discussed, and added that the deals would help reduce the massive U.S. trade deficit with China. But Zhu said the deficit has not been discussed so far.

Models for cooperation between Chinese provincial-level governments and American states will be part of the next round of negotiations, and measures to trim overcapacity will be covered in the third phase, Zhu said.

Zhu also said that the U.S. will send a delegation to participate in the Belt and Road Forum, as it has recognized the importance of the initiative to boost trade between more than 60 Asian and European countries. “The U.S. proposed to do so, not China,” he said.

The warming of ties between the world’s two largest economies is in sharp contrast to Trump’s earlier threats to label China as a currency manipulator. Zhu said negotiation teams from both countries have agreed not to politicize trade issues. Both teams have been working closely and cannot be “distracted” by political issues, he said.

The American business community in China welcomed the developments with caution. “This is a good beginning, but it’s not a breakthrough,” Iran Driscoll, director of communications and publications at the American Chamber of Commerce in Shanghai, told Caixin on Friday, adding that chamber officials won’t celebrate until these promises are followed through on, given past experiences with foot-dragging.