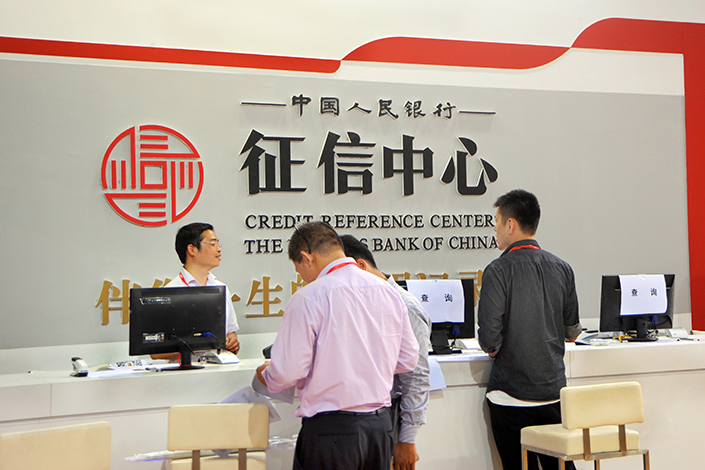 The Credit Reference Center, operated by the People's Bank of China, mans a booth at the 2015 China International Finance Exhibition in Shanghai in October 2015. The credit-reporting system was established in 2006, and the central bank opened the business to private companies in 2015. Photo: IC

(Beijing) — China appears to have a long way to go before it can fully achieve its ambition to develop a third-party credit-reporting industry.

That is despite the People’s Bank of China handpicking eight Chinese companies for a pilot project more than two years ago.

“The preparation the eight companies have made for running the personal credit reporting business is far below market demand and regulatory standards,” said Wan Cunzhi, the director of the PBOC’s Credit Information System Bureau, during a conference about credit reporting held in Beijing in April. “It’s fallen short of our expectations that none of them has made it yet.”

In 2015, the central bank gave the green light to open up the credit reporting industry to companies.

The handpicked companies picked included Sesame Credit Management Co., a subsidiary of Ant Financial Services Group; Tencent Credit Services, and Shenzhen Qianhai Credit Service Co. Ltd. The PBOC originally gave the companies six months from January that year to prepare, saying it would decide on whether to grant a license based on how much the applicant company achieved.

The central bank assessed their preparations, but to date not a single license has been issued.

“A license will not be granted before the companies meet regulatory standards,” Wan told Caixin reporters. “And the personal credit-reporting market should never be allowed to turn messy before regulators step in.” Wan made his remarks to Caixin in his exclusive media interview after he became the director of the central bank’s credit bureau in April 2016.

Big Data Is Not Credit Reporting

The central bank’s credit bureau wants to be responsible for collecting the credit information from licensed financial institutions such banks and fund management companies, while the newly set up credit-reporting companies will particularly focus on sources such as e-commerce companies and peer-to-peer (P2P) lenders, Wan said. The results generated by both types of credit reporting agencies can be accessed by banks and other institutions.

“Banks told us some credit reports were not very accurate,” Wan said. Totally distinct credit assessment results could be seen in sample data of a consumer randomly selected from the central bank credit bureau and the eight credit reporting candidate companies, he added. “It is not uncommon to see companies give a high credit score to a certain consumer, while the central bank credit bureau found out he is not creditworthy at all,” Wan said.

One of the main reasons for the inaccuracy is that the eight companies can tap a pool of credit information barely wider than their own respective user bases, Wan said. Most of these companies are developing individual credit reporting services based on so-called big data technology, which will provide lenders, merchants and other credit information users with a tool for assessing their customers’ creditworthiness.

“Both companies are backed by internet giants, and have strong data analysis capability, but the goal of eliminating financial risks cannot be achieved if there is heavy reliance on the credit scoring results produced by these companies,” Wan said.

In fact, users of the credit reports aren’t confident in the assessments sold by the eight candidate companies.

“Whether it is Tencent Credit, Sesame Credit, or any other credit-scoring agencies, we assign only about 10% weighting on their reports when we assess the creditworthiness of our clients, even though these two companies may represent the best big-data providers in China,” said a risk-control executive at CreditEase Group, which runs a wealth manager and P2P lenders.”

Tony Lythgoe, head of the financial infrastructure department at International Finance Corp., said there should be a crucial distinction between big data and credit reporting.

He told Caixin reporters that China is basically the only country in the world that develops credit scoring services with big data technology. “But it is difficult to ensure the accuracy of the data that are gathered from places such as social network websites,” he said.

One of the major hurdles that these eight companies need to get over is the fact they are all affiliated with other corporations. He stressed that it is taboo for companies to operate as both providers and users of the credit-reporting services at the same time, and each company must have a diversified shareholding structure to avoid overwhelmingly large equity stakes held by only one or two owners.

Currently, shareholders of the eight companies that are seeking a credit-reporting license run credit-lending or investment businesses. Tencent Holdings Ltd., the owner of Tencent Credit, launched the country's first private internet bank, WeBank, in 2014. Ant Financial, the parent company of Sesame Credit, also runs internet bank MyBank, as well as online payment service Alipay and a marketplace lending platform. And Qianhai Credit is a subsidiary of Ping An Group, one of China’s largest finance conglomerates.

Wan said credit reporting should be strictly concerned with the money flows, assessing borrowers’ ability and willingness to meet their financial obligations. But in practice, several credit-scoring companies offer the data for purposes other than merely lending and borrowing. Consumers with higher credit scores will have access to benefits unavailable to those with lower ones — including waivers for car rental deposits, or even a higher chance of success in a blind date organized by matchmaking service providers.

Wan looks to have a tough challenge in making a final decision on whether the credit-reporting licenses should be granted. He said that given that the internet financial sector in China is still not risk-free even though the top regulators are stepping up efforts to tame it, regulators are not sure how to steer the development of the third-party credit reporting business.

“Even though consensuses about some fundamental issues have already been achieved as the credit reporting service started developing in other countries more than a century ago, it is still worth a profound contemplation about the trial probation that the eight companies are running and whether it has caused a waste of social resources and disrupted the market order,” said an experienced professional in the credit-reporting industry.

Now that each of the eight companies has had some problems with the formal credit-reporting business, Wan suggested it would not be a bad idea for them to jointly establish a giant credit agency that covers different sources of credit records. Otherwise, too many similar credit agencies will result in a fragmented market, and it will be hard to share credit information widely.

Wan said the number of credit-reporting agencies will be strictly controlled, and new credit-reporting companies are encouraged to focus on consumers with limited credit records from commercial lenders, and extract data from areas that are not well-covered by the PBOC’s credit scoring system, including the P2P lending sector.