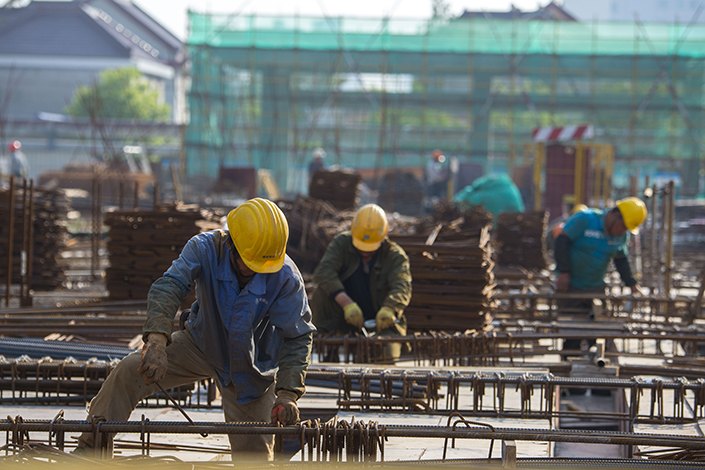 (Beijing)–China’s economy showed signs of slowing in April as increases in the key activity indicators of industrial production, investment and consumption all softened, adding to evidence that intensifying government measures to curb property bubbles and financial risks are taking effect.

While property and government-led infrastructure investment remained solid, growth in manufacturing and private sector investment lost steam, power generation rose at a slower pace and demand for many consumer goods moderated as the housing market cooled, data from the National Bureau of Statistics (NBS) showed on Monday.

China’s gross domestic product rose by 6.9% in the first quarter year-on-year, the second-straight quarterly acceleration and well above the government’s full-year target of around 6.5%.

Stronger expansion has allowed policy makers to switch their focus away from stimulating growth and toward curbing risks and debt, especially in the financial sector. But with the pace of economic expansion now slowing the government may only have a short window of opportunity to keep pushing its campaign before it needs to refocus on growth.

“The recovery, which is driven by reflation, restocking and real estate, has passed its peak for sure,” Larry Hu, a Hong Kong-based economist with Macquarie Capital Ltd., said in a research note, although the economy is “still doing OK for now.”

“The next couple of months remain the window for policy makers to deal with financial risks,” he said. “But they will have to spend more time on supporting growth from the third quarter, as the 6.5% bottom line would be tested in the fourth quarter.”

In April, industrial output growth slowed sharply to 6.5% year on year from 7.6% in March, the data showed, trailing a median forecast of 6.9% growth in a Caixin poll of economists.

Fixed-asset investment excluding rural households climbed 8.9% year on year in the January-April period, down from an increase of 9.2% in the first quarter as gains in private and manufacturing investment weakened.

Retail sales, which include expenditure by households, government departments and business and exclude spending on services, rose 10.7% in April year-on-year, down from 10.9% in March.

Property investment growth picked up slightly in the January-April period from the first quarter on the back of a recovery in commercial real-estate development and higher land purchase costs.

Investment in residential property development, which accounts for about two-thirds of total real estate investment, moderated to 10.6% in the January-April period from 11.2% in the first quarter, as an increasing number of local governments imposed controls on purchases to cool surging prices. New housing starts rose by 17.5%, easing from 18.1% in the first quarter, and growth in completions slowed sharply to 8% from 13.7%, although homes under construction ticked up to a 2.5% pace from 2.2%.

NBS spokesman Xing Zhihong cautioned that the solid real estate investment spending was due mainly to the funding of ongoing projects that started during the property market boom last year and the increase in land supplies in first-tier cities to contain price surges. Land-purchase costs by developers jumped by 34% in the first four months, double the pace of the first quarter.

“Property investment growth is cyclical,” he said at a briefing. “We need to keep an eye on how it develops.”

Government-led infrastructure investment held up well, rising 23.3% in the first four months, leading to an improvement in output of construction materials such as steel, cement and glass, NBS data showed.

But growth in private investment, which accounted for 61% of total fixed-asset investment excluding rural households last year, slowed to 6.9% year on year in the January-April period from 7.7% in the first quarter.

“For now at least, infrastructure and property investment are holding up, helping to stave off a sharper deceleration,” Julian Evans-Pritchard, an economist with research firm Capital Economics, said in a note. “But we doubt the current strength in these areas can be sustained given that policy is being tightened and the property market is starting to cool.”

The cooling housing market is already having a knock-on effect on demand for household goods–growth in sales of “white goods,” such as refrigerators, and building and decoration materials edged down in April.

Retail sales were also held back by the continued impact of the government’s decision to reduce tax incentives on the purchase of small-engine cars. Auto sales growth slowed to 6.8% year on year from an 8.6% gain in March, according to NBS data.

Slowing demand is affecting production, with output of sedans falling 8.3% year on year in April after a 4.8% drop in March.

Smaller increases in the production of consumer goods such as computers and smartphones led output growth in the manufacturing industry to dip to 6.9% year on year in April from 8.0% in March. Manufacturing investment also rose at a weaker pace of 4.9% in the first four months of the year, down from 5.8% in the first quarter.

Most analysts expect economic growth to edge lower over the rest of the year due to the impact of the government’s campaign to rein in debt in the financial sector and the slowdown in the housing market.

Containing risks and curbing leverage have moved higher on the government’s agenda as concerns have grown about the dangers hidden in the opaque and increasingly complicated financial system.

President Xi Jinping renewed a pledge last month to safeguard financial stability and prevent systemic risks, and the China Banking Regulatory Commission embarked on a campaign to crack down on irregularities in the financial sector and shadow banking industry, particularly wealth management products issued by commercial lenders. It has also increased scrutiny of activities in the interbank market, especially bonds issued by smaller commercial banks which are being used to increase leverage ratios.

The central bank has raised interest-rates in the money markets but has yet to increase benchmark lending rates, as it tries to engineer financial deleveraging without affecting activity and growth in the real economy. All of these actions have led to higher funding costs and a squeeze on liquidity, which analysts expect will cool lending.