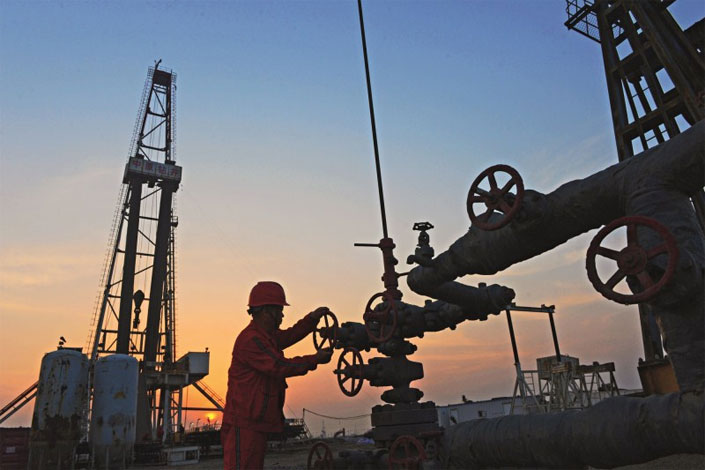 China’s oil majors described their new confidence in the context of global and domestic market developments.

CNPC, the country’s top oil and gas explorer, said 75% of this year’s investments will target drilling and extraction projects at home and abroad in order “to stabilize oil exploration volume while increasing natural gas reserves.”

The company said it will boost capital spending 11% to 191 billion yuan this year after four consecutive years of investment cuts. The company scaled back considerably after splashing out 352 billion yuan in 2012, and said it cut investment last year “due to oil price fluctuations and market changes.”

CNOOC, which focuses on offshore extraction, unveiled plans to spend between 60 billion and 70 billion yuan this year — a range reflecting a 40% increase from last year’s all-time low for new investment.

“Looking forward to 2017, the global economy will continue to recover slowly and international oil prices are expected to stay at a relatively low level despite a certain rebound,” according to CNOOC’s annual report. “The company remains confident and persistent.”

And Sinopec, a downstream supplier specializing in oil refining and retail sales, said it’s moving forward with 110 billion yuan in new spending this year. About half of that amount will be used to target oil exploration and extraction.

“Looking forward to 2017,” Sinopec said, “the global political and economic environment is becoming more complicated, and global oil prices will still fluctuate at a low level.”

Nevertheless, Sinopec is upbeat about its domestic business, predicting “more positive changes” for the China market as “demand for oil and petrochemical products will grow at a relatively fast pace.”

The confidence shared by China’s oil companies is set against the backdrop of price pressure for global crude prices and production cuts by the OPEC bloc of oil-producing nations and partners.

“Last year’s big rally in oil markets was triggered initially by confidence that two years of financial pain was forcing OPEC to shift strategy and support prices,” according to an analysts’ report.

While projecting confidence, CNPC and CNOOC are trying to put 2016 financial nightmares far behind them.

CNOOC’s crude reserves declined nearly 10% from 2015 levels to 3.9 billion barrels of oil at the end of 2016. Chief Financial Officer Zhong Hua cited low crude prices and high production costs for the change. Moreover, output was affected by a pipeline break in 2015, an explosion early last year, and a devastating wildfire in May 2016 at an oil-sands project in Canada that’s now partly idled. It is undergoing repairs, CNOOC President Yang Hua said.

Sinopec, meanwhile, hopes to build on last year’s success, underscored by a 43% increase in 2016 earnings from the previous year to 46.7 billion yuan. The company, which cut inventories 31% from 2015 to 1.5 billion barrels last year, benefited from the gap between fluctuating crude prices and retail prices in China, which are set by the National Development and Reform Commission (NDRC).

The NDRC, which reviews prices for possible adjustments several times every year, decided in January 2016 to freeze retail prices in China if the global crude price fell below $40 per barrel. Prices dipped below that level in early 2016 but have since rebounded overall.

While pursuing separate investment strategies this year, each of the Big Three has been following a different path.

“New investments are aimed at retaining production capacity,” said a staffer at CNPC’s oil exploration department who asked not to be named. “A new well can’t be put to use within the year it’s drilled, so we should plan ahead.”

Complementing Sinopec’s major refineries in Shanghai and the provinces of Guangdong, Zhejiang and Jiangsu are an oil refining plant and 820 gas stations recently acquired in Africa. The company agreed to buy the facilities in South Africa and Botswana from Chevron for $900 million in March.

Meanwhile, CNOOC plans to target countries outside China for 48% of all asset investments this year. Over the next two years, Yang said, the company plans to develop deep-water offshore drilling projects in the Gulf of Mexico’s Stampede and Appomattox fields as well as Nigeria’s Egina field.

Given the current market climate, there’s no guarantee that the investment plans rolled out by the Big Three will pay off.

ExxonMobil Corp., on the other hand, says it will boost investment 15% to $22 billion this year. And BP PLC’s 2017 investment target is $16 billion to $17 billion, similar to last year’s.

A recent rebound for crude oil prices is no reason for excessive optimism as there is still a glut, said Yuan Guangyu, a CNOOC deputy general manager.

The future direction of crude oil prices may depend on ongoing OPEC supply decisions. OPEC member Saudi Arabia and Russia agreed May 15 to extend current output cuts until March 2018, Reuters reported. Other OPEC members were expected to decide whether to match that pledge by the end of June.

“The key question for 2018 supply is the return of OPEC and Russian production,” according to a Wood Mackenzie report. “Full return would result in a strong surge in supply, with output rising by 2.4 million (barrels per day) in 2018.”