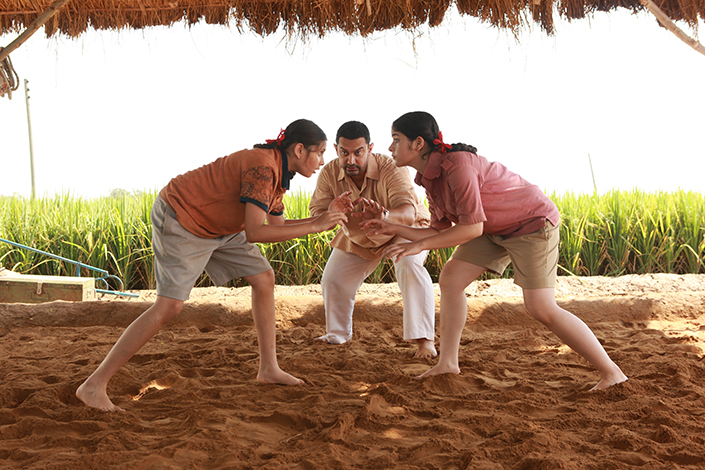 A promotional image for "Dangal" shows the father teaching his daughters how to wrestle. Photo: IC

Dangal, an inspirational tale based on the real-life story of a retired wrestler who coaches his two daughters to become world-class grapplers, has raked in 838 million yuan ($122 million) in fewer than three weeks after opening on May 5, according to box office tracker Maoyan.

The previous top-performing non-Hollywood foreign film was the 2016 Your Name, a Japanese fantasy drama. It made 577 million yuan at the Chinese box office.

Indian cinema, which was popular in China in the 1960s and ‘70s, is starting to make inroads into the world’s second-largest film market after a long hiatus. The Hindi language production has topped the box office in the nation for the past two weeks, prevailing even as it faces stiff competition from Marvel’s Guardians of the Galaxy Vol. 2 and the star-studded sci-fi horror film Life.

The film has won the hearts of China’s moviegoers with its resonating themes of tough parenting and feminism. Dangal has also become an unexpected hit partly because Chinese audiences have over the years become well acquainted with and fond of leading actor Amir Khan.

“The themes in the film, such as women’s rights and family expectations, are universal, and easy to relate to,” says Ding Daoshi, a film market analyst based in Beijing. “But because of film censorship here, many of these social problems cannot be openly discussed cinematically,” he says.

A struggle for women to become masters of their fate is still very real in many places in China, he says, and viewers enjoy films that touch on pressing social issues such as education, oppression, and gender equality with a dash of irony. “Korean and Indian productions have quickly gained ground in China, because these Asian countries share similar underlying values,” he said.

The younger demographic also sees their own childhood in scenes in which the father, played by Amir Khan, instills in his children his unfulfilled ambitions, a common value in China.

“Many people share memories of being forced to take piano lessons or other extracurricular activities, and trying hard not to let their parents down,” says one user named Zhaoxiaohe on Weibo, China’s Twitter equivalent.

Dangal, a no-frills production without the singing and dancing that has come to typify Bollywood flicks, is also the second-highest-grossing Indian film worldwide, with a global box office of over $240 million, closely followed by historical fiction film Baahubali 2 released this year.

Dangal’s record-breaking run in China is also largely due to the reputation of Indian actor and filmmaker Amir Khan, who made his name here in 2009 with Three Idiots, a tongue-in-cheek take on India’s high-pressure education system that promotes rote learning instead of critical thinking. Three Idiots remains one of the most highly-acclaimed films in China, ranking 12th out of the 250 best-loved films ranked by users of Douban, a film review website.

However, neither Three Idiots nor the 2014 film PK were shown in cinemas, and viewers know Khan through bootlegged DVDs or pirated downloads. Dangal is Khan’s debut on China’s silver screens.

“China loves him. They feel like they owe him a movie ticket,” says Ding.