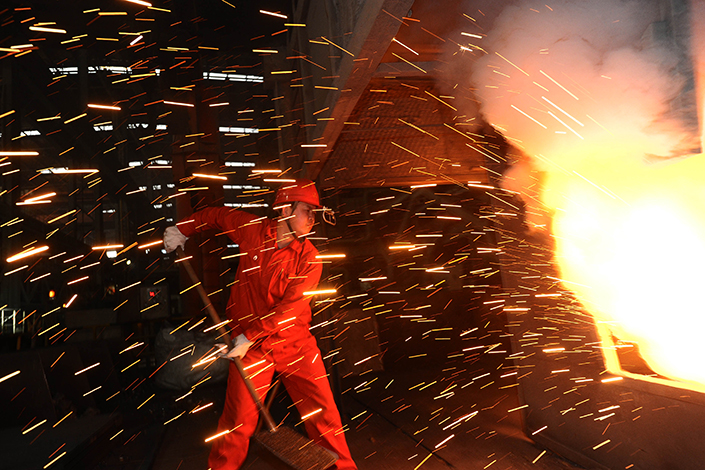 A worker adds deoxidizers to a steelmaking furnace in a factory of Dalian Iron and Steel Company, in Dalian, Liaoning province, China, on March 27. Photo: Visual China.

(Beijing) — Only one of 10 struggling steel makers that agreed to join a Beijing-backed debt-relief program have reached agreements with their lenders so far, due to concerns that relief plans could be more costly than the companies’ current debt.

The debt-for-equity program proposed by Beijing would allow loss-making steel makers to give stock to their lenders in exchange for debt relief. But steel makers have been reluctant to join due to lenders’ attempts to add hidden costs that would make relief more costly than simply paying interest under current loans, observers said.

Such hidden costs could include required dividends attached to the new stock that lenders would receive under the debt-for-equity swaps, they added.

Of the 10 steel makers that have agreed to join the plan, only Shandong Iron and Steel Group Co. Ltd. has signed an agreement with Industrial and Commercial Bank of China (ICBC) last week. The deal allows the state-owned company to give an equivalent amount of its stock to ICBC to cover 26 billion yuan ($3.8 billion) worth of loans it is struggling to repay.

“The debt-for-equity swap can effectively improve the company’s debt structure and therefore reduce liabilities,” Shandong Iron and Steel said in a company statement published on its official microblog. The swap will cut the company’s debt-to-asset ratio by 10%, according to Dazhong Daily, an official newspaper of Shandong province.

But many similar agreements are being held up by banks’ desires to get regular annual payments as part of the package, making such plans little more than “fake equity but real debt,” said Chen Qianyu, director of financial asset department of China Iron and Steel Industry Association.

Most of the debt-for-equity swap agreements signed between banks and steel makers carry payment requirements that equate to interest payments of about 5.2% of the cancelled debt, said Chen. But interest rates on the loans being exchanged for equity in the program mostly carry interest rates below 5%, he said, discouraging most from moving ahead with the program.

The State Council, China’s cabinet, raised the curtain for the debt-for-equity swap program last September 2016, looking for ways to help struggling sectors like steel and coal weighed down by big piles of debt. But the government plan didn’t lay out guidelines for payments like dividends that banks might try to secure as part of the debt-for-equity swaps.